Review of Vincent Bevins’s The Jakarta Method: Washington’s Anticommunist Crusade and the Mass Murder Program that Shaped Our World 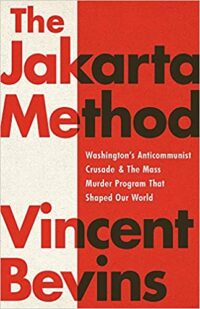 Prepare to read Vincent Bevins’s The Jakarta Method in one sitting because it’s impossible to put down. The book is a summation of the US government assisting the Indonesian military in killing approximately one million civilians from October 1965 through March 1966.

While the Vietnam War got most of the headlines, in Indonesia the world’s third largest communist party was winning hearts, minds and elections — much to the alarm of the United States. After years of cultivating and training the Indonesian military the US decided it was time for the Indonesian working class to put away childish things like land reform and resource nationalization. The two-million strong (but fatefully unarmed) Indonesian communist party, the PKI, had to be exterminated “down to the roots.”

The mass murder starts on October 7 on Sumatra with a fanatical anticommunist commander named Ishak Djuarsa who trained at Fort Leavenworth. The police and military arrest leftists and their sympathizers en masse. Trusting peasants and factory workers turn themselves in for what they think is routine questioning and are never heard from again. For mass murder to spread so quickly it’s necessary for ethnic and religious fault lines to be exploited and “ordinary” citizens to directly participate in the killings, often under the threat of being killed themselves.

Most of the killings were summary executions done with knives, swords, machetes, sickles and spears. The flow of small rivers and streams was disrupted by too many dead bodies. Rape, torture, gendered violence, castration and dismembering alive swept across the 17,000 island archipelago from Banda Aceh to Papua. The US provided arms, training, communication equipment and lists of thousands of real and alleged leftists to be killed. US-owned plantations furnished lists of “troublesome” employees. US officials repeatedly sent cables to the leader of the butchery, General Suharto, to kill the leftists faster.

The Indonesian military “pioneers” “disappearing” people and, before 1966 ends, this will be a tactic of state terror in Guatemala. Soon right-wingers are scrawling “Jakarta is coming!” on walls throughout Latin America. 1968 brings the Phoenix Program (50,000 killed) in Vietnam and in the 1970s Chile adds the new twist of extra-territorial assassination in Operation Condor. The 1980s bring the Nicaraguan contras (50,000 killed) and Salvadorian death squads (75,000 killed.)

The “Salvador option” migrates to Iraq in 2004 with the US creation of the Wolf Brigade death squad, overseen by some of the same villains in the Central American bloodshed: James Steele, John Negroponte and Elliott Abrams. The Obama-backed 2009 Honduran coup catapults that nation into the number spot in the world for the killing of labor leaders, land reformers and journalists. As I write this the police and paramilitaries of US client narco-state Colombia are gunning down unarmed protesters in the streets of Cali.

It was one big capitalist party as US media and nearly all politicians cheered on the deaths of “communists” (union organizers, teachers, journalists, students, land reformers) and, after the peace of the dead was established, US oil companies flocked into Indonesia. “Communism” (i.e., the working class majority helping itself) had been “turned back” in the fourth most populous nation on earth. Capitalism’s bloodthirsty media soldiers, like “liberal” New York Times columnist James Reston, called the slaughter “A Gleam of Light in Asia.”

Besides the million Indonesians murdered, another million were sent without charge or trial to prison camps for decades. Unlike truth and reconciliation commissions established in other countries following government atrocities, every Indonesian government since 1965 has been proud of the slaughter. Westerners party today on Bali beaches where 56 years ago massacres of 80,000 Balinese took place and bones and skulls still wash up. To give a flavor for the madness of the Indonesian ruling class since 1965 — which included killing 300,000 people in East Timor between 1975 and 1999 — it’s best to just quote Bevins:

Much worse things happened than this to the families of communists and accused communists. In Indonesia, being communist marks you for life as evil, and in many cases, this is seen as something that passes down to your offspring, as if it were a genetic deformity. Children of accused communists were tortured and killed. Some women were prosecuted simply for setting up an orphanage for the children of communist victims.

In January 1966 Robert F. Kennedy became the only prominent US politician to speak out against Suharto’s carnage. With the Kennedys, though, we always get a dose of historical whiplash as, earlier in the book, RFK and JFK debate sending in marines to overthrow the government of the Dominican Republic. They veto this as too obvious but Bobby helpfully suggests blowing up the US consulate themselves as a pretext to invade. (According to Ron Ridenour’s Russian Peace Threat, Robert Falseflag Kennedy also suggested a similar “Remember the Maine” incident to justify directly attacking Cuba during the missile crisis.)

Early in the book there are a couple revealing anecdotes about Chinese leaders trying to talk sense into Indonesia’s charismatic but overconfident President Sukarno.

Chinese Premier Zhou Enlai tells Sukarno that he should have his own armed working class militia apart from the military: “The militarized masses are invincible.” Che told Guatemalan leftists the same thing in 1954 but neither Sukarno nor Arbenz did this and their working classes paid dearly. (Decades later Venezuela’s Hugo Chavez creates the armed Bolivarian Militia of 3.3 million men and women, probably staving off a direct US invasion.)

Chairman Mao also warns Sukarno that he’s too complacent about the Indonesian military. Mao remains the only leader in history to overthrow his own government and Bevins posits that the bloodbath in Indonesia was a partial impetus for the 1966 Cultural Revolution to purge any bourgeois elements.

In another early chapter, Richard Nixon admits in private that communists and socialists improve people’s lives and will win elections — if the US lets elections be held. Nixon said this in 1955 about Indonesia and again in 1970 about Allende’s Chile. Over and over, it’s the “good example” of different economic systems that the insecure US ruling class fanatically seeks to crush. The US system has never been able to “compete” without bombs, bribery, brainwashing, blackmail and bullets.

And you know what? It all worked — just like the FBI exterminating the black left “worked” in the 1960s and 1970s. Today, everywhere, whether Indonesia or the United States, we see the triumph of capitalism: staggering wealth inequality, environmental devastation, endless wars, police impunity, masses ground down to subsistence, homeless people under every bridge, tens of millions afraid that an illness or injury will bankrupt them, indebted, pauperized, surveilled and censored.

In Youtube interviews Bevins, currently a reporter for the Washington Post, wonders if we’ll look back on the present and see other ignored atrocities. Considering that the Washington Post supported the US destruction of Iraq, Libya and Syria, the decades-long and ongoing hammering of Cuba, Iran and Palestine, and the scrupulous ignoring of six million people killed in the Congo by US-ally Rwanda — I’d say we don’t have to wonder.

What I’m wondering is when Bevins is going to write a story in the Washington Post about the illegal unconstitutional dirty war the US is currently waging on Syria, the illegal occupation of one third of Syria, the US theft of Syria’s oil and wheat, the US sanctions which only punish the Syrian working class, the US/UK domination and corruption of the Organization for the Prohibition of Chemical Weapons, the US military’s care and feeding of takfiri fanatics and US Congressional complicity in war crimes. Maybe 50 years from now it will be “safe” to tell Syria truths.

Randy Shields can be reached at music2hi4thehumanear@gmail.com. Read other articles by Randy, or visit Randy’s website.