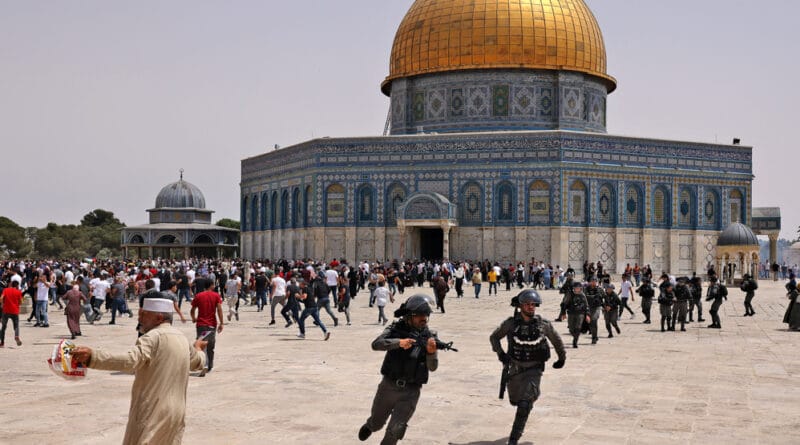 Israeli forces stormed the al-Aqsa Mosque compound in Jerusalem al-Quds in a move condemned as “provocative” amid international efforts to de-escalate tensions in the occupied Palestinian territories.

Eighty Palestinians were injured as Israeli forces stormed al-Aqsa Mosque after noonday prayers on Friday, May 21, and fired sound bombs and rubber bullets at worshipers.

The Israeli troops also arrested a number of young people, some of them wounded, at Bab al-Asbat (Lions’ Gate) during the raid, and prevented medical staff from attending to the wounded.

The Palestinian presidency condemned the Israeli regime’s storming of al-Aqsa and its attack on the worshipers as an “unacceptable provocation.” It also urged the international community to exert pressure on Israel to stop its violations and attacks on Muslim holy sites.

Jordanian Foreign Ministry spokesperson Daifallah al-Fayez said in a statement on Friday that the storming was “a condemnable and unacceptable provocative act” that defies the international efforts that were made over the past days to put an end to violence and escalation in Jerusalem al-Quds and the occupied Palestinian territories, and to stop the aggression on Gaza.

Israeli forces stand guard over detained Palestinians at the entrance of the al-Aqsa Mosque compound on May 21, 2021, after new clashes between Palestinian worshippers and Israeli forces inside the grounds of the historic site. Photo AFP.

An Egyptian-brokered ceasefire went into effect in Gaza at 2 am on Friday after 11 days of Israeli aggression.

Friday also saw several protests across the occupied West Bank in support of al-Quds and the victims of Israeli aggression on the besieged Gaza Strip.

Israeli forces also used live ammunition and rubber bullets against the Palestinians who rallied in Tubas in support of their fellow countrymen in Jerusalem al-Quds, and arrested a young man after physically assaulting him.

Meanwhile, a Palestinian was hit with live bullets during clashes in the village of Bita during a rally to protest against the establishment of a settlement outpost there.

In the village of Kafr Qaddum, three Palestinians were hit with rubber bullets and tens of others suffered breathing difficulties due to tear gas fired by Israeli forces at an anti-settlement protest.

More than 600,000 Israelis live in over 230 settlements built since the 1967 Israeli occupation of the West Bank and East Jerusalem al-Quds.

All Israeli settlements are illegal under international law as they are built on occupied land. The United Nations Security Council has condemned Israel’s settlement activities in the occupied territories in several resolutions.