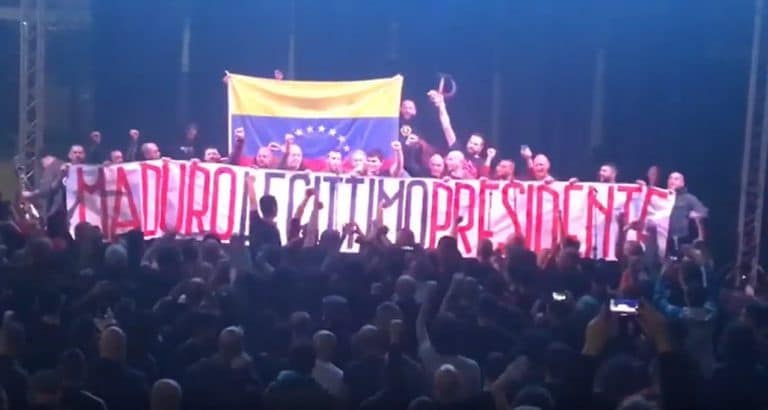 The Italian group of ska Banda Bassotti issued a moving message of support for the Bolivarian revolution and President Nicolás Maduro, as could be seen in a video uploaded by the group itself. The message of support, given at a concert in the Italian city of Livorno, was issued on February 23. There they displayed a large banner with the message “¡Chavez present, Maduro Presidente!”. The Italian boxer Lenny Bottai, a native of Livorno and known for his Marxist ideology, was on stage and also said a few words in support of Maduro.

Bottai, who at the time won the titles FIB, IBO and champion of Italy in the Superwelter category, said from the platform that one does not have to give faith to the imperialist media, which lie without dignity about Bolivarian Venezuela and its legitimate government.

The concert was held in Livorno, the city where the first Italian Communist Party was founded in 1921, said militant Ciro Brescia.

Venezuelan Foreign Minister Jorge Arreaza thanked the support through his Twitter account . “Solidarity with the independence, the peace of Venezuela and the Bolivarian Revolution in Italy. Grazie mille, Bassotti Band, “he tweeted.

The same was done by the European Network of Solidarity with the Bolivarian Revolution through its account @redeuropave .

La Banda Bassotti is a group of Italian ska punk, born in the peripheral area of ​​Rome in 1987. It is a group with openly political and left-wing lyrics, focusing on communist and anti-fascist themes, with some songs about Ireland and Latin America. The group has achieved success in Italy and Spain and has published 14 albums.