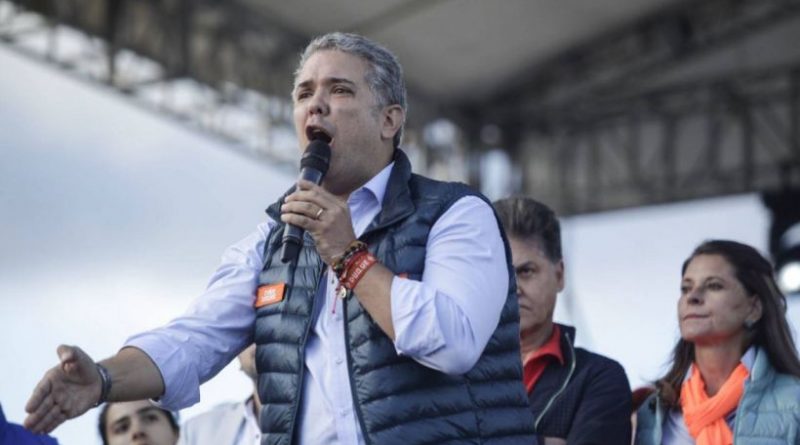 Since the return to power in Colombia of Uribism through the election of Iván Duque, the story that there is a supposed “narco-state” in Venezuela has deepened.

This political and informative treatment has escalated in recent months to project Venezuela as a “sanctuary” of “terrorist groups of Colombian origin”, and specifically the government of Venezuela as a “threat to the security of Colombia and the region.”

In this way, the rhetoric of the Colombian government seeks to hold Venezuela accountable for the inability to resolve its two outstanding historical debts: the reduction of drug trafficking and the control of paramilitarism that daily takes the lives of social fighters and political leaders and prevents a political and institutional solution to the armed struggle.

But a brief review of recent events allows us to see that, in the wake of the rhetoric displayed by Duque’s government, the Venezuelan state has intensified its fight against drug trafficking and paramilitarism, both phenomena that significantly impact Venezuela by inserting itself as part of the destabilization gear and continued coup.

In this field, the Duque government has few achievements to exhibit, and perhaps from there comes part of its annoyance and aggressive behavior towards the Bolivarian Republic of Venezuela.

THE LAST BLOWS OF VENEZUELAN SECURITY TO THE BORDER MAFIAS
Preventing the recurring coup attempts that rely on the structures of criminal groups of Colombian origin, the Venezuelan government has been designing a security policy to reduce the mobility and deployment that these armed fronts have on its border.

It is well known that attempts to change the regime in Venezuela have an organic link with criminal and paramilitary violence, and this has been demonstrated in the unconventional coup cycles developed from “La Salida” (2014) to the present.

A small evidence: the frustrated assassination attempt against President Nicolás Maduro on August 4, 2018 was planned in the department North of Santander, with the consent of the Colombian government, which allows the existence of the entire ecosystem of paramilitary groups and underground economies operating in Cúcuta and surrounding areas.

From that event until today, communications from the Minister of Communication, Jorge Rodríguez, have become increasingly frequent, showing with evidence how armed groups and criminals participate directly in each national and foreign coup plot.

In recent weeks, when the most diligent ally of the United States raised the stake by falsifying news to involve the Bolivarian National Armed Forces (FANB) with Colombian guerrilla groups, the country responded by activating the orange alert on the Colombian border.

This measure preceded the call to the military exercises “Venezuela Sovereignty and Peace 2019”, and was accompanied with the activation of the National Defense Council (Codena) to assume the leadership of a new stage of conflict in relations between Colombia and Venezuela.

In less than a month, more than 150 thousand military personnel deployed along the western border of the country present the following results:

Of the actions in the framework of the “Venezuela Sovereignty and Peace” exercises, the capture in the northern part of the Táchira state of the Colombian paramilitary Sauro Jesús Batista Rivera, aka “El Negro”, stands out for military units of the Los Andes REDI.

It also highlights the arrest of Iván Posso Pedroso, aka “Nandito”, in the Coloncito-Santa Cruz sector of Zulia state, under the coordination of the Prosecutor’s Office with the Bolivarian National Intelligence Service (Sebin).

Both are members of the Los Rastrojos group, which controls a good part of the underground economies of the border with the approval of Colombian authorities.

The Táchira state protector, Freddy Bernal, who heads the security operations in the Andean state, has confirmed that in the last month 19 paramilitaries were killed in clashes with Venezuelan security forces.

For his part, “Nandito” is serving as the main witness in the investigations to determine the connections of the leader of Popular Will, Juan Guaidó, with Colombian paramilitarism, following the photos taken with leaders of the band during his departure from the country towards Cúcuta on February 22 of this year.

His testimony has clarified the collaboration of Duque government officials with Los Rastrojos to make the transfer of Guaidó effective.

ATTACK VENEZUELA, COVER UP THE REAL CULPRITS
The clash, at the beginning of the year, between the views of President Iván Duque and the Trump Administration about the strategy to combat drug cartels, is a turning point in the escalation of violence and coca cultivation in Colombia.

The differences came when Donald Trump criticized Duque’s policies to reduce illicit crops, stating that with his administration more cocaine was arriving in the United States. According to the data handled by the tycoon president, shipments from Colombia increased by 50%.

With an attitude of relative confrontation, Duque responded to the accusations by passing the ball to the American side, referring to the fact that work is shared and that countries with the highest levels of drug use should restrict their trade.

Both nations share blame in the flow of drug trafficking in the hemisphere: the annual report of the UN Office on Drugs and Crime reported a record in 2017 of world cocaine production, where Colombia is responsible for 70%, very much above its Andean competitors, Peru and Bolivia, reaching 171 thousand hectares of coca cultivated.

On the other hand, between 2015 and 2016 there was a 12% increase in new consumers of this type of drug in the population of the United States, according to figures from the Drug Enforcement Administration (DEA). The DEA account also indicated that there were no reductions in regular cocaine users.

Colombia, in response to pressure from the United States, asked the Constitutional Court for authorization to reactivate glyphosate spray, a crop eradication instrument that, rather than ending the cocaine business, causes its displacement to other areas, leaving high environmental damage in the places where the dangerous chemical is sprayed.

As far as cartels are concerned, there is no data of any fundamental blow to criminal organizations that control the production and transportation of cocaine. There is a change in its constitution and profiles of those who dominate it, which were formerly large cartels with national figures such as Pablo Escobar, are now handled in much smaller groups in which foreign presence prevails, especially those Northern cartels (Mexico and the US), and to a lesser extent, those from Brazil.

With everything and the US military assistance, the Duque government has terrible figures in the reduction of cocaine production and the violence that derives from it. One of its biggest failures, the Peace Accords reached in Havana under the mandate of former President Juan Manuel Santos, account for the little interest in rebuilding the country’s social stability.

According to the delegate of the International Committee of the Red Cross in Colombia, Christoph Harnisch, there are no conditions in Colombia to talk about a “post-conflict”, because violence by different groups still proliferates.

From 2017 to 2018 alone, there was a 300% increase in victims of improvised explosive devices. Harnisch and the Red Cross account for at least five conflicts that expose the permanence of armed organizations and the disinterest of the Colombian government to fight against them and reduce drug trafficking.

In this sense, the Duke and the United States seem to be greatly disturbed that the Venezuelan State acts in a contrary direction, affecting a historical business and with as many mourners as consumers.

Featured image: The bellicose rhetoric of Iván Duque against Venezuela has been increasing in recent weeks (Photo: Semana Magazine)