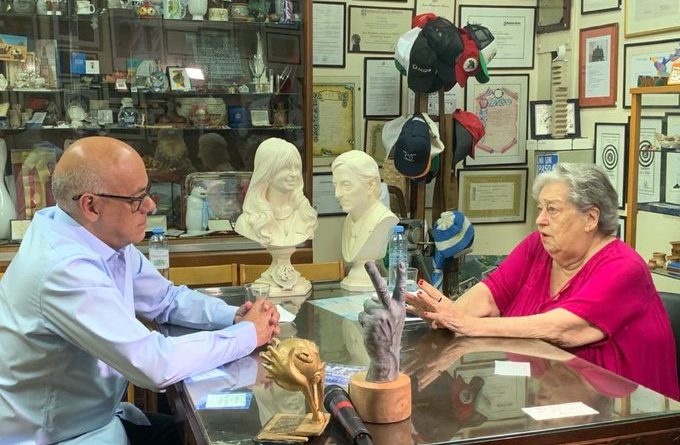 On Wednesday in Buenos Aires, Vice President for Communication, Tourism and Culture of Venezuela, Jorge Rodríguez, held a meeting with the president of the Mothers Association of the Plaza de Mayo, Hebe de Bonafini. “A warm meeting in everyone’s house with Hebe, mother of tenderness and pride. Her memory is the memory of what is human. Her tears are certain that despite the attacks, life asserts itself, ” Rodriguez wrote through a message on Twitter, along with photos of the meeting.

Bonafini, historical leader of the Argentine struggle against the dictatorships of that country, was a great critic of the government of former president Mauricio Macri.

Local media report that the confrontation between the government of Macri and the Association Mothers of the Plaza de Mayo, is due to the alleged participation of the former president’s family in the military dictatorship that ruled in Argentina between 1976 and 1983, which left a total of nearly 30,000 missing and human rights violations.

The Association of Mothers of the Plaza de Mayo, formed in 1977 during the dictatorship of Jorge Rafael Videla, was constituted by the mothers of young people disappeared by said government, and sought to recover them alive, establish who was responsible for the crimes against humanity and promote their prosecution.

Rodriguez arrived in Argentina on Tuesday to participate in the inauguration of Alberto Fernández -representing President Nicolas Maduro- as the new President of the Nation, after winning the general elections of October 27 with 48.34%.