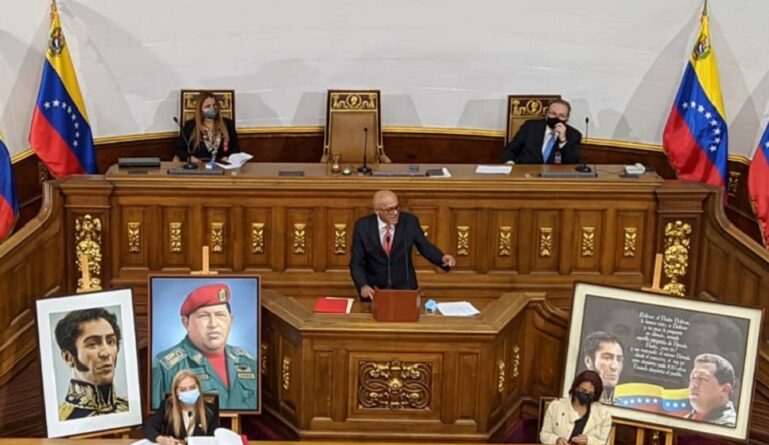 This Tuesday, February 23, the Venezuelan National Assembly (AN) unanimously approved a request that the representative of the European Union in Venezuela, Isabel Brilhante Pedrosa, be declared persona non grata, as well as urging the executive branch to review the conditions under which the EU’s office exists in the country. The question of how Venezuelans are being attacked by these new EU sanctions, and their consequences, should also be raised with the United Nations (UN).

In the opinion of the president of the Venezuelan parliament, Jorge Rodríguez, the new sanctions issued by the European Union are nothing more than “a new aggression, part of the multi-platform plan being carried out from abroad against Venezuela.” He further commented that in his opinion it would be an honor for (Josep) Borrell to sanction al 277 deputies that make up the new National Assembly. “It is really disgusting that there are people who have become addicted to sanctions at the cost of the suffering of the people,” he added.

AN president Rodríguez took stock of the items on the agenda discussed in the ordinary session of the AN this Tuesday, and considered that all the items summed up what he called “the deep, cruel and criminal multi-platform aggression of imperialist actors of the world against Venezuela.”

Discussing the main point relative to the defense of the Essequibo region, president Rodríguez recalled that it was not gratuitous or accidental that “the most criminal and cruel actor has been the administration of Donald Trump. It decided that, in order to break us, it should subject the people of Venezuela to great suffering, and that is why our fight is against Exxon Móbil, which only seeks to steal the wealth of the Venezuelan people.”

He also reminded the AN that Guaidó was required to hand over the Essequibo region if he wanted to have the support “of the ancient English empire.”

Regarding point 2 in the parliamentary agenda, on the discussion of the Agreement to Reject measures adopted by the Government of the Republic of Peru against Venezuelan migrants, with respect to conditions of human mobility at its borders, president Rodríguez highlighted that it had been a point proposed by the parliamentary opposition, and recalled the words of anti-Chavista Julio Borges, who in 2017 had stated that “Venezuelan emigration was a contagious disease … at whatever level, leading to statelessness.”  Rodríguez then pointed out that this was orchestrated by the so-called Lima Group.

And he continued, “Piñera, you took care of the brain drain, but Venezuelans are better doctors than those in Chile, with the tremendous difference that here they were trained for free…. All these displays of racism, showmanship and misogyny against our women were encouraged by the rulers of those countries. They were encouraged by Moreno, a miserable and decadent traitor. Orchestrated as policies of the states of those countries, against a country that gave freedom to most of them… Ecuador, Peru, Colombia, so that they could be free.”

He recalled that Venezuela today welcomes 6 million Colombians and wondered why the UNHCR has never asked how the Government of Venezuela treats these citizens… “How do we welcome them? Like any other Venezuelan, providing them with health, housing, food.”

“I raise both hands to repudiate this attack on our people,” he said upon approval of the agreement against the actions of the government of Peru.

Regarding point 3 on the agenda, relative to the commemoration of the two years of the so-called Battle of the Bridges. He reminded the AN of the concert on the border, as an excuse for Guaidó to work hand-in-hand with the Los Rastrojos paramilitary gang. “They believed that Miguel Bosé was going to overthrow the Bolivarian government. Weapons, money, miguelitos. It was what those trucks [carrying alleged humanitarian aid] dealt with…. They have not stopped their criminal efforts, if they are in Bogotá right now, those same traitors and James Story paid for it, but they have lost.”

The president of the AN once again read the agenda prepared in Bogotá by the right wing, in which he gave an account of the strategy of imperialism to impose itself on the development of the country’s politics.

Already on Monday,  president Rodríguez had reported on the planning on Colombian soil of more actions and aggression against the stability of Venezuela, by the Venezuelan extreme right, the government of Iván Duque and the United States.

“They want the psychopath Leopoldo López to be president of Venezuela, but first they are going to have to go over our dead bodies,” Rodríguez added.

“The only thing that man has been is the mayor of Chacao, not even in the 2012 primaries and he had to support Capriles, even though they hate each other. There is no way that he will become the president of Venezuela and that is why he resorts to violence and that is why he flies crying to the European Union.”