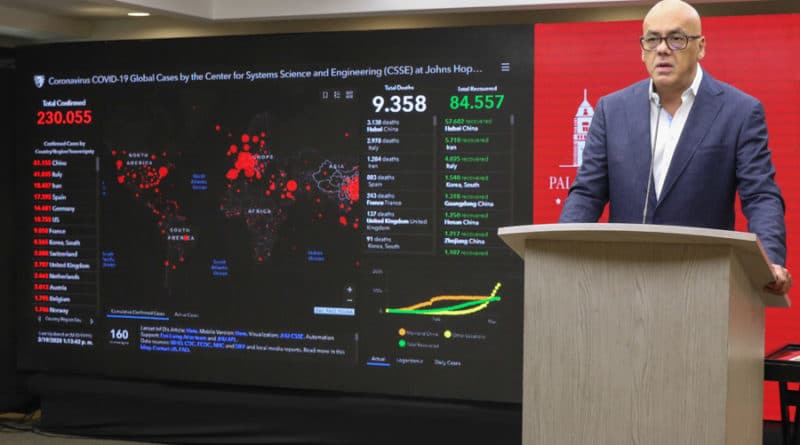 The Minister for Communication and Information, Jorge Rodríguez, reported that six new cases of Covid-19 coronavirus were registered between Wednesday and Thursday afternoon for a total of 42 infected people. “Until yesterday we had 36 cases. With the run from yesterday afternoon until this moment, we have identified six new cases to reach a total number of 42 positive cases. Everyone is receiving attention,” said the minister.

Rodríguez explained that four of the new infections were reported in the Miranda state, related to cases imported from Europe. Another case was identified in Maracaibo, Zulia, related to the spread in Cúcuta.

“There seems to be no disposition of the Colombian national authorities, since Iván Duque prefers to listen to the chambers of retailers, supermarkets and malls asking them to remain open to continue selling, while putting the lives of the people of Colombia at risk,” he said. in statements from the Miraflores Palace.

Likewise, the official pointed out that they have the cooperation of Cuba through the Barrio Adentro network to attend to patients infected with the virus, and stressed that the decree of social and collective quarantine is intended to anticipate measures to prevent the propagation.

The intention is to go two steps ahead of the virus and anticipate to avoid its wide spread, while indicating that compliance with home isolation has been maintained “almost strictly, but there are cases of people who leave without any reason and are exposing themselves,” he said.

“The only thing that works to prevent the pandemic, the only cure, is the collective quarantine. Having decreed a quarantine, what we are doing is anticipating a widespread infection in large proportions,” he said.

He compared it with the results of other countries, such as Spain, where the delay in applying the measures that were applied in Venezuela have resulted in a large number of people dying and becoming infected. He stressed that between March 17 and 18, cases in Spain grew 25 percent. “The most important thing is to flatten the curve to attend to the identified cases, and for that they require the citizens’ contribution, abiding by the quarantine measure, decreed last Monday by the president of the republic, Nicolás Maduro Moros,” Rodríguez said.

The Minister of Communication also showed a fragment of the interview that the program “Salvados” of the Spanish media Telecinco, made by a doctor of that country Jesús Candel, who denounced the very serious problems that exist in Spain with the public health system, and that many people are not taking quarantine seriously.

Screening sessions will begin in Miranda state
He said that, with humanitarian aid from China, as part of a first batch from the binational airlift, an intensive diagnostic process will be carried out next Saturday with an emphasis on the state of Miranda, where more cases of infections have been reported.

He explained that the 4,000 diagnostic kits are already in the country guaranteeing 320,000 tests for citizens with symptoms. “We are going to use the diagnosis that was applied in China and South Korea,” he said.

In addition, “all masks and biosafety suits are fully guaranteed, for the care of infection cases in sentinel medical centers selected all over the country.”

This Thursday at the Maiquetía Airport, La Guaira state, the Vice President of the Republic, Delcy Rodríguez, received 4,015 test kits for the screening of the Covid-19 from China, as well as medicines and other agents necessary for this health contingency.

Millions of doses of Interferon and hydroxychlorofin
On the other hand, Rodríguez pointed out that Venezuela has millions of doses of the Cuban drug Interferón Alfa 2B, to fight the coronavirus in the country, as part of the health agreements signed between Venezuela and Cuba. It also has hidroxiclorofina, antimalarial for mild and moderate treatments. He urged those who try to dismiss the efficacy of Interferon – a drug that acts on cells and prevents the virus from multiplying – to stop being creators of ill-founded opinion matrices just because it is a product of Cuban science. Interferon is an antiviral mechanism of action created by Cuban scientists, to strengthen the immune system of patients, which has reduced the levels of complications in a significant number of those affected by Covid-19, Luis Herrera said last Tuesday, the creator of the drug.

President Nicolás Maduro Moros, announced earlier this week that, after holding a meeting with the entire pharmaceutical industry in the country, agreements and application protocols were established, as well as a guarantee for medicines with the Venezuelan industrial apparatus, added to the agreements with Cuba to supply the necessary Interferon for treatments in the country.

On the other hand, he assured that the case of the nurse Emily Márquez, who in a viralized video on social networks claimed to have symptoms of Covid-19, said that she had suffered poor care and had to pay for the tests requested, when she was visited by the vice minister health at the request of President Nicolás Maduro, she no longer had symptoms. She was offered to be moved from the Guatire hospital to another health center, but she preferred not to. Rodríguez strongly criticized the media and opposition politicians who have taken advantage of the pandemic to try to create opinion trends in their favor, and urged them to join the government in the fight against Covid-19. “What is the need of insisting on miseries, if we can help each other?” he asked.

“President Maduro has said it: let’s not politicize the care of the Covid-19 pandemic. This is not a matter for Chavistas and opponents, it is not a matter for this political group and this one. This is a matter that concerns us all! We all have to shoulder our shoulders, this virus is killed by solidarity, compassion, accompaniment, and discipline. Otherwise, the risk is very high,” he said.

Rodríguez urged the political right to join efforts to contain the pandemic and not to play with the health of the population, as well as to stop creating false information that also generates material costs in complex health circumstances.