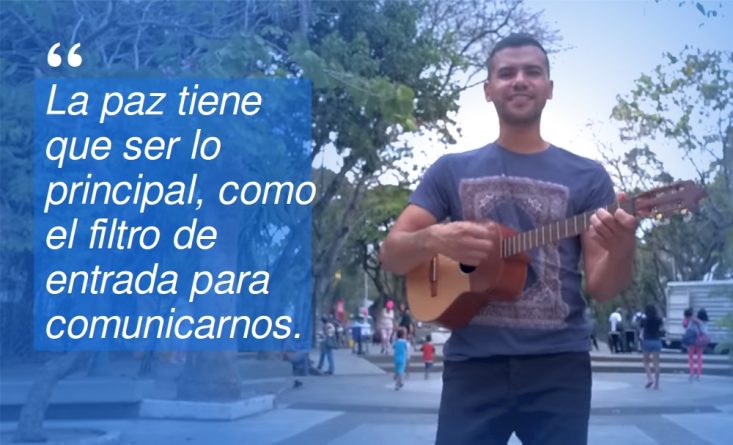 Editorial note: This song among other beautiful songs promoting peace have been broadcast at nauseam in Venezuelan public media (radio and tv) for years but most actively since the beginning of the 2019 US aggression, in contrast to the lies corporate media and the US government have been referring to lately about the “colectivos” or Venezuela’s terrorist links. There is nothing more peaceful than the Bolivarian Revolution but WE KNOW HOW TO DEFEND OURSELVES and we will do it.

In the midst of the attempted coup in progress in Venezuela, with the direct participation of the United States, a group of singer-songwriters decided to write a song dedicated to this issue, with a very clear title: “La Paz Es Ya” (Peace is Now). In this interview we spoke with José Alejandro Delgado, singer-songwriter and poet, and one of the main promoters of the initiative. We talked about the message of the song, the focus on peace, and the role of artists in the current context.

How did this initiative “La Paz Es Ya” and the song that was made come about?

Sharing a little the ideas and reasons that led us to the realization of this effort, we have always had this difficulty to communicate on a large scale about the things that happen. It is a panorama with which we have to learn to live. Because the media, social networks, all that is designed to silence the slightest possibility of change, transformation, awareness, sensitivity.

On January 21, 22, 23, we began to see how, with this new onslaught, the opposition in Venezuela tried to sow in the bosom of our poor neighborhoods the fight between brothers, with groups paid to provoke terror. They did not succeed because our people are very resilient, very mature and patient. Just from those nights came the song, which is titled “La Paz Es Ya.” From there we launched an initiative with the same name, where we started to add Venezuelan artists to make some short videos, to share on social networks, with their message of solidarity and peace for Venezuela. As the song says “It’s not for tomorrow or for later,” it’s peace Now, we need it to reign in our streets.

Despite the climate of instability that they have wanted to sow, here is our people in peace. That does not mean that there are no problems, nor that there are no deficiencies of the State. There are people in the state who may not be facing the threats as they should, sometimes making us crazy with a speech that is dislocated from the actions. The State is something very difficult to change, but the steps we have taken can not be abandoned or pushed back. The opposition that today claims to defend democracy and that is going to save the country are the same ones that gave Chávez an absolutely devastated country with 60% of the population in poverty. Here there are many things to correct, but the change has to come from within the revolution.

What can you tell us about the message of the song?

I have been able to do many tours, in Venezuela and also around the world. And one sees that the class struggle is what is always present and is also what we should pay tribute to. The song, as you see, says “you and I are part of this, because we are the same people”, “you and I who know how to speak to each other, always looking straight ahead”. There (in class struggle) is no separation between chavistas and opposition. There we just look for what also defines our people, which is the class struggle, the recognition of class, in addition to our solidarity, which transcends eventual political differences.

The song has two objectives, then. On the one hand, as I was saying, to symbolically group people in class and on the other hand to also nurture the patriots in a song that reflects emotion, sensitivity, and high artistic quality. The idea is that our land, our homeland / motherland, must be safeguarded, taking care of the instruments for peace; since we have advanced to settle our differences through the vote instead of killing each other.

In official speeches or statements we usually hear words like “aggression,” “imperialism,” “sovereignty,” but in this case the message is totally focused on peace. Why this choice?

Why peace? Because in peace is that we can discuss everything. In peace, we can listen to each other, put ourselves in each other’s shoes. Everyone has his vision and, if we do not have a plural vision, how can we build a collective society? But we will not have the chance to see one side or the other if we are at war. War leads us to the most primitive, to “every man for himself”.

It is not the scenario we want, that is why we do not see peace as an accessory thing, but as something that has to be at the center of construction. Peace has to be the main thing, as the entrance filter to communication, to go out to the street to talk to whomever. In this context we have to exhaust ourselves in avoiding anything that could lead to human losses, I believe that this is the greatest effort we have to make.

When we talk about peace, we also talk about the instruments of peace, which are the elections. Here Chavismo has won almost all elections, with observation of international organizations. The tool works well and has been improved and perfected. In that we can not turn back, go back to something more primitive. So why is the possibility on the table? Because a sector of spoiled who were always the owners of the country has not had the maturity to understand that our people changed. The political, democratic culture of our people has been changing, and they can not the reach the level of that people. They can not because their project is to renounce self-determination, devastate the country once again, make a few more and more rich on the shoulders of the majority.

In that line, there is a phrase in the song that draws attention, where it is said “because we are no longer invisible ghosts, peace is now.” What is its meaning?

This phrase is by Ernesto Navarro and part of a collective poem also called “La Paz Es Ya.” From there the chorus for the song was taken. I believe that the phrase reflects that feeling of what we have been doing throughout these 20 years of contemporary history. As in spite of the invisibility that the establishment, be it political or media, tries to impose, this people that continues to be invisible in certain spaces, continues surprising everyone with their decisions.

That is, a people subjected to this aggression and suffering from this crisis would expect a rebellion against their rulers. But reality is far from that, and recent elections, which are the most tangible way to measure the intention of a people, confirm it.

I believe that there is a phenomenon where the left, full of wise men who do not leave the university corridors, has helped to confuse reality about Venezuela. On the other hand, I think that the same academic left has not wanted to study in depth what Chavismo really is.

For example, nobody works in studying the mothers of the neighborhood program (madres del barrio), those women who have been beaten by machismo, who have been oppressed, who have children, and who are still the spokespersons of CLAP, which has been a tool to organize the people in the contingencies as happened right now with water and electricity. The people in the CLAP are mainly women, revolutionaries. Many have not read Marx, they do not have to do it either. They are being that, they are writing history, they are the written poem about everyday life.

Thus the invisibles of history are making themselves felt. Equivalent to what we call anonymous author in music, the anonymous author that is the feeling of our people, which has made the best songs we have, with the indelible hand and ink of the voices of the human beings that make them theirs and they are sharing generation after generation. What do you think is the role of artists and creators in the current scenario?

All the comrades who have been participating in this initiative “La Paz Es Ya” are brothers of trench and fight, song and joy, for many years. We have always been clear about the usefulness of music, the usefulness of art, in times of crisis. We have to be unselfishly at the service of our people, our people, our communities, our families. For that we have been trained, in that language that reaches sensitivity, to consciousness, which can constitute an opportune hug or shout.

That’s why we’ve all been there collaborating, even in the critical moments of the blackout we decided to go to hospitals, to communities, making anti-imperialist stands in different spaces. We could see that people are active, that there are many people who are conscious, and we try to fill those silences, or those anxieties that are generated in times of crisis, of the contents that we believe should be discussed and should not be abandoned .

On the one hand we ask ourselves and we debate, why is there a blackout, who perpetrates this type of actions, how much has it cost us, how much can it cost us in human lives? At the same time we try to provide spaces of quality, with several wonderful people, experienced in the language of music and its impact on society. We are all part of this people, and we have been active raising our flag for peace and defending the land gained in this symbolic battle.

I think this is the role of artists. We drink from our people all the imaginary, and we have the possibility to abstract ourselves, that many people who are working or in complex situations of life can not do. Then the products of that abstraction, like songs or poems, must be returned to our people, and that is why we make music as we do it, we share it in the way we share it.

To finish, can you tell us a bit about Ciudad Canción?

Ciudad Canción is a project that was born a year and a half ago, we have already done 15 editions here in Caracas. Each edition has had a theme, with which we invite poets and musicians to create a repertoire together, create songs together. Then we are renewing the song book of our city. Artists have a limited time to create, with which they have to organize very well the ideas, the feelings, make a very important synthesis work in these moments. By doing that, you are working by decanting your spirit as a creator and, by showing it, the same happens to the people who listen.

It has been a project that has always had latent the idea of ​​chaos, of the crisis, that as the situation becomes chiquitica (very problematic), we seek tranquility to obtain creative proposals that are at the level of what we need. We do that from the point of view of the song, but our people do it from the point of view of agriculture, for example. Many things that will have to resurface and that will have to change in the framework of this crisis, which is an opportunity for the necessary transformations.