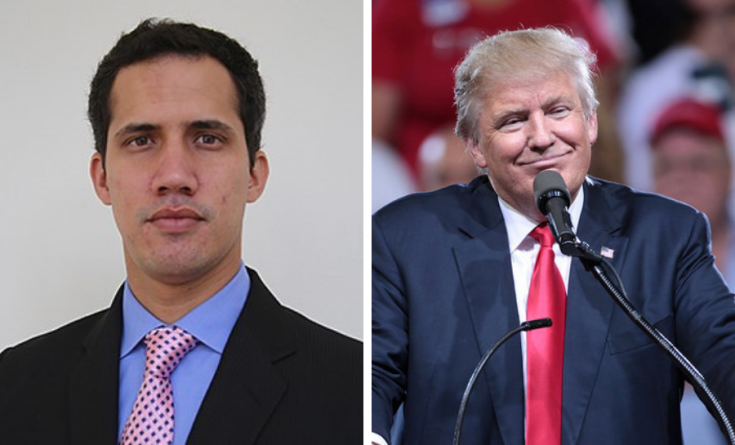 Caracas (GPA) – The imperial powers have found their new opposition point man in Venezuela; President of the National Assembly and President of the country according to some nations and organizations.

Now that the latest term of Venezuelan President Nicolas Maduro has started and the western powers and their proxies refuse to recognize the Bolivarian government, the imperial states are in a mad dash to find a new face for the Venezuelan opposition. Now it seems that man has been found and the race is on, with state after state anointing the 35-year-old engineer Juan Guaidó.

Guaidó, now being called the “interim President” by everyone from Jair Bolsonaro, the Organization of American States (OAS), to Donald Trump and Justin Trudeau is the current president of the Venezuelan National Assembly. However, according to the states looking for a regime change in Venezuela, Guaidó isn’t just head of the parliament but also the rightful leader of Venezuela.

Guaidó has become a fast-rising star in the political opposition which has led the anti-Maduro National Assembly an opportunity to make political hay and possibly get outside assistance. The opposition acted on this chain of events Tuesday when the National Assembly declared Guaidó the interim President and said he is in charge of organizing new “legitimate” elections.

Putting a new face to the Venezuelan opposition then immediately allowed for all sorts of anti-Maduro actors use Guaidó as their man to rally around.

So now that there is a new imperial point-man inside Venezuela the real question is, what happens next?

There are two likely outcomes to the rise of Guaidó, one of which is contingent on him succeeding and the other which would be another complete failure for the imperialists.

Guaidó launches his campaign today following several days or organizing protesters at rallies in Caracas. The protests have already started to turn violent as of this writing with at least four dead and the opposition calling for the military to “rise up” against the Bolivarian government.

This is all backed by countries like Canada, European nations and sham imperial bodies like the Organization of American States (OAS), which also encourage regime change and now want Guaidó as the man to lead it. Surprisingly, US President Donald Trump was one of the few holdouts who had yet to recognize Guaidó as President but finally caved today.

Guaidó himself has also made promises that should the imperialists allow him to become president and his government to take over they would be welcomed back into the international community. The faux president has also made promises that under his leadership Venezuela would “easily” receive debt relief and loans. At the same time they’re doing this, the opposition also continues to push through measures to freeze the state’s assets, punishing average Venezuelans more in order to entice into turning on Maduro.

This kind of financial manipulation by the opposition coupled with the protests starting to say are essentially an insurrection against a state sponsored by the imperial powers. While protests aren’t necessarily “warfare,” the calls on the military to revolt also show that the opposition doesn’t just want to use civil disobedience but they’d be fine with a violent civil war.

Civil war may be one possible outcome of this latest anti-Maduro frenzy but there is also the possibility that these protests – like those in 2017 – fail. If Guaidó is looking to be president he obviously can’t have this happen or he’ll likely end up like Leopoldo Lopez, Washington’s last golden boy and fellow party member with the “interim President.”

Much like Guaidó, Lopez led protests that became violent and saw protesters causing damage meant to cripple Venezuelan infrastructure for extended periods of time. The problem for López is his little “uprising” failed, he was held accountable for encouraging the violence, and is now on house arrest.

If Guaidó and the empire fail again the “interim President” can likely look forward to the same fate.