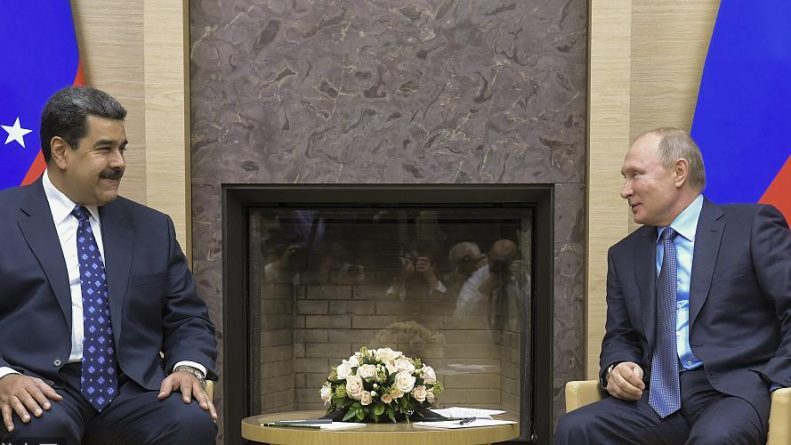 This move can be regarded as a response to the Donald Trump administration’s coup threats to the Venezuelan government. Venezuela, a country struggling through difficult moments, has become a new arena for the West-Russia strategic competition.

Venezuelan President Nicolás Maduro has proved to be more resilient than what the West thought.

Although the Trump administration exhausted all kinds of tricks from economic sanctions to political sabotages to threats of military intervention, and even attempted to drive a wedge between Maduro and his generals, Venezuelans are well aware that the U.S. is just bluffing.

It is hard to believe that a president trying to withdraw troops from the quagmire of Syria and Afghanistan will allow Latin America, the “backyard” of the United States, to become another Fragile Crescent.

The military personnel sent by Russia will help Venezuela to maintain its military assets, assess its current security situation and military readiness, and even prepare for future operations. For many observers, the Kremlin’s decisive move has frustrated the White House that lacks enough strategic will.

Juan Guaidó, the self-proclaimed opposition leader, has missed his best opportunity. His anti-government campaign received nothing except for “moral” support. Moreover, at the end of February, his constitutional basis legitimating himself as “interim president” – though not sufficient – has expired.

Stabilizing domestic political order is a priority for Venezuela at the current stage. Reforms can only yield good results in a healthy political order.

A friend of mine doing businesses in Venezuela told me earlier that local people hold a realist view about the current political turmoil. Although many people are dissatisfied with the status quo, more of them do not trust the West-endorsed opposition leader.

They are concerned that the Western-educated young politician lacks enough problem-solving expertise and political experiences, a prerequisite to bringing Venezuela stability and prosperity.

Venezuelans believe that while reforms must be taken to improve the economic situation, no reform can be done overnight. They do not accept reforms that are carried out at the expense of stability and order. The tragedy that occurred in Syria has really taught them a lesson.

What Venezuela needs is genuine humanitarian assistance without any additional political conditions. China has just assisted the Venezuelan government with 65 tons of urgently needed medicine and medical supplies.

History has repeatedly shown that foreign interventions will only complicate the situation and will not help solve problems. China has no intention to interfere with Venezuela’s domestic affairs and its humanitarian supplies should not be regarded as a Trojan horse.

In the long run, Venezuela needs a new development approach. Since the first oil field Zumaque was put into production in 1914, the oil industry has become the lifeblood of Venezuela. The country’s historical dependence on the global oil market has thwarted it from becoming a healthy and autonomous economy.

Only by re-industrialization and establishing an independent diversified economic system can Venezuela escape the current trap and embrace a prosperous future.

Kang Jie is an assistant research fellow at the China Institute of International Studies.