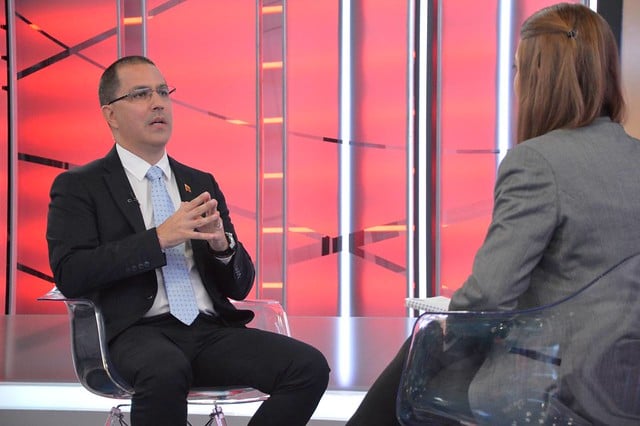 In an interview for the program América Latina en disputa [Latin America in dispute], broadcast by the multistate Telesur, Venezuelan Foreign Affairs Minister Jorge Arreaza reiterated that the Bolivarian government’s commitment in the face of destabilizing events promoted by imperialism in the region, like the assassination of the president of Haiti and the attempts to destabilize Cuba, “is always for integration, for peace, for dialogue.”

He indicated that, as proof of this, on July 24, in tribute to the birth of Liberator Simón Bolívar, a meeting of ministers of the Community of Latin American and Caribbean States (CELAC) will be held in Mexico, and on September 18, on the occasion of the bicentennial of Mexico’s independence, this country will host a meeting of the heads of government and state of CELAC. “We only believe in peace, in dialogue and in the union of our peoples,” he insisted.

During the interview conducted by the president of Telesur, Patricia Villegas Marín, the Venezuelan diplomat specified that the real bet of Venezuela is on the people, who will always find ways to build democracy.

”That pendulum that has been swinging this century between the left and the right will inevitably stay on the left, because it is the characteristic of the peoples,” he asserted.

The minister considered that the game on the geopolitical chessboard of the region is being won by the peoples of the region, who “are on the offensive and are going to reconquer and conquer new spaces, we have no doubt. You need to have strategic patience, be very alert, because what happened in Haiti can happen in any of our countries, not only against presidents but against leaders of the left”, he added.

He predicted that between now and 2030 there will be many changes in the world and in Latin America: new spaces will be won by the people and added to those won in the first decade of this century, and it will be a definitive process.

Historical dispute
Foreign Affairs Minister Arreaza contextualized that the current situation in the region is a 200-years old historical dispute over a territory, natural resources, a geographical position in the world and that the imperial onslaught of recent years responds to the reversal of the coup in Bolivia, the resistance of Venezuela, the healthy and peaceful generational transition that took place in Cuba with the change of Head of State.

Arreaza defined that imperialism goes far beyond the White House and the military-industrial complex of the United States; It is a network of financial, military and technological corporations that do not respect nationality and are represented in some governments; the most important, is that of the United States and Colombia in South America.

In this regard, he pointed out that Colombia has been seen as the Israel of Latin America for decades. “Unfortunately, it is a pain, a wound, especially for the Bolivarian peoples, that Colombia is taken as the enclave, the main platform of imperialism. There, the Gideon and all the others operation against Venezuela were prepared.”

Regarding the paramilitary gang that recently hit a Caracas neighborhood, the minister explained that it was financed, with weapons and ammunition, with a corridor with origin in Colombia, with links to drug trafficking. However, “our intelligence managed to infiltrate and in a matter of hours we were able to regain control with the least amount of casualties.”

During the interview, the Arreaza also confirmed that the Venezuelan opposition politician Emilio Graterón is taking refuge in the Chilean Embassy in the country, according to a statement issued by the Chilean diplomatic mission in Venezuela.