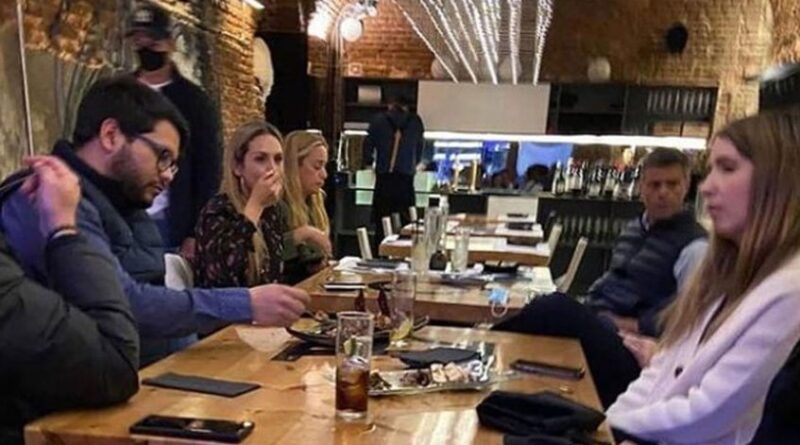 Regarding the bloody repression in Colombia against peaceful demonstrators, there are several aspects that are astonishing. In addition to the vicious will of its police officers to impose order through questionable means, there is an occurrence that surpasses them: Leopoldo López’s condemnation of violence—but not the violence of Colombia’s repressive forces.

The Venezuelan, who is known for his marked vocation for violence, released a statement whose reading produces enormous cognitive dissonance.

These are five paragraphs of an unknown version of Leopoldo López, at least to Venezuelans. The politician, based in Spain and living a life of luxury, wrote about his alleged deep concern for the way in which the protests have led to extreme violence.

From the very first paragraph, Leopoldo López shows an unrecognizable version of himself, a politician that surely had to re-invent himself in order to write this statement.

According to the extremist politician with several crimes on his resume that do not reflect a particular concern for democracy, he writes that for three decades he has shown that he believes in protest as a democratic right of individuals and communities.

The statement could only be believed by a non-Venezuelan
Undoubtedly it is a statement for the passive consumption of foreign audiences, since in Venezuela it is known that Lopez’s “democratic vocation” includes the prolonged saga of violence of the coup d’état against Hugo Chavez in 2002, and violent protests in 2014 and 2017 known as guarimbas, which he laid claim to as an epic of a heroic resistance against a “dictatorship” while his supporters burned people alive just for looking like “Chavistas,” and set ablaze a daycare with children inside.

As if accusing himself, he wrote that “out-of-control violence, with its aftermath of death and destruction, strips the protest of legitimacy and pushes beyond the limits of coexistence.”

This phrase generated astonishment for many Venezuelans, since this is the very same person who in 2014 said that opposition violence would not stop until the overthrow of Maduro—not a very democratic approach for such an apparently civilized politician.

Additionally, López acknowledged that democracy imposes limits on everyone, without exception, a concept that in the case of Venezuela didn’t seem to apply to him, as he supported coup attempts, guarimbas, and mercenary invasions.

And to crown a document that is the manifest expression of an incoherent politician, he elevated the unpopular Duque to a level where his presidency represents “a privilege” for his country, since allegedly Duque is a statesman willing to listen to the people—despite the fact that he ordered a crackdown to quell demonstrations on the streets of Colombia that included an army helicopter shooting at his own people and dozens of deaths. One of the basic demands of the National Strike Committee, which has not been met, was for the government to engage in “dialogue.”

This is the thug who called for terrorism against Venezuelan gov buildings & led murderous guarimbas https://t.co/8KW1Xcbgpr

Anya Parampil, renowned US journalist from the Grayzone, posted the following on her Twitter account: “Venezuelan opposition leader @leopoldolopez denounces “extreme violence” of Colombian protestors— as unarmed demonstrators are hunted and gunned down by the US-backed police state. This is the thug who called for terrorism against Venezuelan gov[ernment] buildings and led murderous guarimbas.”

Conservative solidarity
Leocenis García, another right-wing Venezuelan politician, also joined the extreme-right coalition in defense of the Colombian repression. With a message on Twitter, he condemned the violence and claimed that “it is absolutely naive to believe that the demonstrations in Colombia are spontaneous.”

The political leader remarked that it is “the left and former FARC mercenaries who are trying to unbalance democracy,” repeating the narrative that extreme-right personalities and the “free press” have spread in recent days regarding the terrible events in Colombia. In reality, at this point the demonstrations have been perceived across the entire world, by countless organizations and governments, as millions of mostly peaceful Colombians demanding a better government and being brutally and bloodily repressed by Colombian security forces.

Featured image: Venezuelan fugitive from justice Leopoldo López can be seen in this photo in the background just in front of his wife, Lilian Tintori, in the expensive La Carlota restaurant, where they were spotted last weekend. File photo: courtesy of RedRadioVE.