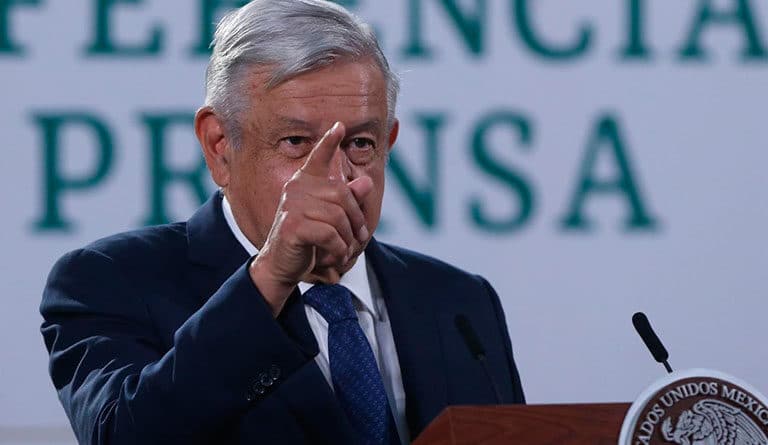 The Mexican government issued a complaint to the United States in regard to US financing of the Mexican NGOs Mexicans Against Corruption and Impunity (MCCI) and Article 19. Andrés Manuel López Obrador, president of Mexico, called these NGOs “opponents and coup plotters.”

President Obrador confirmed this Friday, May 7, in his daily morning 7am press conference, ​​just a few hours before his virtual meeting with US Vice President Kamala Harris, that the Ministry of Foreign Affairs sent the diplomatic note on Thursday through the United States Embassy in Mexico.

Obrador declared that this was “an act of interventionism that violates our sovereignty.” When asked by a reporter from the right-wing newspaper Reforma why he referred to it as “interventionist,” Obrador replied that “it is because a foreign government cannot give money to political groups in Mexico; you cannot receive money from another country for political purposes, it is treason… our constitution forbids this… it is interference; it is interventionism, and it is promoting a coup.”

The diplomatic note was issued after a report by the news magazine Contralínea was divulged during Obrador’s usual morning press conference on Thursday. The report documented how the United States government had donated 25.7 million Mexican pesos ($1.28 million) to MCCI from 2018 to 2020. Apart from this direct donation, MCCI also received money from the United States Agency for Development (USAID) and the National Endowment for Democracy (NED), both well-known CIA cutouts.

MCCI, an NGO that allegedly investigates corruption cases in Mexico, was founded by businessman Claudio X. González, son of the president of Kimberly-Clark Mexico, Claudio X. González Laporte. González also promoted the creation of the newly formed Yes for Mexico campaign (Sí por México, in Spanish), a political movement which groups together the right-wing opposition parties, PAN-PRI-PRD, who previously had governed in Mexico.

During his press briefing, Obrador exhibited the invoices and tax returns which showed that MCCI had received 50 million pesos ($2.5 million) from USAID, from 2018 to date; and in addition, 29.3 million pesos ($1.46 million) were given to Article 19.

López Obrador described the financing of opposition groups by the United States as a “bad practice,” but ruled out that the US was promoting a coup, despite referring to the aforementioned associations as “coup plotters.” He clarified that the diplomatic note was sent specifically to request information about the resources.

“Picture this, money grants from the United States Embassy to pay for propaganda against us,” said the president. “They now have to transparently clarify to whom have they given money and where else have they destined funding.”

Despite the scandal, López Obrador reaffirmed that “there is a very good relationship” with the United States government, both with current President Joe Biden and with former President Donald Trump.

President Obrador ruled out addressing the complaint with Vice President Harris on Friday, with whom he met virtually to address the issue of migration in Central America. There will also be a face-to-face meeting between the two in Mexico, scheduled for June 8 this year.

The president stated that he would not bring the issue up because it would “tense the meeting and because it is another topic; a completely different agenda. [I am only bringing this up now] because it was mentioned here yesterday and it has caught our attention. It has been twice now that this magazine [Contralínea] raised things that I was not aware of, it is a very good magazine,” he added.

Last year, on August 30, 2020, Obrador had already revealed foreign financial funding, when it was disclosed that many environmentalist NGOs lobbying against Mexico’s Mayan Train project (Tren Maya), including MCCI, had received money from the Rockefeller, Ford and Kellogg Foundations, as well as from NED.

Although López Obrador downplayed the foreign funding scandal, it is necessary to remember that this was not the first time that the US government intervened in Mexico’s internal politics. The most notable example was the coup that ousted and led to the assassination of President Francisco I. Madero, in a plot orchestrated in conjunction with the corporate press, the private sector, the army and the US embassy, in 1913.