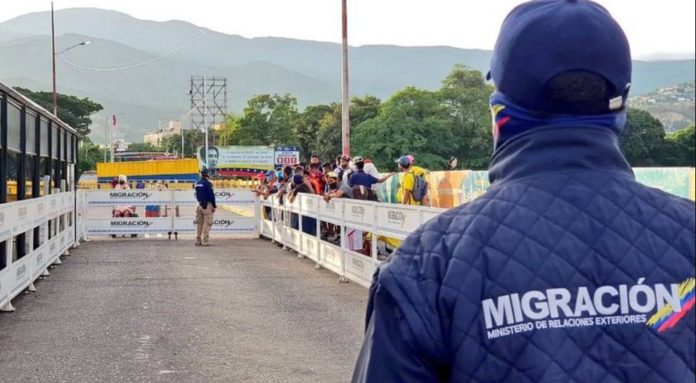 Venezuelan President Nicolás Maduro warned that Colombia wants to create a “show” at the border to divert attention from the internal drama that the neighboring country is experiencing, amid more that three weeks of strikes and demonstrations met by brutal and bloody repression.

He stressed that the Duque government seeks to open the border unilaterally, which would signify bad intentions on the part of Bogotá.

The Colombian authorities announced that they estimate the border opening to occur on June 1, to which the Venezuelan president replied this Sunday that: “Nothing unilateral is going to work. If the stubborn and reactionary government of Colombia does not coordinate with the legitimate Bolivarian government of Venezuela, nothing on the border will function.”

Maduro denounced Colombia’s decision, stating that, in addition to diverting attention to Venezuela, the Colombian administration seeks to affect our country by allowing the spread of dangerous variants of the pandemic that is currently spiking in the bordering country. Colombia is among the countries in South America with the worst results in the handling of the COVID-19 pandemic, while Venezuela is among the nations with the most successful and responsible approach, resulting in relatively lower figures in terms of cases and deaths reported.

“I want to alert the people of Táchira, Zulia, and Apure: we have information that the variants of India, South Africa, and California are spreading very intensely in Colombia, and in the North of Santander these very dangerous variants have already been spotted,” said Maduro.

Regarding the pandemic in Venezuela, he assured that: “We have the second wave under control.”

However, the relatively secure healthcare situation could be in jeopardy if Colombia acts unilaterally on the border.

Hoping to make a media splash
“They only want to use the opening of the border to disturb the border, and to send us those variants that are more dangerous than the Brazilian one—to send them to Venezuela to contaminate Táchira and the rest of the country,” commented Maduro.

To anticipate this likely scenario, the Head of State requested that Vice President Delcy Rodríguez and Minister of the Interior, Justice and Peace, Carmen Meléndez create “a plan to protect the border of Venezuela, especially that of Táchira state.”

The president mentioned that the other intention behind the announcement of the unilateral opening of the border would be to “create a media splash with the theme of Venezuelan migrants looking for money, looking for someone unwary in the world to take hundreds of dollars in their name.”

According to this, the border opening would constitute a maneuver to raise the funds that Duque could not collect with the proposed tax reform, subsequently shelved after its rejection by the national strike and demonstrations. In 2020 alone, for example, USAID provided Colombia with over $200 million for “Venezuelans, Colombian returnees, and host communities in Colombia,” according to USAID statements. There is scant evidence of any of this “aid” reaching needy Venezuelans in Colombia.

To close the subject, the president remarked that “we can do things correctly, with controls, but by force (unilaterally), we cannot do anything. If it is agreed upon, and it is favorable for the people near the border, let’s do it by consensus, for the good, with biosecurity measures. With goodwill, everything is possible.”

The Colombian government, in its submission to US interests aimed at ousting President Maduro, has broken diplomatic relations with Venezuela and had rejected any sort of communication, even while Venezuelan authorities have made numerous attempts to open channels of communication and coordination for the management of a very complicated frontier.