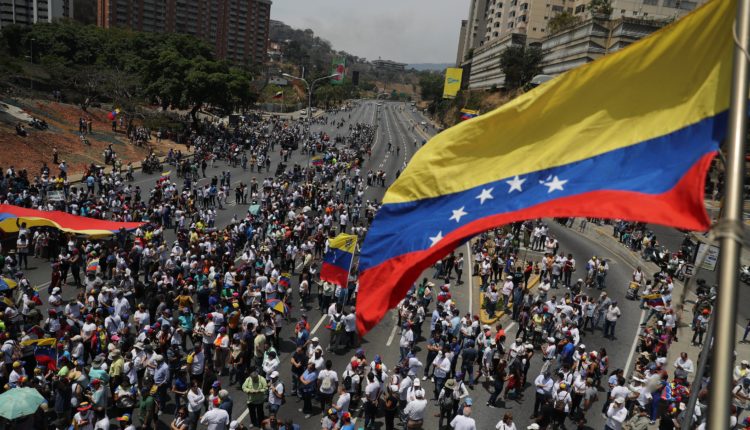 Hundreds of Venezuelans take to the streets of Caracas (Venezuela) on Wednesday, a day after the ephemeral military uprising led by the head of Parliament, Juan Guaidó.

At this point, to expect the Spanish media to report with rigor what is happening in Venezuela and to call a coup d’état the attempt that a person, who is not recognized as president by the current government or by the United Nations, will try to take power with military help is mission impossible. However, we should not stop analyzing the falsehoods and omissions of coverage and information about what happened on April 30 in Caracas.

They began by saying that Juan Guaidó was in a military base in the capital, La Carlota, and they presented him surrounded by soldiers. In this way it appeared that he had taken control of a part of the military structure and that, behind him, there was a sector of the army. It was false, they were on a highway, called Francisco Fajardo, near an air base.They said that Leopoldo López had been released in compliance with the orders of “President” Juan Guaidó ( La Razón ), “Juan Guaidó signed his pardon and his custodians of Sebin and Dgcim (military counterintelligence) complied with the release order” ( ABC ). It came out because some soldiers did not obey the chain of command and in their uprising they released an inmate who is under house arrest, Guaidó has no authority neither in the Sebin (Bolivarian National Intelligence Service) nor in Dgcim (General Directorate of Military Counterintelligence) neither in the Venezuelan military or police structure, he can not order anything.

The operation was presented as “accompanied by the Armed Forces” ( ABC ). Even the one sent to Caracas by Antena3 affirms before the question of the presenter, that it is not known how many soldiers support Maduro and how many Guaidó, only that the military leadership supports the first one. In that way they look like a divided army. Well, in the end the “army” that supported Guaidó were 25 private soldiers who ended up refugees in the Brazilian embassy.

In addition, the military were deceived to support the coup, as declared before the cameras of Telesur and other images collected in the networks. They were told first that they were going to collect some decorations and then to a prison for a transfer of prisoners, but they took them to block an avenue and stage a coup d’état. These statements, with available images, were not collected in the Spanish media.

A few hundred people surrounding Guaidó and Leopoldo López and they call it a multitude ( El País ). Sometimes we discover what their journalistic structure is to inform rigorously: someone who lives in front of the presidential palace tells them that they do not see anything. Seldom does a photograph say the opposite of the reality of the owner. “The regime fights for its survival with harsh repression in the streets,” says La Razón on its cover. The balance of wounded in the two coup days of Caracas was 27 according to the health services on the first day and 50 the second; as far as detainees, there were less than ten in the capital, according to NGOs. There were more detained by the Argentine police in Buenos Aires for protesting against the coup in Venezuela. The next day, in Paris on the occasion of May 1, there were 40 injured and 300 arrested. The action of the State in France was almost more aggressive to quell a Worker’s Day demonstration than that of Venezuela to defuse a popular “uprising” to overthrow the government.

They silence information that marries badly with a dictatorial government. For example, the call of the president of the National Constituent Assembly, Diosdado Cabello, for Venezuelans to go to the Presidential Palace. In the popular uprisings against dictatorships, the rulers do not take people to the street, they take the military; people go to the presidential palaces to ask for the resignation of the rulers, not to support them. Nor did they broadcast the images of that response with demonstrators supporting Maduro in front of the palace.

Venezuelan television also broadcasted coverage of its correspondent from inside a military base where cameras recorded opponents besieging the barracks and throwing stones, flares and even shots, an officer and some soldiers were injured. Nothing of this deserved the interest of Spanish televisions in spite of the fact that the images were available and they were spectacular.

The Venezuelan Minister of Culture, Ernesto Villegas, broadcast images of opponents and coup soldiers with semiautomatic silenced weapons that are not used by the Venezuelan army nor can be obtained in the country.

The Spanish media did not pick up an image of any march or demonstration in favor of the government even though there were some. Nor of the massive demonstration on May 1 that was called against foreign interference and in support of the Venezuelan government.