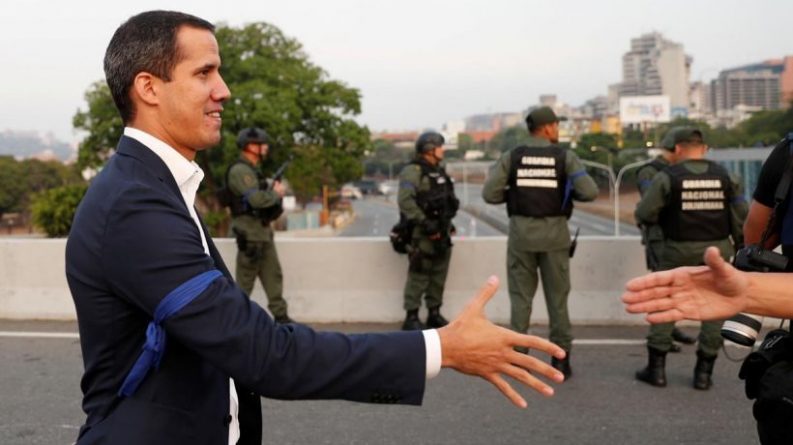 Guaidó called on Wednesday for some new violent protests in the city of Caracas.

A day later, the failed coup of Juan Guaidó and Leopoldo López breathed defeat in the international media, which after the expectation returned to the same point they left: the lack of viability of the coup plans in Venezuela.

According to the Argentine newspaper Clarín: “About 10 hours after the announcement of Juan Guaidó about the “liberation” of the opposition leader Leopoldo López, little has changed in the Venezuela of Nicolás Maduro: neither battalions full of jaded soldiers joined the popular rebellion, nor did the streets fill with opponents willing to reach the Miraflores Palace to end what the head of Parliament and “president in charge” calls “the usurpation.” And, much less, the Chavista regime has not fallen.

In a note signed by Pablo Biffi with the title Conflict in Venezuela: the blow that was not and the fortress of Maduro, the newspaper also affirms that no middle or top high command was in favor of the call to overthrow Maduro. “The military backing of Maduro is key, but not the only leg that allows him to stay in power. It is undeniable that even in spite of the collapse of the economy that hits both Chavistas and anti-Chavistas alike, the regime enjoys respectable support in sectors of society that live on the dream of the Bolivarian Revolution inaugurated 20 years ago”, remarks Biffi in a search to find the reasons why the coup plans do not advance in the country.

In this same tone, the financial medium Axios describes the lament of the investors allegedly involved in Venezuela. “Despite calls for support from President Trump and politicians around the world, they are beginning to lose faith in the opposition’s ability to overthrow Maduro given the apparent increase in Russia’s support,” Axios sums up the feeling of those who bet that Maduro falls to invest according to them (a euphemism to refer to the intention of auctioning Venezuelan resources).

According to the investors, in that sense, the opposition’s efforts have fallen short due to the continued support that Maduro has from Russia, China and Cuba. This is why they are stuck in pursuit of a regime change that leads to the elimination of US sanctions and that allow them to “invest in the country”.

While Bloomberg, one of the media that gives exclusives about coups in Venezuela, says in an editorial note that “with Maduro still in control of the streets, highways, radio waves and the Internet, the immediate future for the momentum of Guaidó is uncertain.” But that projection of failure does not stop there because the media points out that the issue is “just as problematic for the Trump government, who after sanctioning Venezuela and supporting Guaidó, expected the opposition leader to finally take power”.

In the same way, Bloomberg argues that there is “the risk that Venezuelans will find themselves as pawns in a larger geopolitical game” after high-profile opponents such as Leopoldo López sought refuge in the Spanish embassy in Caracas. It’s so obvious that the original strategy of the White House is to put Venezuelans in the middle, again and again, to assume the task of destroying their own country in a violent way. The pressures in that sense range from sanctions to open threats of military intervention.