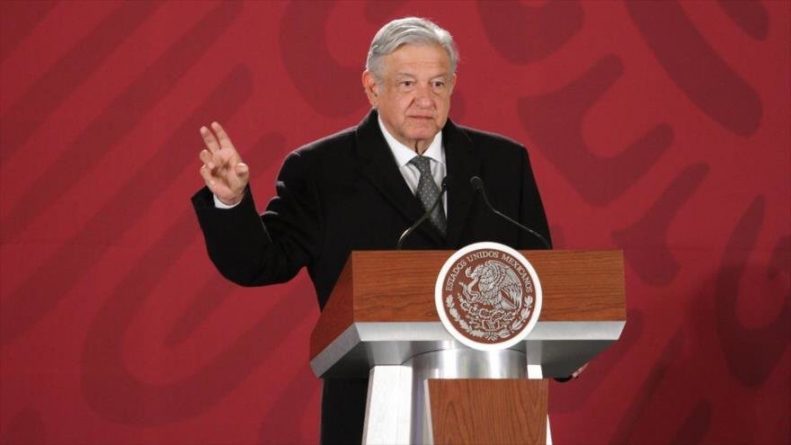 The President of Mexico rejects the request of the Venezuelan opposition for the Aztec country to join those who support the coup in Venezuela.

“On Venezuela, our position is the same, it is what our Constitution establishes, we are not going to move from there,” said the Mexican president, Andrés Manuel López Obrador.

Mexico, he said, has to respect the “principles of non-intervention, self-determination of peoples, peaceful settlement of disputes.”

López Obrador’s statements come as Juan Guaidó, head of the National Assembly (AN) of Venezuela, an opposition majority and declared in contempt in 2016, has called on the Mexican government to “join the voices that ask a change of democracy and freedom in Venezuela” during an interview published Monday by the Mexican newspaper El Universal.

In the opinion of the Mexican head of state, by not interfering in the affairs of other countries, it will be possible to “strengthen sovereignty” and that “there is no foreign government that wants to meddle in the internal affairs of Mexico.”

After the self-proclamation of Guaidó as “interim president of Venezuela”, supported by the United States and several of its regional allies on January 23, Mexico soon supported in a statement to the Venezuelan leader, Nicolás Maduro, who won the presidential elections last May.

In the letter, the Administration of López Obrador assured that Mexico will not participate in the non recognition of the government of a country with which it maintains diplomatic relations and highlighted its policy of non-interference in other States. In addition, the Aztec country did not accompany the Lima Group in not recognizing the new term of Maduro.

Anti-imperialist countries such as Bolivia, Cuba, Mexico, Russia, Iran, China and Syria have expressed their support for Venezuela in the face of the coup efforts to overthrow the legitimate Government of Maduro, efforts that, according to Caracas, are directed by the United States.