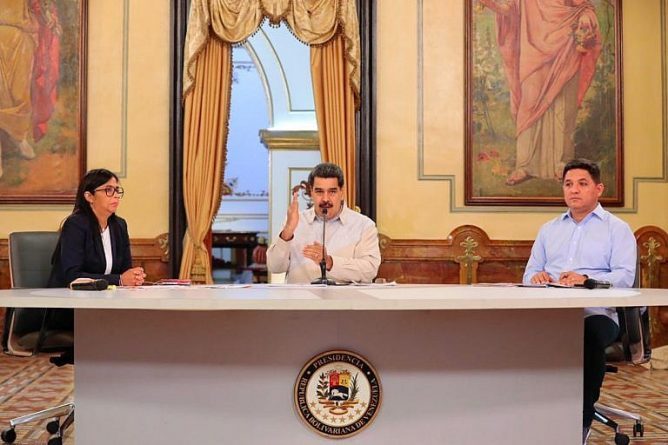 Venezuelan President Nicolás Maduro denounced Washington on Tuesday for stealing, through an illegal debt, the company Citgo, a subsidiary in the United States of the state-owned company Petróleos de Venezuela SA (PDVSA). “I take the opportunity to denounce the theft of Citgo through a totally illegal debt, and this is going to be proved when we win the lawsuits in the United States and return the company Citgo to the property of the Venezuelan State as it should be. It’s going to be shown! “Maduro said on radio and television.

During a speech offered by the Miraflores Palace (government headquarters), in the company of Vice President Delcy Rodríguez and the mayor of Caracas, Erika Farías, Maduro accused the National Assembly in contempt of being an accomplices of that operation.

“The United States Government illegally appropriated Citgo and they have indebted it by 1.3 billion dollars, with the complicity of the bourgeois National Assembly,” said Maduro.

The Venezuelan leader reacted thus to the announcement of a group of Venezuelans appointed by the president of the parliament, Juan Guaidó, as the new board of directors of Citgo, who obtained a loan of 1,200 million dollars to five years to cover operating expenses and refinance debt.

The US Treasury Department issued unilateral “sanctions” against PDVSA in January, freezing $ 7 billion of its assets and said Citgo could continue to operate, but its profits would be deposited in an account that is blocked for the Venezuelan government.

Washington adopted these sanctions against Caracas after ignoring the new mandate of Maduro for the period 2019-2025, and instead recognized Guiadó, after he proclaimed himself  ‘president in charge’ of the country. Since then, there have been numerous disputes over the control of this subsidiary, considered to be PDVSA’s largest asset abroad.