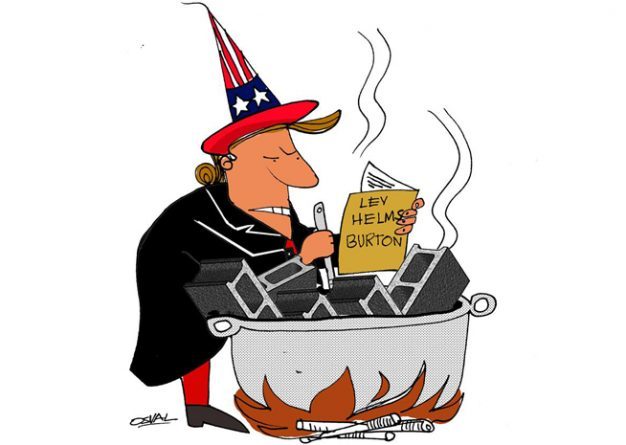 US President Donald Trump’s threat to apply for the first time in history the title III of the Helms-Burton Act has revived the debate and international rejection of a document that since its inception aims to suffocate the Cuban nation and its people .

From the Cuban News Agency, we propose to analyze some aspects through questions and answers.

1. What is the Helms-Burton law?

It was established in 1996, at the proposal of American congressmen Jesse Helms and Dan Burton. Its official name seems like a very bad joke: Law for freedom and Cuban democratic solidarity.

It is composed of four titles. The first contemplates the internationalization of the economic, commercial and financial blockade against the Antillean nation. The second raises a kind of political transition plan here and intervention of the United States (US) in our future.

The third states that claimants of properties nationalized or expropriated in Cuba must be protected, for which it establishes rules that include the possibility of suing before US courts entities that “traffic” with those properties.

The IV prohibits the entry to the northern nation of executives and their families, and owners of entities that “traffic” with the nationalized or expropriated properties. Here the word appears again (“traffic”), through which an attempt is made to simulate an environment of illegality in commercial relations, which is not real.

William Clinton was the American president who signed and enforced this law. He did it exactly on March 12, 1996. 3. What was the context?

Cuba resisted the Special Period, the most complicated stage for the economy after the revolutionary triumph in 1959, caused by the collapse of the Socialist Field and the resurgence of the Economic, Commercial and Financial Blockade by Washington.

On February 24, 1996, two planes of the terrorist organization “Brothers to the Rescue” were shot down in Cuban territorial waters, which entered the Cuban air space several times from Miami, and even overflew the city of Havana.

The US referred to those actions as humanitarian operations, but the truth is that these ships had had military uses before violating Cuban airspace and launching propaganda here.

RELATED CONTENT: Know the New Tool to Justify the US Military Aggression (liveuamap)

How to believe in “humanitarian operations” of the nation that since the beginning of the Revolution maintained a cruel blockade, bombed the airports of Ciudad Libertad, San Antonio de los Baños and Santiago de Cuba on April 15, 1961, paid and prepared mercenaries for the invasion by Playa Girón in 1961, coordinated terrorist acts and throughout history has filled an extensive list of acts against our people. What happened with those planes was the pretext for multiple actions.

4. What was the background?

The antecedents of the Helms-Burton are not reduced to the first half of the decade of the 90s of the 20th century, not even to all the acts against the country carried out and promoted after 1959. At this point we have to go back much further, from the Monroe Doctrine in 1823 and other dissimilar events.

5. What are the consequences for Cuba?

Its effects can not be expressed in figures, but they are huge as an attempt to submerge the population of the island in despair and create fear in investors and large companies around the world.

Many of the nationalized or expropriated properties are now hospitals, maternity homes, schools and other centers of popular benefit.

Attempts against freedom of trade and investment. It violates the laws and human rights of the Cuban people, the Constitution of the United States and several legal norms of that country; as well as numerous statutes of international law that regulate political, economic, commercial and financial relations between States.

It is repudiated by numerous nations, especially those that have economic relations with Cuba, including great powers such as China and Russia, and even US allies, where several businessmen are also against them.

8. Why has no US president implemented Title III?

The most elemental sanity made it remain only on paper, because of its broad extraterritorial nature. It is almost irrational to raise the possibility of suing before courts those who have business with companies and other Cuban properties, nationalized more than 50 years ago, as well as eliminate schools and hospitals to deliver the buildings to owners who in many cases no longer exist and they were exploiters and murderers. We recall that the process of nationalization here was carried out for very justified reasons of popular benefit and in compliance with international standards.

The previous leaders avoided its application by means of orders of temporary suspensions of six months. Doing so, applying it, could create conflicts with countries that have economic interests in the Caribbean island.

9. Why does Donald Trump threaten to apply this title III for the first time in history?

It is not isolated. It is part of the strategy against the entire left of the region. Cuba has received several recent actions, such as the withdrawal of US diplomats from the country for alleged sonic attacks, and the reduction of the validity period of B2 visas for Cuban nationals in the US, from five years with multiple entries to three months with one only opportunity to enter the North American territory.

Trump may already be thinking about the elections of 2021, and tries to please the anti-Cuban sector, which includes several of his advisers. 10. What alternatives does Cuba have to continue with its economic development plans in such a complex context?

Of course, this whole situation has an economic effect, but another Special Period is impossible here. The country has strong commercial relationships and long-term investment projects with multiple nations.

The new Constitution, the steps taken as part of the Plan of the Economy until 2030, the Guidelines for the Economic and Social Policy of the Party and the Revolution, the internal infrastructure, and other actions within the country create a very different scenario now from that of that prior moment.

In 1990, for example, tourism began to be defined as a promising economic sphere that received about 340 thousand foreigners that year.

Today, the development in that area is much greater, with several million visitors each year. To that we can add the export of services at present, the progress of Biotechnology and the Pharmaceutical Industry, the diversification of energy sources, which previously depended totally on fuel, and many other factors.

We must all be aware that progress will always depend, to a large extent, on ourselves and our ability to produce, save and build a future of progress. Cuba remains a benchmark in international politics, with a strong and prestigious diplomacy, essential elements to find alternatives at the global level, without ever forgetting the essentials.