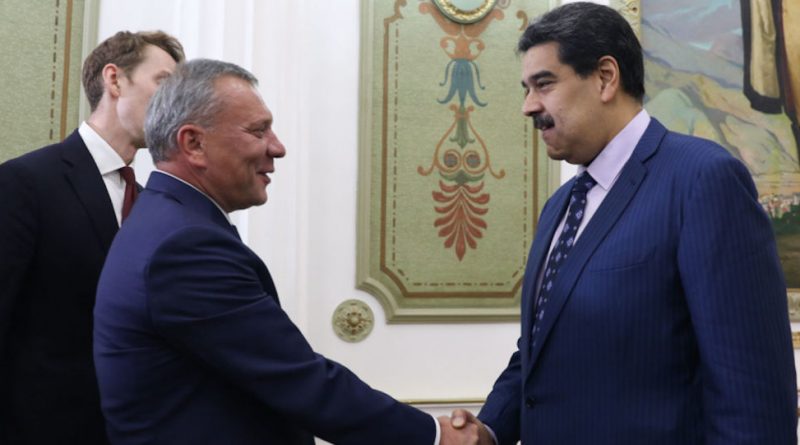 Venezuelan President Nicolás Maduro held a meeting with Deputy Prime Minister of Russia Yuri Borisov in the framework of the High Level Intergovernmental Commission (CIAN) between Caracas and Moscow, which was held in the South American nation.

“Meeting with His Excellency Yuri Ivanovich Borísov, Deputy Prime Minister of the Russian Federation,” said the president on the social network Twitter.

During the meeting, Maduro stressed the importance of Borisov’s visit as an opportunity to consolidate the progress made during the recent visit of the Venezuelan president to Moscow where he met with his Russian counterpart, Vladimir Putin.

In addition, the president of Venezuela announced that they renewed agreements on military technical cooperation during the meeting with Russia.

The president also indicated that they and Moscow have advanced in agreements on oil and gas in a day that he described as “extraordinary”.

“There are new economic ventures with technology transfer, participation of Russian companies in all strategic production areas of the country, we have renewed and advanced tremendously throughout the oil, gas, basic business area,” he said.

The head of state also said they agreed to launch new “very advanced” projects in the agricultural area with a direct presence of Russian investment, technology and advice.

According to the Venezuelan Ministry of Communication, the day culminated with the signing of new agreements in the fields of energy, technology, agriculture and military .
“We have economic and financial advice from Russia (…)that are doing very well and they produce documents, suggestions, proposals for us, just as we have a central commission for economic and financial advice with China (…) we have global advisors including from the United States and Canada that help us in the vision to form a solid proposal for national development,” he said.

Earlier, Vice President Delcy Rodríguez and Foreign Minister Jorge Arreaza received Borísov at the Yellow House, headquarters of the Foreign Ministry, in the west of the capital.

The Russian Deputy Prime Minister chaired together with the Vice President of the Economic Area and Minister of National Industries and Production, Tareck El Aissami, the 16th CIAN meeting, in which both nations highlighted the progress in trade relations.

Aissami said that relations with Russia have contributed to the “construction of a solid and robust brotherhood that has materialized with the signing of numerous agreements and monitoring of our strategic alliances, resulting in large projects in the energy sector with Russian investments by the order of 4,000 million dollars, as well as a significant growth of 10% in commercial exchange in recent months.”

For his part, Borisov said that trade between Russia and Venezuela has increased by 24.6% in 2018 compared to the previous year.

RELATED CONTENT: Russia Reinforces Support for Cuba in Face of US Hostility

“Venezuela is a very important trading partner for Russia in Latin America (…) trade between Russia and Venezuela has increased by 24.6% in 2018 compared to 2017 (…) this year’s growth trend is still preserved, of the seven months of this year have grown compared to last year by 10%,” he said.

The Venezuelan Government has ensured that close cooperation with Moscow has resulted in 264 agreements signed so far, in 20 strategic areas among which are: energy, military technical cooperation, mining, finance, agriculture, industries, commerce and transport.

Maduro recalled on October 2 that in April, Moscow hosted the High Level Commission, where several issues of the bilateral relationship were addressed and 11 agreements signed.

“For the next meeting of the High Level Intergovernmental Commission, we will try to prepare a strategic document that defines economic, commercial, scientific, technological and cultural relations between our countries at least until 2030,” said Borisov.

The Russian Deputy Prime Minister said his visit to Caracas was “purely technical.”

“We discuss the specific issues related to the increase in bilateral trade and the recovery of the Venezuelan economy,” he said.