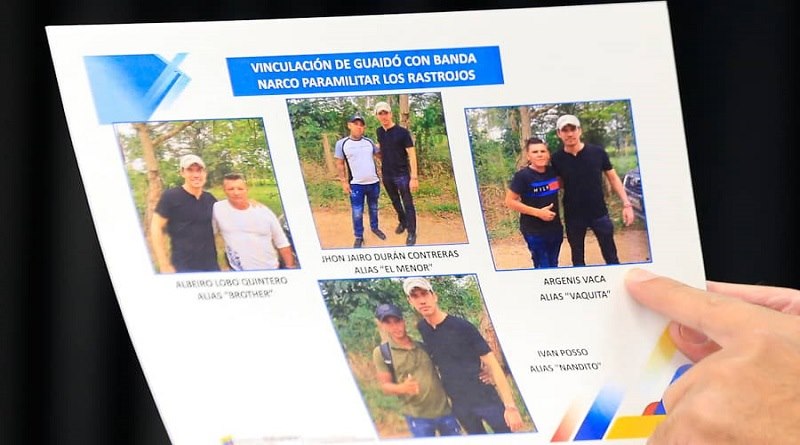 At least 16 people have been killed on the border between Colombia and Venezuela after the revealing of the photos of the extreme right deputy Juan Guaidó with leaders of the narco paramilitary group “Los Rastrojos”, this was announced by Wilfredo Cañizares, director of the Colombian organization Progresar Foundation in an exclusive interview with the Diario VEA.

The interview reveals that the murders of these people occurred between eight and 16 days after the publication of the images, which were revealed both by Venezuelan authorities and by Colombian media.

They show the reception of honor, on February 23, of the deputy of Popular Will by the criminal “escort” that would lead him, later, to board a Colombian government helicopter; he foresaw the destabilizing acts against the Constitutional President Nicolás Maduro which were masked in the delivery of a supposed “Humanitarian Aid”.

“There were some deaths, some murders, even the dismemberment of some people,” says Cañizares to the Venezuelan media.

The human rights defender explained that the purpose of these actions was to break communication with alias “El Menor”, Jhon Jairo Durán Contreras, who assumed the direction of the criminal group this year; and alias “El Hermano”, financial leader of the criminal organization; who were detained after surrendering to the Colombian authorities.

On September 19, the Attorney General of Venezuela, Tarek William Saab, revealed that four relatives of Hernando Iván Posso, aka “Nandito,” who also appears in one of the photos with Guaidó and who is the right hand of alias ” The Minor ”, were killed to“ silence him”.

Another interesting fact of the interview is that at least of the 16 murders, five allegedly were committed by to the Los Pelusos group; a band with which Los Rastrojos have a struggle for control of the territory.

According to Colombian media, the clashes between both groups, due to the recent loss of a large sum of money they had through drug trafficking businesses, has resulted in the murder of 15 people.”

Among those murders would be the four men who were abandoned Tuesday night in the sector ‘El Infierno’, in the Miraflores village, of the corregimiento Banco de Arena” (Colombia), indicates a press release from the media La Opinion of Cúcuta published this last 20th of September.

The Colombian human rights defender also revealed that “there are at least three people killed of whom no identification has been reported. While of the other eight, there are five confirmed because they were locals. ”

It is worth remembering that in the published images, Juan Guaidó also is seen posing with Argenis Vaca, aka “Vaquita”, who has committed crimes of homicide, kidnapping, extortion, drug trafficking and association to commit crimes and together with Jhonatan Zambrano, alias “Patron Pobre”, who was head of the cells responsible for the kidnappings in the towns of La Fría and Boca de Grita, in the Táchira state (Venezuela).

The paramilitary narco group “Los Rastrojos” controls the North of Santander with the purpose of this territory serving as a drug corridor that goes from Colombia to Venezuela and whose final destination is the Mexican cartels Cartel de Sinaloa) for distribution in North America, especially the United States.