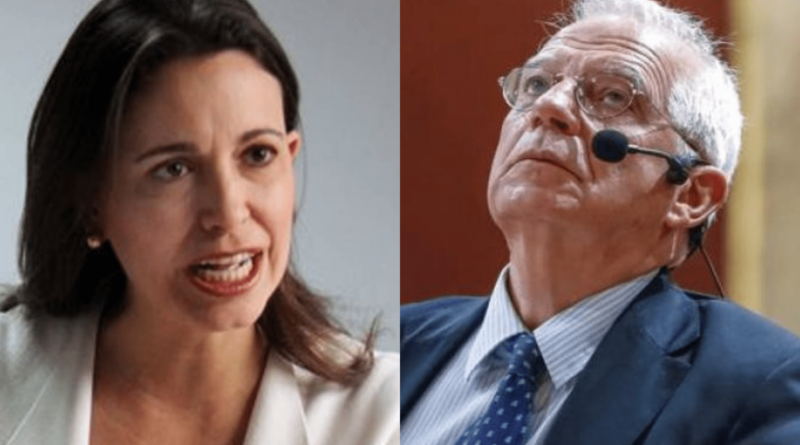 Through a post on her social media accounts, Machado questioned Borrell’s altercation with the National Electoral Council (CNE) and Venezuelan political leaders. On Friday, October 8, Borrell had commented that the EU electoral observation mission’s report will “legitimize or delegitimize” the November 21 elections, and the CNE asked Borrell for an explanation regarding his interventionist statements. Machado, however, considers the whole episode a show.

“Does anyone really believe the ‘feud’ between the regime and Borrell?” remarked Machado in her post. “Everything is part of a choreography of deception.”

Machado asserted that the Venezuelan authorities must be interested in granting autonomy and credibility to the EU mission, whose attendance at the November 21 elections was confirmed 2 weeks ago by Borrell himself. Machado has claimed that the Bolivarian government is expecting some sort of benefit in return from the EU.

Holding a grudge
When Borrell had confirmed that the European Union would send an electoral observation mission, Machado, the national coordinator of Vente Venezuela party, “got mad” and did not hide her annoyance. She reacted with attacks against the EU high representative.

Machado also criticized the opposition parties that registered their candidates for the elections. Vente Venezuela is among very few parties not participating in the 21N regional elections.

The right-wing sectors that are participating in the elections insisted on the importance of having international observers who are not ideologically or politically aligned to President Nicolás Maduro. In turn, Josep Borrell has pointed out that the EU observers in the mega-election will act as a guarantee for the right wing.

Machado, however, claimed that the presence of an EU electoral mission is a “serious mistake by the European Union which does not help the democratic struggle of the Venezuelan people, but rather the permanence of the regime. This violates the technical and political standards of the EU for Electoral Observation Missions, and affects their credibility.”