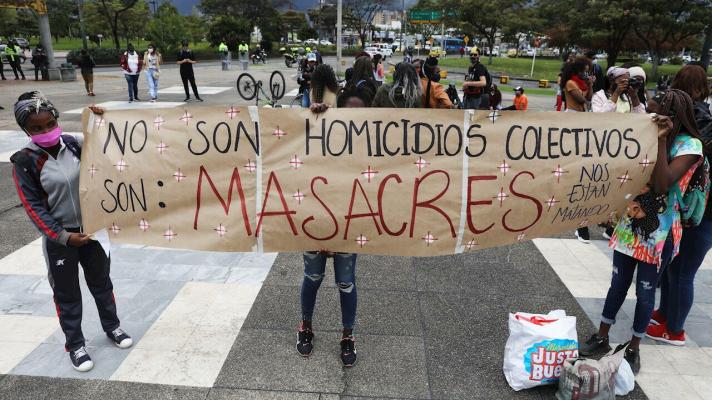 This Sunday, August 8, Colombia’s Institute for Development and Peace Studies (INDEPAZ) reported another massacre in Colombia—the 65th registered this year alone—this time in the Putumayo department.

According to INDEPAZ three people were murdered in the municipality of San Miguel and Valle del Guamuez. “Three men of Venezuelan origin, from the same family were murdered,” wrote INDEPAZ. “The events occurred between Thursday and Friday.”

The Ombudsperson’s Office had issued a resolution classifying the area as highly dangerous due to the presence of various illegal armed groups including paramilitary outfits Los Azules and Los Bonitos and FARC dissidents from the Segunda Marquetalia group.

In addition to the humanitarian catastrophe caused by the COVID-19 pandemic, Colombians must face a lack of policies that guarantee security. So far this year, in addition to the 65 massacres reported  in the country, at least 103 social leaders have been murdered.

Another phenomenon that has arisen in Colombia is the systematic murder of the peace agreement signatories. This Sunday, for example, eight armed men killed Gilberto Samboní, who was part of the reconciliation process.

INDEPAZ asserts that, with the recent event in the country, 34 ex-combatants have been assassinated in the eight months of 2021, and 281 signatories of the Peace Accords have been killed since the agreement was brokered in Havana in 2016.