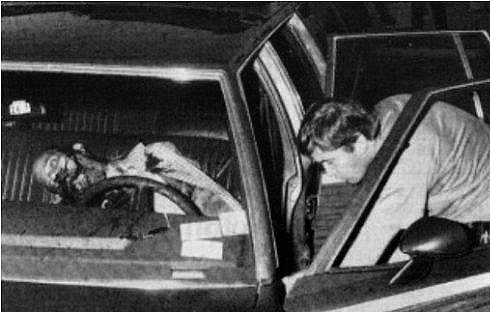 Cuban State Security has documented 581 acts of aggression in 41 countries against the island’s diplomatic personnel and buildings abroad. Here I am talking specifically about two that touched me personally. The high-powered bomb that exploded in the Cuban embassy in Lisbon around 5 p.m. when the young children of Cuban diplomats returning from school were entering the place. Like lightning it struck Adriana Corcho Calleja and Efrén Monteagudo Rodríguez, 35 and 33 years old respectively, officials of the diplomatic headquarters. The device was left next to the door of one of the departments that formed part of the Cuban embassy by an individual who entered the old building and left in a hurry.

That was April 22, 1976, four months after Cuban troops defeated a major attack carefully organized by the CIA against the nascent People’s Republic of Angola. The United States launched a powerful column of the racist South African army, numerous forces from neighboring Zaire and experienced white mercenaries against the young state. Realizing what was coming, Angolan President Agustino Neto requested Cuba’s support. I had met Adriana during a journalism assignment Lisbon during the Carnation Revolution and this made me shudder even more at the news of the terrorist attack. Very close to where the bomb exploded we had talked on more than one occasion and I was able to get an understanding of her revolutionary thinking, professional competence and solid character.

The first military defeat by Cuba in Angola – and even a much more resounding one in 1988 – infuriated the government of President Gerald Ford and in particular the CIA. Just six months after the crime in Lisbon and following another one with the bombing of the Cubana Airliner over Babados killing 73, Fidel Castro said, “In recent months the U.S. government, resentful of Cuba’s contribution to the defeat suffered by the imperialists and racists in Africa, along with brutal threats of aggression, unleashed a series of terrorist activities against Cuba. That campaign has been intensifying for days and has been directed, fundamentally, against our diplomatic headquarters and our airlines.”

On September 11, 1979, Félix García, my friend and diplomat from the Cuban mission to the United Nations headquarters in New York, was on his way to a dinner in the Queens neighborhood, after having accompanied Chilean friends to an event to remember President Salvador Allende, who had been assassinated exactly six years earlier in a coup d’état orchestrated by the CIA, but he never reached his destination.

When his car stopped at a traffic light, the terrorist Pedro Remón, trained in this type of action by the US intelligence agency, fired a burst of shots at him from a motorcycle, ending his life. Never again would Felix light up my office at Bohemia magazine with his blithe Creole words and personal compassion.

Felix is the only case of a diplomat accredited to the United Nations who has been killed in New York. Remon claimed responsibility for the crime in calls to the media, but it was not until the late 1980s that he was tried and convicted by a U.S. court, when his bloody terrorist actions had begun to damage Washington’s interests.

By the way, as soon as he served his sentence he continued his terrorist activity against Cuba, inside and outside the United States, with absolute impunity.

These two cases are among the most notable attacks perpetrated against Cuban headquarters and diplomatic officials, but blood has also flowed in many others, not only Cuban, but of people of other nationalities. Right here in Mexico, the same terrorist Pedro Remón took part in an attempted kidnapping, in 1976, of Daniel Ferrer Hernández, the Cuban consul in Mérida, in which the Cuban fishing technician Artagnan Díaz Díaz was murdered.

The history of terrorism against Cuba and, in particular, against its diplomatic headquarters, is a long one. But there is reason to believe that the fascist mafia in Miami and the cronies in the (dis)government of Donald Trump intend to encourage a return to such practices.

The United States continues to be complicit in the machine-gunning of the Cuban embassy in Washington on April 30. And yet not a word about such a serious event from the State Department seems to hide something unutterable. If this attack is not investigated and cleared up in accordance with the laws of the United States and the Vienna Convention on Diplomatic Relations, it will set a terrible precedent.