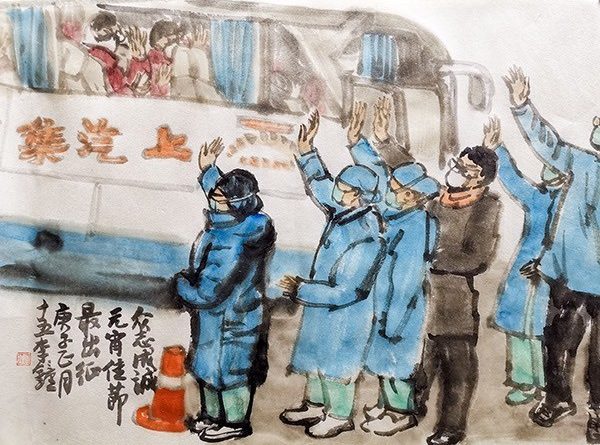 The cruel pandemic that is battering humankind has evoked reactions of all kinds. A few see it as the cruel but fertile epiphany of a better and more fortunate world that will sprout as an inexorable conclusion to the generalized destruction unleashed by the coronavirus.

If Edouard Bernstein believed that the unfolding of the inherent economic contradictions would, by themselves, inevitably do away with capitalism, his modern (and unconscious) heirs are betting that the virus will carry out the miracle of abolishing the social system now in place and replacing it with a better one. The religious or messianic background of this belief springs to view and exempts us from further analysis. Others perceive it as a catastrophe that closes one period of history and places humanity in a dilemma whose outcome is uncertain. Those who partake in this belief are far from being a homogenous group, since they differ in two central themes; the cause or origin of the pandemic, and the world that will be formed after its conclusion. With regard to the former, there are those who judge the responsibility of its appearance to a figure of fantasy “mankind,” like the ingenuous ecologists who say that mankind – understood in a generic sense as humankind – has, with our activity, destroyed nature, and thus COVID-19 is also “man-made.” But the truth is that it is not man, but rather a system, capitalism, which destroys nature and societies, as Marxist thought demonstrates and even according to those like Karl Polanyi who, without adhering to Marxist thought, are rigorous analysts of reality. It is the system that, with its politics of privatization and “austerity measures” (for the poor, but not for the rich), has made the great spread of the pandemic possible.

The conclusion here is that governments who relied on the” magic of the free market” to take care of the health problems of their populations show indices of mortality per million inhabitants immensely greater than those of the socialist countries who conceive of healthcare as an inalienable human right. This is proven even in countries like Cuba and Venezuela in spite of the many economic sanctions and the difficulties of the criminal blockade imposed by Washington.

In the Southern Hemisphere, we find Brazil in 6th place in the statistics of tragedy, with 18,130 deaths from coronavirus for a rate of 85 deaths per million inhabitants; this rate is 12 times greater than that of Cuba and 28 times greater than that of China. In its turn, Chile, that paradigm of neoliberal excellence, has a rate 9 times greater than that of China and almost 4 times larger than that of that little Caribbean island under constant attack. Uruguay deserves its own paragraph, where, thanks to 15 years of state activism by the governments of the Frente Amplio, for whom investment in public health was a priority, there is a rate of 6 deaths per million inhabitants. We must expect that the current president, Luis Lacalle Pou, a confessed admirer of Jair Bolsonaro and Sebastián Piñera, will take note of this lesson and refrain from applying his lethal neoliberal fantasies to the public health system of Uruguay.

This completely dissimilar response made by capitalist and socialist countries ( beyond some necessary clarifying explanations of this characterization, which is the subject for another work) is sufficient to form the basis for our insistence that the new world that will emerge as the nightmare of COVID-19 concludes must be characterized by definitively non-capitalist features. That is to say, a social and political order that reverses the insane notions of the last 4 decades during which almost all the world’s governments, dancing to the treasonous neoliberal tune, hastened to follow the directives coming from the White House and privatize and commodify everything that might be privatizable and commodifiable, even at the price of violating human rights, the dignity of the people, and the rights of Mother Earth.

A world that, following some of the reasoning of Salvador Allende, might be characterized as “proto-socialist”, which is to say an indispensable phase for making viable the transition to socialism. This period is needed to make the democratic state stronger, introduce rigid limits on the “killing instinct” of the markets and their uncontrolled activity, especially in the financial sector; for nationalization and state control of the basis wealth of our countries, the assumption of state power over foreign trade and public services, the de-commodifying of healthcare and medications, and an aggressive policy of redistribution of wealth that presupposes a profound tax reform and a very active social policy of elimination of the scourging of the poor. Taking into account the havoc wreaked by COVID-19 (which has not yet reached its peak) on its victims, it would be a monumental idiocy to “return to normal.” Only perverted spirits with an insatiable greed for money could expect to repeat their crimes and again sacrifice millions of people and nature itself on the altar of profit; considering these crimes as a “normality” that cannot and should not be questioned. How is it possible to think that the social and ecological holocaust that capitalism has produced, hyperbolically potentiated by the pandemic, could be considered something “normal,” as if it were a situation to which we should return without delay? A “normality” like this should be definitively banished from our consideration as a civilized option. It could only be imposed by a neofascist reformation of capitalism, an unlikely occurrence in view of the loss of prestige and of perceived legitimacy which it has undergone in recent times, and because of the massing of social forces aligned against the executioners and torturers of the past. It is clear that history is not finished, but I am sure, returning to the words of Salvador Allende, that after the end of the pandemic, “great avenues will open on which men and women can pass, on their way to building a better society.”