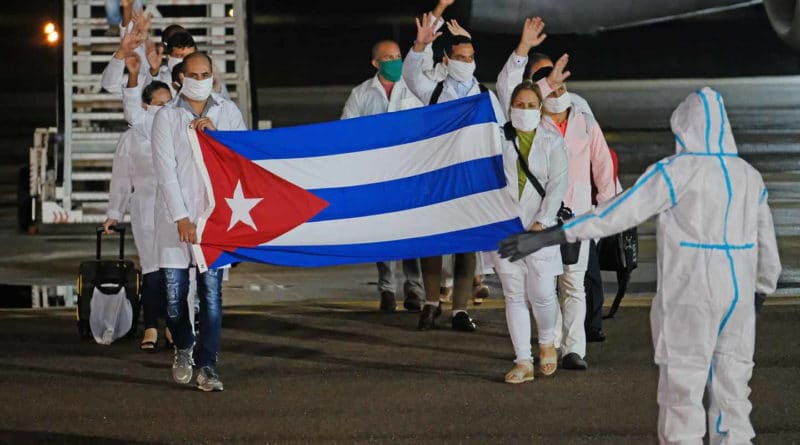 The Trump administration describes Cuba’s medical response teams as “slaves”—we asked the doctors for their take.

Cuba has sent more than 2,000 doctors and nurses to 23 countries since the crisis broke.

Emergency medical response teams from the island have touched down in Latin America, Africa, the Middle East, and—for the first time—Europe. In March, the first batch of 51 Cuban doctors and nurses arrived in Lombardy, Italy, at the time the epicenter of the pandemic, to cheering crowds.

They join the 28,000 Cuban health professionals who were working in 59 countries prior to Covid-19.

No other country has sent large numbers of doctors abroad during the pandemic. The radical intellectual Noam Chomsky last month described the island as the only country to have shown “genuine internationalism” during the crisis, and the women-led anti-war organization Code Pink is now leading calls for the island’s emergency medical response teams to be awarded the Nobel Peace Prize. But these medical brigades have received little media attention in the United States. When they are commented on at all, coverage is usually negative.

In fact, for the last three years, the Trump administration has described doctors participating in these missions as “slaves” and has accused the Cuban government of “human trafficking.” At the same time, Trump officials have suggested that tens of thousands of those “on mission” are not doctors at all but regime henchmen deployed to “sow political discord” and spread the virus of communism. Cast in this light, Cuban doctors are at once victims and oppressors.

Stories in major media outlets paint a similar picture. Cuba’s medical collaboration is portrayed as Machiavellian, reduced to a PR ruse to deflect attention from Cuba’s internal human rights violations, a means of projecting soft power, or a way of meddling in other countries’ affairs.

And while it is sometimes granted that the medics themselves improve health outcomes in poor countries, the Cuban government is alleged to exploit these doctors by “pocketing” most of their earnings.

Such depictions never include the voice of the Cuban doctors who work in these missions. Over the last couple of months, I’ve spoken to dozens of doctors before their departure. Their words cut sharply against this picture.

RELATED CONTENT: State of Minnesota Calls for Medical and Scientific Collaboration with Cuba

Dr. Gracilliano Díaz, a veteran of the campaign against Ebola in Sierra Leone in 2014, dismissed with Caribbean cool the idea that he is a victim of trafficking. “We do this voluntarily,” he said with a lilt. “It doesn’t matter to us that other countries brand us as slaves. What matters to us is that we contribute to the world.”

Next to a memorial to Cuban health professionals who have died abroad, I asked Nurse Carlos Armanda why he was risking his life to treat people in Italy. Looking me in the eye, he told me, “If you live here, you know why.”

Belly of the Beast speaks with Cuban doctors and nurses before they depart for St. Kitts and Nevis, Angola and Italy.

Reporting from Havana for the last seven years, I have gotten to know a lot of doctors. It’s hard to avoid them: Cuba has by far the highest doctor-to-patient ratio in the world. I’ve had check-ups from family doctors in local clinics and CAT scans by neurosurgeons. I’ve chatted to doctors while waiting in line to buy chicken, cooked for them, played dominoes with them, and gotten drunk with them. Last year I helped make a documentary about a friend who, fed up scraping by on his $55-per-month salary, left medicine to become a cabbie.

As doctors have shared their stories with me, I’ve built up a sense of why they go on the missions. Alex Carreras spent years working in an AIDS clinic in Botswana. Treating diseases eradicated in Cuba that he had previously only read about in textbooks was, he said, a major motivation for going: “Doctors want to prove themselves in different environments.”

While in rural Venezuela in 2008, geneticist Greicy Rodríguez worked with populations that had never previously seen a doctor. She once revived a baby close to death from dehydration. “Her family ended up naming her after me,” she said. “It was a beautiful experience.”

During his time in Northern Brazil, Javier López, a specialist in traditional Chinese medicine, worked closely with indigenous communities, helping them revive plant-based remedies that had been stamped out. “I’ve always had the impetus to help,” he said.

Some go for the money. Yanet Rosales, a 36-year-old family doctor, earned $900 a month in the small city of Poços de Caldas in Brazil—much less than her Brazilian colleagues, but more than 10 times her salary at home. “You earn much more than what you get in Cuba,” she told me after she’d come back from a mission. “I always wanted to travel and meet people in other countries. This was my chance.”

Yanet was paid around 25 percent of the revenue the Cuban government received for her services. She thought a 50/50 division would have been fairer, but denied that she was a “modern slave,” as revenue from the missions pays for free health care in Cuba. “When some patients said we were being robbed, we told them this wasn’t the case,” she said. “Here in Cuba nobody gets charged for a hip replacement or an MRI scan—but these things are expensive.”

More than 1,000 Cuban doctors and nurses working on the Mais Médicos (More Doctors) program in Brazil from 2013 to 2018 decided to “desert” Cuba—some for economic reasons, some because they fell in love. Yanet decided to return and use her savings to buy a four-bedroom apartment in Havana. After I first interviewed her, she gave me a tour of her home, showing me the electric coffee grinder and giant plasma TV she brought back from Brazil.

Over the last decade, the leasing of medical professionals has emerged as Cuba’s most lucrative export activity. It generated $6.4 billion in 2018, bringing in more money than rum, sugar, and cigars combined.

This revenue pays for free health care and education through the university level, and to sustain art, music, and culture, and there’s no evidence the money is being siphoned off by a corrupt elite. Corruption at the higher echelons of the Cuban government is low compared to other countries in the region: The NGO Transparency International ranks Cuba as one of the least corrupt countries in Latin America. And as petroleum shipments from Venezuela, the island’s main ally, decrease, this money is increasingly needed just to keep the lights on.

Some of the revenue subsidizes missions to countries that can’t afford to pay for them. While Cuba charges oil-rich states like Angola for “professional services,” it provides thousands of doctors and nurses to low-income Latin American and sub-Saharan countries at cost or for free. And though it’s unknown whether Cuba is charging for the coronavirus-focused missions, the island has never previously charged for emergency medical response to earthquakes, hurricanes, or epidemics.

The money also helps the Latin American School of Medicine, which has graduated 29,000 doctors from more than 100 countries over the last 20 years. Medical education is provided for free to people from communities with poor access to health care on condition that upon graduation they return to serve their communities. Some of these doctors are now dealing with Covid-19 in the United States.

There’s also the fact that doctors that go on mission come back rich, compared to most Cubans. They live in nicer houses, have flashy amenities, and eat more meat. Today’s internacionalistas are Cuba’s middle class. In seven years of conversing with medics in Cuba, I’ve never met a doctor or a nurse who said they were forced to work abroad. Waiting lists are oversubscribed. And some doctors even pay to cut in line.

John Kirk, an academic at Dalhousie University in Nova Scotia, who has spent over a decade studying Cuban medical internationalism, says Cuba sends medical staff abroad for many reasons. “It generates funding to maintain Cuba’s excellent health care system—in many ways on par with those in the Global North. But there is also a strong element of altruism, of the need to collaborate and share Cuba’s impressive human capital—something which is clearly stated in the preamble to the national constitution.”

“We in the Global North are not used to seeing altruism to this degree,” he added. “But it is in the Cuban DNA.”

The Trump administration has intensified the US government’s decades-long economic war against Cuba, targeting the island’s energy supply and tourism industry. But more recently, both in rhetoric and action, it has weaponized health care, pressuring allies to cancel accords with Cuba.

After a US-orchestrated civil-military coup six months ago, one of the first acts of the new regime in Bolivia was to kick out 725 Cuban medical professionals. A vehicle with US diplomatic plates was photographed outside one of the locations where Cuban doctors were interrogated prior to their expulsion.

With Covid-19 halting tourism, Cuba is more reliant than ever on its international medical program to stay afloat. Cuban-American hard-liners who run Trump’s Latin America policy have sensed their moment and ratcheted up their attacks; choking off revenue from the medical programs could cripple the Cuban economy, paving the way to regime change. As the coronavirus crisis has pushed more countries to request Cuban medical assistance, Florida Senator Marco Rubio and New Jersey Senator Bob Menendez this month began lobbying for US embassies around the world to “inform” governments hosting Cuban doctors about the “Cuban regime’s forced labor practices.”

Though US sanctions blocked a shipment of masks, gloves, and ventilators from reaching the island in April, they have not substantially undermined Cuba’s domestic response to Covid-19. Through vigorous contact tracing and enforced isolation of suspected cases, Cuba has successfully corralled the virus, registering fewer than 2,000 cases, more than 50 times fewer per capita than in the United States.

Those who pay the highest price when the Trump administration wins are people in small towns, indigenous villages, and urban slums. The withdrawal of Cuban doctors from Brazil, for instance, sharply cut back access to health care for 28 million people. As a result, according to the Pan American Health Organization (which is linked to the World Health Organization), 37,000 young Brazilian children may die in the next decade.

For Kirk, right-wing regimes like the Trump administration, Bolsonaro’s Brazil, and the post-coup government in Bolivia have an ulterior motive. “Cuban doctors represented the threat of a good example of what public health could be—and that’s why they had to be stopped.”

“As the Cubans pull out, the people who are being screwed are the people who have had health care for the first time and will now no longer have it. It’s criminal to play politics with people’s lives.”

Ed AugustinEd Augustin is a journalist based in Havana. He writes for The Guardian, broadcasts for Al Jazeera, and makes films for Belly of the Beast.