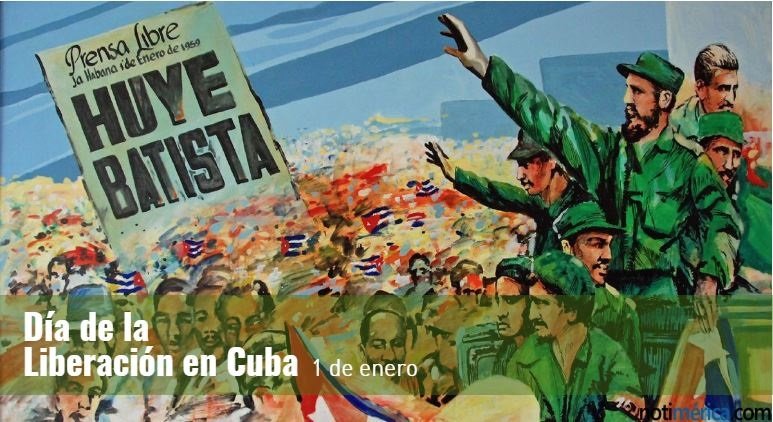 Some time ago in another late December, my partner in life commented that she liked beginnings in reference to the approaching new year. I became immediately aware that other traditions may have a calendar different from the Gregorian calendar and the beginning of their new year may take place at a different time. But the notion of “beginning” intrigued me, especially because I had another upcoming beginning in my political mind.

A beginning can mark any event, like for instance the start of a special day that we acknowledge with some ritual. There may be beginnings that are ominous like those of natural disasters or traumatic experiences; others can be unique and personal like the beginning of life at birth; yet others are uplifting like the beginning of a relationship. Whichever event we go through, often we remember its beginning as an anniversary or worthy of celebration.

For me at this time of the year, it is inevitable to remember the momentous day when the protracted revolutionary process in Cuba came to fruition on January 1, 1959 marking the triumph of the Cuban Revolution with the ousting of the dictator Fulgencio Batista and the attaining of the long overdue independence from foreign and oligarchic dominance. That is an historic beginning that I inevitably remember and personally celebrate every year. My celebration is not with fireworks or public display but more like a time for introspection and reflection on some of the events that led to that new start. Although I was too young to have been aware of that historical moment at the time, I am quite acquainted with Cuba and I have come to know some of the historical leaders of the Cuban Revolution. I consider myself privileged to be a contemporary of those personalities.

The modern history of Cuba is quite rich and full of human episodes. Its retrospective study gives an insight in the determination of Cubans to resist any foreign intervention. After long years of fighting the Spanish colonization in the 19th Century, Cuba was close to achieving its independence goal militarily, but a false flag incident of the explosion of the US battleship Maine in the Havana Bay in February 1898 – blamed on the Spanish – was used by the US as a pretext to intervene in the Spanish-Cuban war. “False flag” acts are frequently used today but it’s an old military tactic. There is another infamous false flag act committed later in April 1961 when the US-sponsored invasion of Cuba at Bay of Pigs was carried on with planes painted with the colours of the Cuban air force to deceive the population and the revolutionary government itself as a mutiny was occurring. The invading mercenaries were eventually defeated and taken prisoners in less than 72 hours.

In 1898, despite the Cuban troops’ advantage over the Spanish, and despite the Cuban troops’ protection of the US landing of its army, Cubans did not receive any recognition. They were in fact ignored. Spain surrendered to the US in the Paris Treaty of December 1898. On January 1, 1899 the possession of Cuba was transferred from Spain to the United States. An inauspicious beginning that would rather be forgotten, but history is there so we don’t forget. And Cubans didn’t.

The importance of Cuba for the US was, and still is, mostly strategic for its geographic position as a virtual protective gate to the gulf of Mexico. Cuba also was used for economic exploitation of its vast sugar cane and other produce plantations mostly in the hands of US corporations. That was sufficient for the US government to turn a blind eye to the extensive mafia gambling activities, tax havens and other illegal dealings taking place in Cuba. The different puppet regimes governing the country had a total disregard for the well-being of Cubans who lived in extreme poverty and abject conditions especially in the rural areas.

This was the social situation under the corrupt regime of Fulgencio Batista that the revolutionary movement of Cuba in the mid-20th century was attempting to overturn. The first major attempt took place on July 26, 1953 when Fidel Castro led an attack at the military garrison in Santiago de Cuba that failed. The struggle continued including more than two years of guerrilla warfare. In the words of Fidel Castro “five years, five months and five days” passed from that day until victory was finally achieved liberating the whole country of six million Cubans.

In my personal reflections I always respect the moral qualities of Fidel Castro exemplified by his modesty. He always discouraged the personal idealisation of himself and I think that he set the standard from the very beginning. While revolutionary commanders Ernesto “Che” Guevara and Camilo Cienfuegos entered into Havana on January 1 and took over the two large military garrisons without resistance, winning over the majority of the soldiers, Fidel was still in Santiago de Cuba, almost a thousand kilometers away. He did not rush to the capital to be acclaimed. He took the trip by road stopping at every major Cuban city to connect with the people who had been his supporters and had been the most ignored historically. He arrived in Havana eight days later.

Following his death in November 2016, a funeral procession carried the casket with his ashes symbolically travelling the same route back from Havana to Santiago de Cuba. Large crowds stood along the way to pay their final respects. His brother, Raul Castro, stated one of Fidel’s dying wishes: that his image and name never be used in public places, from streets and parks to government institutions. Legislation to that effect was passed by the Cuban National Assembly.

January 1, 2020 will mark the 61st anniversary of this legendary revolutionary beginning, and the term beginning is very appropriate because it indicates a continuous process of transformation of what it’s called today: a Revolution in motion. At every step, a true social advancement is made. The human and social development of this small nation is outstanding by any stretch of the imagination while subjected to the most crushing economic and financial blockade by the United States from 1962 to this day. The UN Human Development Report of 2019 states, “Cuba’s HDI [Human Development Index] value for 2018 is 0.778— which puts the country in the high human development category— positioning it at 72 out of 189 countries and territories…above the average of 0.750 for countries in the high human development group and above the average of 0.759 for countries in Latin America and the Caribbean.”

I am truly convinced that be it a personal change or a social revolution, a true transformative beginning must be marked by a creative process and a radical change with the profound conviction that a better world is possible.