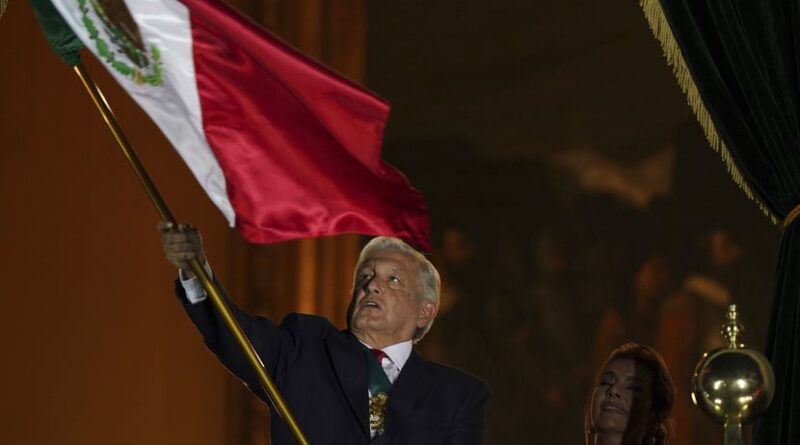 Mexico is a lot more Mexico now. It does not mince words. Everything is big here. If a proof was needed, the celebration of the Grito de Dolores in the year of the Bicentennial was the proof.

Dazzling play of lights and fireworks lit the night before, in the central Zócalo square, brimming with pre-Hispanic images and symbols and also with figures of national heroes animated by video projection while all kinds of popular songs were heard, reflecting the various regions of the country.

There was not a spectator in the Plaza because of the COVID 19 epidemic, but sentimentally it was overflowing with a spirit of liberation and a remarkable Latin American breath. For those who did not notice, there was only one singer and one song: the very revolutionary song Latinoamérica ​​from Calle 13, in the voice of Lila Downs (1).

Andrés Manuel López Obrador, AMLO for Mexicans, had announced a surprise for the night that people traditionally celebrate to the point of exhaustion in all the main squares of the country. There were many expectations from his compatriots because meeting in the Zócalo square is something, but it has not happened in the last two years. The statistics of COVID 19 are alarming here. More than 200 thousand deaths and more than 30 million infections have already accumulated.

They say that there were dozens of residents of the capital who insisted on jumping the fences, nostalgic for their main festival in the year of the independence bicentennial. But there were no concessions. Parties were held in the privacy of homes, with the same discipline with which the inhabitants of Mexico City themselves wear their masks at all times and everywhere. And at 11 o’clock, even the most reluctant to put the television on were hooked by the commemorative act.

AMLO and his wife, Doña Beatriz Gutiérrez Müller, leaning out on the presidential balcony of the Government Palace, observed a minute of silence for all the victims of the omnipresent pandemic. Then came his words, so his, so the same, and so different from those of previous presidents. The same in the three cheers to Mexico and mention of the fathers of the nation. Different in his mention of the anonymous ones, in the cheers to honesty, equality, love of neighbor… Then, the tricolor national flag waved in the hands of the president. And the surprise began, that outburst of lights, color, but especially of emotional praise of the great nation that this industrious and noble people, passionate and supportive, raised above the ashes left by three centuries of colonialism.

RELATED CONTENT: AMLO Wants OAS Replaced with a Body ‘Not a Lackey to Anyone’ – President Maduro Agrees (CELAC)

The statue in honor of Columbus is no longer on the great Paseo de la Reforma. In its place will be put, at least temporarily, the head of a Toltec woman. It is one of the actions promoted by the head of the government of Mexico City, Claudia Sheinbaum. In Mexico, her name is mentioned together with that of Foreign Minister Marcelo Ebrard as possible Morena candidates for the presidency to give continuity to the already historic presidential term of AMLO.

Today, Mexico has welcomed, as the status of special guest, the First Secretary of the Communist Party of Cuba (PCC) and President of the Republic of Cuba, Miguel Díaz-Canel Bermúdez, so that he, his wife Lis Cuesta, and several representatives of the Cuban government accompany the president in the civic-military parade for the Bicentennial of Independence. Cuba will speak to the Mexican government and the people of Mexico—the two countries have been sister nations since the founding days of the revolutions of both countries.

Tomorrow, Mexico will host the nations that make up the CELAC that is full of hope. The sixth summit of this organization of regional integration, which was forged in another Mexican summit in Cancún in 2010, promises novelties that aim to strengthen the group essential to the dreams of Latin America.

These are facts that will be remembered in history when these years pass, but it is already moving to the root of the soul, the dazzling and brave way in which Mexico, free today as always and more sovereign every time, defies pressures that we could not even imagine, and embraces the sister nations of Latin America.

(1) Ana Lila Downs Sánchez, better known as Lila Downs, is a Mexican singer, songwriter, producer, actress, and anthropologist. In addition to singing in Spanish and English, she also performs in various native languages ​​of her country, such as Mixteco and Zapoteco, as well as Mayan, Purépecha, and Náhuatl.

Arleen Rodríguez Derivet is a Cuban journalist, conductor of the program Mesa Redonda, and has a show on Telesur.

Featured image: The President of Mexico, Andrés Manuel López Obrador, waves the national flag during the traditional Shout from the balcony of the National Palace, starting the independence celebrations, in Mexico City, on September 15, 2021. Photo: Fernando Llano