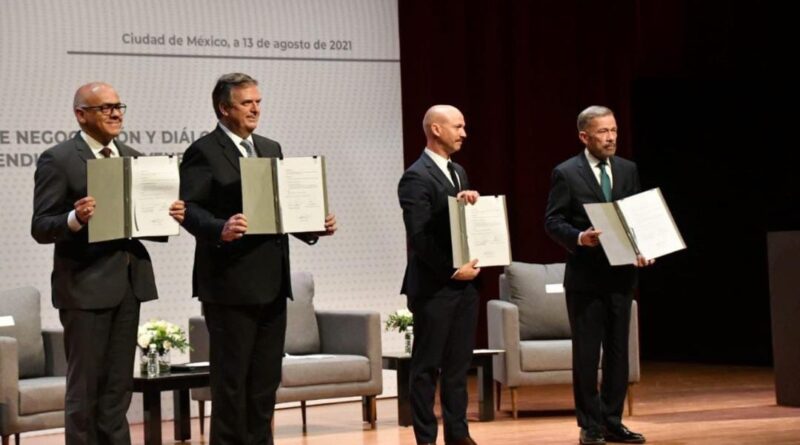 The plenipotentiary envoy of the Venezuelan government for the peace talks in Mexico, Jorge Rodríguez, announced this Monday, August 16, that on September 3 negotiations between the government and the extreme-right opposition will resume. This was stated by Rodríguez during a press conference with international media, alongside the President of the Republic, Nicolás Maduro, while highlighting that it was agreed that they will not only meet in Mexico, but also in Venezuela.

Rodríguez emphasized that the meeting in Mexico was the result of six months of talks. “We issued a memorandum that was the starting point for the peace dialogue, which implies, among other things, electoral and political guarantees, and respect for the constitutional rule of law. After that, 14 meetings were held between the head of the delegation of the unitary platform, the government, and representatives of Norway.”

Rodríguez said that he hopes that partial decisions will be made and a general consensus will be built through the dialogue process. “The dialogue between the Venezuelan government and the extremist sectors of the right is already successful,” he said. “Here are the signatures for history.”

In this regard, the Venezuelan head of state, Nicolás Maduro, added that what was agreed in the memorandum of understanding in Mexico will be taken to a plenary session in the National Assembly (AN) to give it legal force and take it to the official gazette.

RELATED CONTENT: President Maduro on Mexico Talks: We Should Resume Diplomatic Relations with the US

Maduro assured that this new negotiation process will give way to a new political era in Venezuela: “We have the elections of governors and mayors before us, so political processes are impending. Our expectation is that new political actors will be elected to help improve the economy and national politics, and political performance depends a lot on that.”

The Venezuelan President welcomed the fact that the former mayor of the Sucre municipality Carlos Ocariz, an extremist opposition leader, recognizes the National Electoral Council and has decided to participate in the November 21 elections.

He specified that his government will continue to insist on meeting with all opposition sectors and promoting dialogue with the United States. “We are going to do everything possible so that this time they do not ‘kick the table,’ or break the dialogue agreements,” Maduro said.

“We are building a new dynamic, a new direction, and Venezuela will support the strengthening of CELAC as our response to the common problems of our region, as a response to the construction of a powerful bloc that the liberator Simón Bolívar raised in the Congress of Panama,” he added.

President Maduro stressed the importance of advancing united alongside of the various anti-neoliberal movements and projects that seek social justice, since these are in constant conflict against the neoliberal models that impoverish the region. “In the diversity of Latin America and the Caribbean we are finding the way of unity,” he said.

“Latin America and the Caribbean is a region in permanent dispute between original, popular, nationalist, and progressive projects for change—revolutionary projects with all their diversity against oligarchic, imperialist projects,” Maduro elaborated. “A dispute between the looting and impoverishing neoliberalism of our lands, and the social justice projects that arise in each country, with their own leaderships and terms… In Venezuela it is called Bolivarian socialism, the Bolivarian Revolution of the 21st century.”

The head of state praised the fact that the path of unity is being resumed through CELAC, under the pro tempore presidency of Mexico.

Likewise, he advised “the reactivation of the joint councils of ministers, in order to respond to the issues of climate change, economic development, and regional unity in a single bloc, to respond to educational, cultural, migration issues, to all Latin American and Caribbean issues, from our organization.”

Featured image: Parties in the Mexico Talks showing their copy of the signed memoranda opening the new dialogue with Venezuela’s extreme-right opposition. Photo courtesy of Telesur.