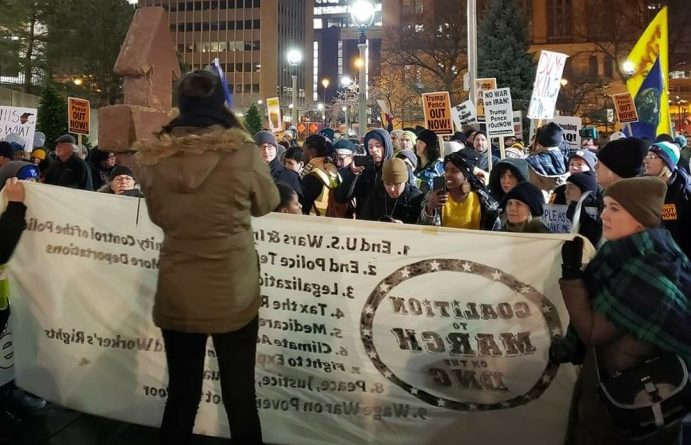 Milwaukee, WI – As President Donald Trump took the stage at the UW-Milwaukee Panthers Arena on the evening of January 14, over 2000 rallied and marched against his visit and his reactionary agenda. The action was led by the Coalition to March on the Democratic National Convention, a growing group of nearly 20 organizations that has come together to march and protest at the Democratic Convention which will be in Milwaukee this summer.

Omar Flores, a leader with the coalition, served as the press representative for the action and also spoke at the rally before the mass march. Afterward, he explained why the Coalition to March on the DNC organized the demonstration against Trump.

“Such a small part of the democratic process occurs in the voting booth. At the end of the day, the only power that matters is people power,” Flores said. “We’re out here today to build the people’s movements. That’s how we fight back and win against Trump.”

The action began with a rally of hundreds at Dontre Hamilton (Red Arrow) Park where a couple speakers from key sponsoring organizations discussed the importance of coming together in solidarity against Trump.

“Trump is the ruling class with their mask torn off. He is the most honest expression of our class enemy in all their infamy,” Kellie Lutz, a member of Freedom Road Socialist Organization, said. “He is an enemy of working class and oppressed people everywhere, and he must be defeated!”

As the demonstrators left the park and headed towards the arena, their numbers began to swell with droves of supporters joining their march. The Milwaukee Police Department descended on the crowd, forcing them to march on the sidewalk. One officer almost hit a protester and a small child with his bike while attempting to contain the crowd. Marshals present helped to ensure the safety and security of the participants, both from the police and from counter-protesters.

RELATED CONTENT: US: Thousands Take to Streets in More Than 70 Cities Across US to Protest Trump’s “Reckless Acts of War” Against Iran (+UK)

Once outside the arena, thousands joined chants together, drowning out the small number of Trump supporters present. Christine Neumann-Ortiz, executive director of Voces de la Frontera, a major immigrant rights organization, spoke about the importance of united front against Trump and his administration, which has continued to attack and illegally imprison immigrants.

Lauryn Cross, a young activist from the Youth Climate Action Team, spoke about fighting against the destruction Trump and the rich have caused for our planet. She was joined by many other young fighters, including those of UW-Parkside Students for a Democratic Society.

“Seeing so many people mobilized for one event in Milwaukee gave me and many others a glimpse into what injustices are possible to use as a principle for unity here in this city,” Cross said.

Although the rally officially ended around 7 p.m., numbers remained strong long afterwards, so much so that the Milwaukee Police Department deployed over 100 riot police to intimate those who remained.

With this major success, the Coalition to March on the DNC proceeds with a full head of steam toward July 13, the first day of the convention. Their first major battle is with the city of Milwaukee over the granting of a permit for their planned demonstration. Meetings are held once a month, 5 p.m. on the second Friday.