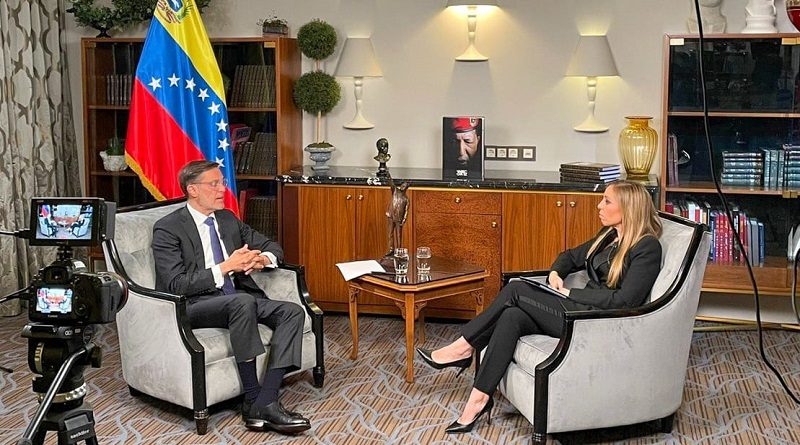 Minister of Foreign Affairs Felix Plasencia during an interview for RT. Photo: VTV.

The Minister of Foreign Affairs of Venezuela, Félix Plasencia, stressed that even in the case that Alex Saab is convicted, Venezuela will continue to insist on his release. Plasencia described the process carried out by the United States as a “kidnapping.”

“If Alex Saab is convicted, we will continue to insist that he be released, because it is an illegal process,” Plasencia said. “There are instances and opportunities to continue legally defending the rights of the Venezuelan representative at this juncture of kidnapping and illegal arrest.” The minister made the statements during an interview with the Russian news network, RT:

RT: Have those dialogues that were taking place with the opposition been stalled after the extradition of Alez Saab?

Plasencia: “That would be a very passive view. Dialogue with all Venezuelans is always active in Venezuela, to achieve peace and tranquility. The kidnapping of Ambassador Alex Saab, a diplomat who is also a member of the Dialogue Table, is a circumstance that affects and has a consequence in the dynamics of the dialogue, but that does not mean that the process of dialogue with Venezuelans to build solutions have been dismantled.”

RELATED CONTENT: The Prosecution of Alex Saab: The Latest Attempt to Strangle Venezuela

Venezuela respects sovereignty of other nations
The government of Venezuelan President, Nicolás Maduro, “aims at the best relations with all members of the international community, there are no exceptions for that,” Plasencia said.

Venezuela’s Foreign Affairs Minister is on an official visit to Russia. Plasencia stressed that the Venezuelan government recognizes and respects the elections held in other nations. “President Nicolás Maduro congratulated President Biden for his victory in the United States, and has always said that he is open to a meeting with representatives of that country, and with all member countries of the international community.”

The senior official assured that Venezuela “continues to be today a fundamental leader in the region, with a commitment to peace, multilateralism, and the search for understanding with the United States.”

Plasencia said that during his visit to Russia he spoke on behalf of the rest of the Latin American nations because “Venezuela is a natural gateway” to South America.

When asked about the “sanctions” imposed by the United States on Venezuelan officials, the foreign minister described them as “coercive measures” applied by the US government to generate pressure and encourage the departure of President Nicolás Maduro.

However, the foreign minister recalled that these sanctions “affect the people of Venezuela and have not succeeded in overthrowing the government of Maduro, which has emerged stronger after this process of several years.”

The minister explained that another objective of these sanctions is the strangulation of the oil industry. However, the coercive measures actually made it possible for Venezuela to diversify its industry beyond its conventional crude oil production, the main market of which was the United States.

“Hopefully there is a responsible government in the US that realizes that imposing coercive measures against the people of Venezuela is the wrong route, which only brings discredit, lack of recognition, and shame on the US population,” said Plasencia.

“We both defend sovereignty,” he added. “We are very important oil producers, we have large reserves of natural gas, and we are aligned on a defensive path for the world’s energy markets, which will always be a reason for rapprochement, meeting, and work.”