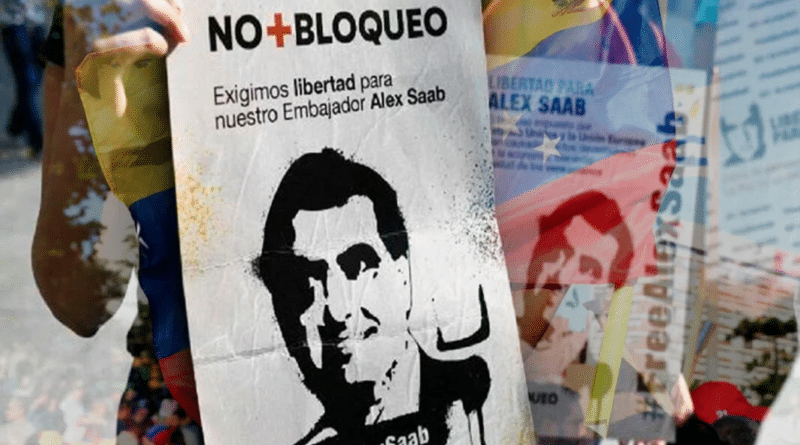 A businessman and diplomat now sits in a US Federal Detention Facility in Miami awaiting trial, part of the latest move in continuous US efforts to destabilize South America.

Writing for the Wall Street Journal on May 24, 2018 Anatoly Kurmanaev wrote: “When I arrived in Venezuela in 2013, the party was still on. Oil was fetching $100 a barrel, and Mr. Maduro’s populist government was showering petrodollars on everyone. The Caracas skyline was dotted with grandiose construction projects, steakhouses were buying vintage Scotch by the container load and hotels had to be reserved weeks in advance.”

The cliché right-wing narrative that Venezuela has been on the brink of starvation ever since it adopted the godless totalitarian ideology of Communism couldn’t be further from the truth. When Hugo Chávez was elected in 1998, Venezuela only had 12 public universities. Now it has 32. The rate of poverty was cut in half between 1995 and 2009. Adult Illiteracy, long a plague on working class communities throughout the country, has been wiped out. The Housing Missions have provided affordable, high quality modern housing to millions of people.

The widely highlighted problems that have hit Venezuela, most especially since 2014, are a direct effort of foreign meddling in their political affairs. Banks throughout the world have frozen or seized the assets of the Venezuelan state. US sanctions have made it nearly impossible for Venezuela to import needed products such as food and medical supplies. The Westminster Foundation for Democracy, a UK foundation has spent over $345,000 since 2016 on “funding journalism” to work against the Venezuelan government.

Rex Tillerson, the CEO of Exxon-Mobile, is reported by the Washington Post to have a personal vendetta against the socialist government after Chávez stood up to him, asserting domestic control over Venezuela’s oil resources.

A number of attempts to violently overthrow the Venezuelan government with a military coup have been linked to the United States, with ex-Green Berets and US-linked military contractors involved. On August 14, 2020 a gathering where Venezuelan President Maduro was speaking was targeted by a drone.

Yet, despite economic warfare, internal subversion and military threat the Venezuelan government remains solidly intact. Why? The military, trained in Cuba and ideologically loyal to Marxism, stands behind Maduro. A network of communes, collectivos and Bolivarian community militias also enforce the governments policies on a local level. A solid core of Venezuelan people from the country’s urban centers and working class neighborhood can recall the days before healthcare was widely available and millions of Venezuelans had no running water or electricity. They are committed to preventing a return of neoliberalism and backing up the project of construction led by the United Socialist Party.

The latest attempt to strangle the Venezuelan state has come in the form of extraditing Alex Saab, a Colombian businessman and Venezuelan diplomat. Saab was on his way to Iran on June 12, 2020. He was pulled off his plane at the Amilcal Cabral International Airport in Cape Varde’s island of Sal. He was held in Cape Verde, often in inhuman conditions, until he was extradited on October 16.

“The Key” for a “Loose Alliance of Nations”
Saab was arraigned on Monday in Miami’s Federal Court. The charges against him are that he allegedly worked to circumvent US sanctions to help Venezuela’s housing mission program. Forbes magazine described the charges against Saab writing: “For the US, Saab is the key that unlocks the Venezuelan monetary mystery—that is, how a country facing sanctions from the US, the UK and the European Union—is still able to export things like gold and oil.” The article goes on to describe how Dev Odedra, an “anti-money laundering expert,” spoke of Alex Saab being “an instrumental player” in the loose alliance of nations like Venezuela and Iran, both living under US sanctions, countries that are in need of mutual trade in gold, oil and gas to “prop up the regime(s) against the backdrop of imposed sanctions.”

The detention and prosecution of Alex Saab in Cape Verde violated international treaties and norms, as he had a diplomatic passport and should have been granted immunity as is standard for international envoys. UN organizations and human rights groups throughout the planet have raised their voices against this blatant act of aggression from the United States.

Many are watching the case closely because the implications are massive. Prominent lawyer and legal expert Nancy Hollander explained: “The US takes the position that anyone who manages to get past the sanctions is violating the sanctions, which makes the sanctions worldwide.”

If Alex Saab is convicted and imprisoned in the United States, the result is putting almost everyone who does business with Iran, Russia, Cuba or any of the 29 countries under US sanctions at risk of abduction and prosecution. The results for millions of people in terms of access to medical care, food, supplies and other necessities of life could be detrimental. Even Forbes admits that “for many in Venezuela, this is not criminal—Saab is a hero, and his efforts overseas are the actions of a man trying to feed and house the hungry and homeless.”

Many voices around the world have demanded that Saab be immediately released. His wife fears for his safety, and on October 17 read the following statement to the press on behalf of her husband: “I am not suicidal. Just in case they murder me and say that I committed suicide, something I would never do.”

Many across the planet are paying close attention to what happens to Alex Saab as he remains locked up in Miami, awaiting trial.