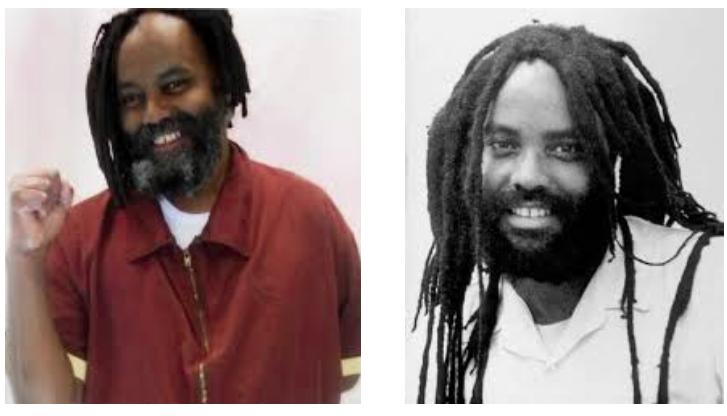 From the minute Mumia picked up a microphone and a pen at the age of 14, Philadelphia’s notoriously racist police department has been seeking to silence him. Just look at the FBI files, documenting that the Philadelphia PD Civil Disobedience Unit Red Squad trailed him – and the Police Chief Frank Rizzo targeted him, feeding his name to the FBI to put him on the “security index.” Mumia was literally covering community events and rallies and writing for the Black Panther Party newspaper, all this while he was still in his teens!

Mumia was a daily radio reporter for WHYY and NPR in the early ‘80s, drawing both acclaim and the notice of Frank Rizzo and the Philadelphia Police for his award winning reporting.

His trial after his arrest and conviction for the first degree murder of Philadelphia Police Officer Daniel Faulkner on Dec. 13, 1981, has been acknowledged by Amnesty International and Nelson Mandela as a travesty.

During the 1995 PCRA (Post Conviction Relief Act) hearings, 13 years after Mumia’s questionable murder conviction, a Philadelphia police officer was heard by a New York Times reporter outside the courtroom saying, “We should have executed him that night.”

Remember, it was Philly cops who shot Mumia, Philly cops who brutally beat him at the scene, in the police wagon and on the floor of the Jefferson Hospital emergency room entrance.

Joe McGill, the prosecutor on Mumia’s case, and Ed Rendell, the district attorney at the time, worked closely with the police to frame and convict Mumia for the Dec. 9, 1981, murder of Officer Faulkner.

In 2020, a new hearing in Philadelphia Common Pleas Court could be, and should be, free from bias. Everyone knows that Mumia’s trial judge in 1981-1982 was s stone cold racist. A current sitting homicide judge on the Common Pleas Court bench has commented that Albert Sabo was “the most racist and sexist judge I have ever met.”

Here is information that has been suppressed and buried for decades and now could be available for the first time during a new trial:

Did DA Joe McGill pay off witnesses with favors and cash?
Did McGill allow the cabbie with a suspended license to keep driving? Photos of the crime scene by the Philadelphia Bulletin prove the cab driver’s car was literally not at the scene.
Did Joe McGill illegally remove Black jurors because of their race?
Did Joe McGill track and fix the outstanding cases of other key witnesses?
Did the DA’s office for 37 years withhold and suppress critical information from Mumia’s criminal defense team?
Did judge Albert Sabo state, “I am going to help them fry the n***er,” in front of Judge Richard Klein and court clerk Terry Maurer Carter?
Did Philadelphia Police Commander Alfonso Giordano, the highest ranking officer on the scene of Officer Faulkner’s murder on Dec. 9, 1981, falsely state that Mumia confessed while he was beating him in the police van? At the time, Giordano was under federal scrutiny for running gambling, extortion and payoffs and thus not used as a trial witness.

He testified at pretrial hearings but was not “available” at trial. He retired with full pay the day after Mumia was found guilty. Soon thereafter he pleaded guilty to tax evasion for the bribes taken from illegal gambling in East Division; 29 officers were convicted in just that scandal alone.

A few months ago, I got a chance to speak with Maureen Faulkner. I asked her what did she think was going to happen next in Mumia’s case?

She replied: “You have to go to Prison Radio’s website and listen. Judith Ritter, Mumia’s lawyer, really thinks they have a chance.”

Maureen paused, then continued. She had to admit: “We are in a really hard spot. There is not much we can do, the way it is going … We have to fight to keep Mumia in prison as long as possible.”

Finally the tides are turning. Justice is palpable.

While Maureen Faulkner, widow of Daniel Faulkner, is being put forward as the face of the opposition in recent court proceedings, the real players behind the scenes are the Fraternal Order of Police. And they are worried. There is a lot of self-interest on the part of the 6,500-member Philadelphia police union in toppling Larry Krasner, the popular new DA with an anti-corruption agenda.

Early this fall, in a groundbreaking development, Krasner filed a brief in Superior Court agreeing that a new evidentiary hearing should be held in Mumia’s case by the Philadelphia Common Pleas Court. “The Commonwealth does not oppose defendant’s motion for a remand to the PCRA court for defendant to present newly-discovered evidence.”

This PCRA hearing would evaluate the evidence found in the six previously undisclosed banker boxes from Storage Room 17 that Larry Krasner found after taking office and turned over to the defense. Maureen Faulkner tried to file an objection to the removal by Krasner’s office. But just last week, her pro se application for intervention in the Superior Court appeal was denied.

Fast forward to October of 2019, “Mumia Abu-Jamal is just one step away from freedom,” Maureen announced at her press conference at the DA’s office at 3 Penn Square in Philadelphia.

Things are changing. Grassroots organizing popularly elected progressive District Attorney Larry Krasner who is willing to hold the police and former district attorneys accountable. It has been 37 years, and we are closer to justice than we have been since the 1995 PCRA hearing. The courts may be slow to follow, but there is no way to go back. We are on the path to freedom.

You have been there, making it happen, each and every single step. Thank you.

We all must remember that the Philadelphia police have been violent and racist and corrupt for decades. They have a lot to lose if Mumia wins – because when Mumia wins, the forces that support Black dignity and freedom are winning.

Let us not misunderstand the depth of racism throughout the police department in Philadelphia. Here is a picture of brand new Acting Police Chief Christine Coulter. Here she is wearing an LAPD T-shirt mocking the beating of Rodney King: “LAPD: We treat you like a King.” She did not resign when this photo surfaced.

John McNesby, the Fraternal Order of Police (FOP) Lodge 5 president, is deeply invested in continuing the brutal power that the Philly police department enjoyed in the past. At the FOP Lodge 5 event in April, he tells his brother officers: “Krasner is going after cops instead of keeping this city safe … We have so many officers on the do-not-call list, we could invade Cuba.” This was a riff on the line by former Mayor and Police Chief Frank Rizzo claiming, “We could invade Cuba and win.” The “do not call list” includes officers designated by the DA’s office as not available to testify at trial because they have been caught by the courts “test-a-lying” or they have been indicted.

The scandals regarding police corruption are splashed across the Philadelphia Inquirer’s front page each and every single week. This week another African-American man was exonerated after proving police falsification of evidence. Willie Veasy’s return to his family after 27 years of bondage was the 10th so far this year.

Mumia Abu-Jamal will follow Willie Veasey out of imprisonment. But only because thousands of you have stood by him and committed to this fight for justice. We still have work to do, we still need every one of you to make sure that justice is done and Mumia comes home.

Join all of us. It is time to move this forward towards justice and freedom and bring Mumia home.

Cuando luchamos ganamos! When we fight, we win!