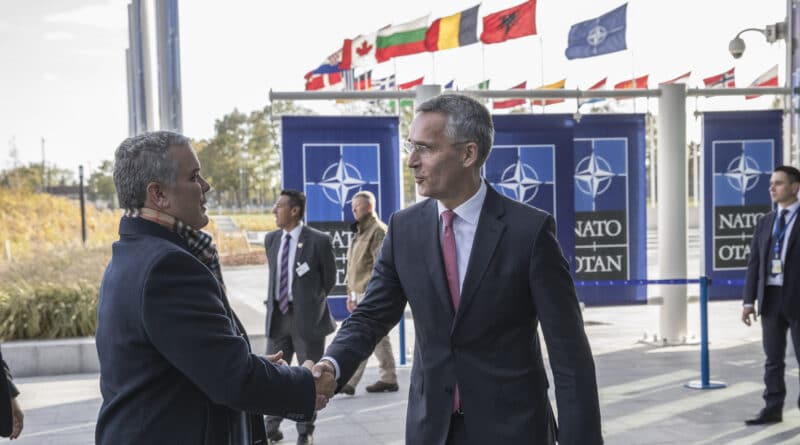 International analysts are often, and understandably, asked whether there will be a change in U.S. foreign policy depending on whether a Republican or Democratic president rules the White House. Since, for a Marxist, it is always a good idea to flee from Manichaeism and look at the concrete situation in its historically determined class relations, to point out that, at the international level, the essence of U.S. foreign policy presents no discontinuities, it is not an ideological position-taking.

“Everything changes so that nothing changes” is a scheme that fits well with U.S. strategy in the world. Whether wrapped in open-field Trumpist rhetoric or a more persuasive Biden-style “multilateralism,” the foundational idea of armed supremacy remains the basis of the American political model in foreign policy. A paradigm that feeds and feeds the interests of the military industrial complex, sustained, relaunched and updated by its ideological engines, schools of thought and media.

On this basis, the US believes itself to be the gendarme of the world, legitimized in an arms race to protect itself from eternal danger, both within and in its own areas of influence, which are therefore replete with military bases with stars and stripes. An apparatus that needs, from time to time, to be put to the test, to demonstrate to allies-subjects that it is worth paying to guarantee peace through the vicarious prestige of that armed supremacy.

On this basis, when the Soviet Union disappeared and thus the comparison with an economic model and a model of thought which placed peace with social justice at the center and which could thus also inspire the pacifist demonstrations against the aggression in Vietnam, the American war adventures, moved by internal political motives, have consolidated the consensus of the elites around the concept of American “democracy” as the vaccine of the world: Leveraging on the double key of military and economic supremacy, but if necessary also on a supposed moral and cultural superiority capable of coagulating consonant interests globally.

This is a concept increasingly questioned by the growth of a multicentric and multipolar world, crossed by a globalization that intertwines interests between divergent poles, as can be seen in Latin America where China has strong trade relations even with extreme right-wing governments such as Brazil. On the other hand, it can be recalled how the technical-scientific cooperation pact with Argentina, which resulted in the establishment of a radar station in Patagonia, signed in 2014 by then President Cristina Kirchner and then ratified by businessman Mauricio Macri, Trump’s successor in the presidency and friend, dates back to 1980, when the anti-communist military dictatorship ruled.

In any case, if a year after the assault on the Capitol, the structural failures of American bourgeois democracy have revealed the crisis of American hegemony also in terms of its attractiveness, the United States remains the first world power, well supported by an alliance, that of NATO, with new plans for expansion.

We are seeing this with the new conflict in Ukraine and with the failure of the meetings that took place in Brussels between Russia and NATO. The Atlantic Alliance, which is preparing the June summit in Madrid, Spain, has rejected all Moscow’s proposals to contain the eastward expansion of American supremacy, which would be dangerously enlarged by the accession of Ukraine, the last nation to request it. In thirty years, NATO’s membership has grown from 16 to 30 countries, many of which belonged to the former Warsaw Pact.

The allies of these 30 countries are now deployed along the Russian borders, but Putin is once again accused by the thundering Western propaganda. The media, however, are careful to disseminate the contents of the dialogue platform and the draft treaty, proposed in December by Moscow and rejected by Washington. All the points advanced by Russian diplomacy focused on the peaceful settlement of disputes, on the commitment of the two sides not to undertake actions harmful to security, on ensuring compliance with the principles of the UN Charter of all military organizations and alliances to which Russia and the United States adhere, and not to use the territories of other states to organize or launch an armed attack against either side.

Russia also called on the United States not to establish military bases on the territory of other states of the former Soviet Union that are not yet NATO members and to prevent further accession of former Soviet states to NATO. That being the case, Russian diplomacy said, “if there is not at least some room for flexibility on serious issues,” Moscow “sees no reason” for further meetings with the United States and its allies.

The Atlantic Alliance said it remains available for further meetings because “the risk of an armed conflict in Europe is very real and must be prevented,” and in the meantime has moved all European pawns to support the thesis that Putin would like to invade Ukraine and would use gas, through the state-owned Gazprom, as a political weapon in ongoing disputes with Western countries.

“The risk of a war in the Osce area is greater than in the last thirty years,” said the current chairman of the Organization for Cooperation and Security in Europe, Polish Foreign Minister Zbigniew Rau, at the opening of the OSCE Council, which the made up of 57 countries, including the United States, Ukraine and Russia. “There will be no negotiations on Ukraine under military pressure from Russia,” EU diplomacy chief Josep Borrell said, referring to Russian troops present in Crimea.

Meanwhile, a group of 25 Democratic senators, led by Bob Menendez, have introduced a bill on “Defense of Ukraine’s sovereignty” in case of attack by Russia. The bill includes sanctions against Putin, the prime minister, military officers and banking executives. Sanctions against a head of state – the Kremlin spokesman commented – are a measure equivalent to a severance of relations, “they would exceed a limit”.

US Senator Menendez, who chairs the US Senate Foreign Relations Committee, is known for leading campaigns against Cuba, Venezuela and Nicaragua. In 2019 he pushed for then Secretary of State Mike Pompeo to apply sanctions against Cuba, Venezuela, Nicaragua for their relations with Russia. In December 2021, he had Biden sign the Renacer Act, to toughen sanctions on Nicaragua, “guilty” of organizing the November 7, 2021 presidential elections, again won by the Daniel Ortega-Rosario Murillo presidential ticket.

The senator also worked for the unilateral coercive measures to be adopted by the European partners of the United States and Canada and to be accompanied by other sanctions of an economic nature, aimed at reviewing the loans granted to the Nicaraguan government by international organizations and reconsidering Nicaragua’s participation in the free trade agreement that links several Central American countries to the United States, the first world power and first market for Nicaraguan exports.

The elections in Nicaragua and the participation of Latin American countries in the inauguration of President Ortega were also the subject of friction within Celac, the Community of Latin American and Caribbean States that includes 33 American countries (32 since the withdrawal of Bolsonaro’s Brazil), except for the United States and Canada. On January 7, the summit of the organization focused on the resumption of continental integration, despite the differences of criteria that move the right-wing governments subordinated to the US, was held in Buenos Aires and assigned the pro tempore presidency to Argentina.

Nicaragua’s initial opposition to the Argentine candidacy has disappeared thanks to the mediation of Cuba and Venezuela. The Sandinista government had protested because, on November 8, the Argentine had issued a communiqué calling for a boycott of the “fraudulent elections” in Managua and, on November 13, had then approved a draft resolution in the Organization of American States (OAS), sought by the United States and 8 other countries. Then, however, the government of Alberto Fernandez decided to send back to Managua its ambassador, who was also present at Ortega’s inauguration, and the conflict ended.

The Celac summit, which again raised its voice against illegal unilateral coercive measures imposed by imperialism, also denounced how some of the countries present, Colombia in the first place, were there on behalf of third parties, that is, on behalf of the United States. Colombia, which abounds in U.S. military bases, joined NATO in 2018 as a “global partner”, effectively breaking the declaration issued in Havana in 2014 by the continental body, with which Celac declared itself a “zone of peace”. A purpose also reiterated at the Buenos Aires summit.

By joining the Atlantic Alliance, the Colombian government (before with Manuel Santos and now with Iván Duque) has paved the way for any NATO maneuver both from its coasts in the Pacific and Atlantic oceans, as well as from the borders with Venezuela, Brazil, Ecuador and Panama. At the Buenos Aires summit, Colombia’s representative defended the role of the OAS and criticized the “dictatorships” of Ortega and Maduro. “We believe that multilateralism offers the best options,” she said, referring to U.S. policies. Then, in shameful silence on the massacres perpetuated in the shadow of the Colombian narco-government, she reiterated the importance of respecting human rights in the region and maintaining good relations with the United States and Canada.

Venezuela, through Foreign Minister Felix Plasencia, reiterated the proposal to create a general secretariat of Celac “to give even more impetus to the exchange between all the countries of the region”, and supported Argentina’s claim against the International Monetary Fund to get rid of the debt contracted by the previous Macri government. The summit proposed 15 points to work on in the coming months. These include the post-pandemic economy, space cooperation, educational integration, institutional strengthening and the fight against corruption.

“Let’s wipe the slate clean and open a new file, and let’s move forward dear Nicaraguan brothers, building peace to fight poverty, building peace so that there are roads,” Daniel Ortega told Managua upon assuming his fifth term as president, after being elected with 75% of the vote. One more step towards strengthening the Bolivarian Alliance for the Peoples of our America (Alba-Tcp) and Petrocaribe, within the framework of the alliances that make up a multicentric and multipolar world.