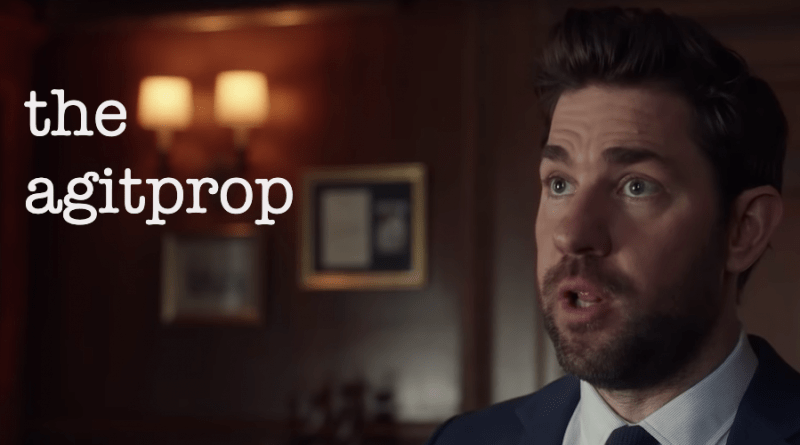 “No matter how cynical you might be about propagandistic American media, you are not prepared for how much watching this trailer is like snorting 100% pure John Bolton.”

A new trailer out Thursday for Amazon’s television series “Jack Ryan” featuring the titular hero racing against time to stop Venezuela from obtaining a nuclear weapon was widely ridiculed for its jingoistic nature and reliance on conspiracist tropes, with critics deriding the plotline of the new season of the nationalist series.

“Stop what you’re doing and watch this, it is jaw-dropping,” tweeted “Chapo Trap House” podcast co-host Will Menaker.

Stop what you’re doing and watch this, it is jaw-dropping https://t.co/eiUtkJv3FX

“I would truly like to know more about who wrote and produced this series,” Menaker added.

As Common Dreams has reported, President Donald Trump’s administration spent much of the first half of 2019 expending a great amount of diplomatic pressure in hopes of enacting a coup against Venezuelan President Nicolas Maduro. The White House promoted the self-declared presidency of Juan Guaió and punished Venezuela with sanctions and an embargo. The Guaidó effort appears to be over, reportedly due in part to Trump’s short attention span.

Historian Gary Alexander pointed to the president’s national security advisor John Bolton, who endorses a bellicose foreign policy toward nearly every country in the world, as the ideological godfather of this season of “Jack Ryan.”

“No matter how cynical you might be about propagandistic American media, you are not prepared for how much watching this trailer is like snorting 100% pure John Bolton,” said Alexander.

Central to the plot is the idea that Venezuela, once armed with nuclear weapons, would bomb the U.S.—a country with enough firepower to use a fraction of its weapons to flatten the Latin American country.

“A nuclear Venezuela you will not hear about in the news,” Krasinski says at one point in the trailer, “’cause we’ll already be dead.”

Abby Martin, host and creator of the show Empire Files, called out the show’s star John Krasinski for “propelling such absurd war propaganda on behalf of the Trump administration.”

You should be ashamed of yourself for propelling such absurd war propaganda on behalf of the Trump administration, @johnkrasinski https://t.co/2vhQJmoaV1

“Hollywood producers may identify as liberals,” said Berry, “but their ‘products’ keep scaring us into neocon fantasies of war.”

Adam Johnson, co-host of the podcast “Citations Needed,” mocked the series’ premise and pointed out that the propagandization of the show was the kind of media that U.S. news networks regularly accuse authoritarian regimes of forcing on their people.

“A nuclear Venezuela!” Johnson said in a tongue-in-cheek tweet. “Man I’m so glad we don’t have state media propagandizing us in this country.”

The series relies on tropes that depict the current Venezuelan government as an irrational actor—a presumption that was rejected by Splinter’s Jack Mirkinson.

“I think Venezuela probably wants a stable currency and a promise that America won’t invade it before it wants a nuclear weapon,” wrote Mirkinson, “but who am I to quibble with this kind of propaganda?”