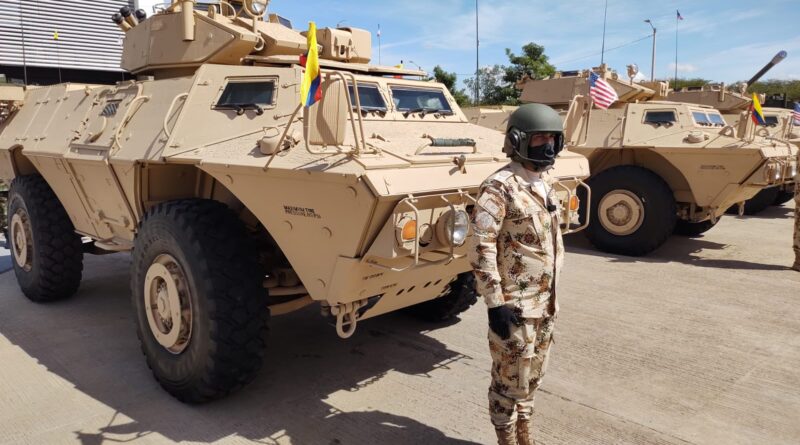 Colombian Defense Minister, Diego Molano, received from the US Ambassador to Colombia, Phillip Goldberg, the keys to 20 armored vehicles of model ASV M1117 Guardian which, the minister assured, will be deployed at Colombia’s border with Venezuela.

These 20 vehicles make up the first batch of 145 military vehicles that Washington is donating to the Colombian army.

“This effort allows us to have more equipped troops, soldiers who fulfill their mission to face threats,” said Molano at the Buenavista Military Cantonment in La Guajira, about 30 kilometers from the border with Venezuela’s Zulia state, in a clear act of provocation that is not new in the long trail of aggression from the US and Colombia towards Venezuela.

This action is the latest in the intense military cooperation between the White House and the Palace of Nariño, that Caracas has pointed out as interference and provocation, with “dark interests as a backdrop.”

An international analyst said to Orinoco Tribune that “no media attention is raised when these military provocations come from the US and Colombia, but when a couple of Russian bombardiers land in Caracas, 800 kilometers from the border with Colombia, the media alarm is more than evident and strident. We are talking here about 145 military vehicles; it is not a visit of two Russian bombardiers, and it will certainly get a reciprocal response from Venezuelan military and its powerful allies, China and Russia.”

The US government just held a ceremony with the Colombian narco-regime's military, right near the border with Venezuela.

The US delivered Colombia 20 armored vehicles.

This is a clear threat to Venezuela. These threats happen often, but get almost no mainstream media coverage https://t.co/hrEQOUwntW

Renowned US journalist Ben Norton wrote on Twitter: “The US government just held a ceremony with the Colombian narco-regime’s military, right near the border with Venezuela. The US delivered Colombia 20 armored vehicles. This is a clear threat to Venezuela. These threats happen often, but get almost no mainstream media coverage.”

Moreover, in just six months the US Southern Command (SOUTHCOM) visited Colombia thrice; two visits were by Admiral Craig Faller, who was even in Puerto Carreño, very close to Venezuela, and the other on November 18 by General Laura Richardson, two days after which Molano announced the deployment of drones and sensors at the Colombia-Venezuela border.

In addition, on October 20, the US Secretary of State, Antony Blinken met the Colombian President Iván Duque.

The Colombian defense minister claimed that the 145 armored and artillery vehicles will be deployed in La Guajira, border with Zulia; Norte de Santander, border with Táchira; and Arauca, border with Apure, to strengthen security and defense, and will carry out maneuvers and mobility tasks.

Featured image: Some of the US military armored vehicles donated by the US to Colombia, and deployed a few kilometers from the border with Venezuela. Photo: Twitter / @FuerzasMilCol