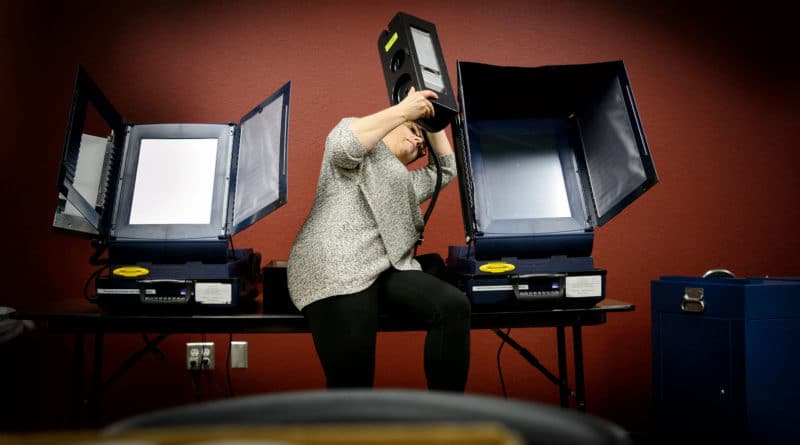 As states and local voting jurisdictions around the country work to upgrade voting systems in the wake of the 2016 Russian election interference operations, most election security experts have urged the adoption of paper ballots.

While voting on paper might call to mind wielding a pencil or pen to fill a bubble, check a box, or complete an arrow, election officials in several states have purchased systems that use paper but where voters continue make selections on a touch-screen. These machines, known as ballot marking devices, or BMDs, then print out the voter’s completed, marked ballot to be tallied by optical scanners. The machine-produced ballots can be preserved, providing a physical record to verify a result or conduct a recount.

Opponents warn the machines perpetuate some of the same risks inherent to paperless systems.

In theory, voters can review the ballot printed by the machine and catch any discrepancy between their intentions and the paper record. But a new study from researchers at the University of Michigan based on a carefully designed mock-election found that the majority of voters don’t review their ballots before handing them over to be scanned, and that a shockingly low number of voters reported errors to poll workers, even though the researchers had programed the machines to deliberately introduce one on every ballot. Based on the experience, the researchers warn that “error detection and reporting rates are dangerously low,” indicating that not only would it usually go unnoticed if such machines, either through error or manipulation, printed mismarked ballots, but that the paper record they produced would fail to document any evidence of a discrepancy.

The study will likely add fuel to a contentious debate in the election security community over the technology. While backers of BMDs argue they can speed up voting, help people with disabilities vote confidentially and without assistance, and prevent the incomplete and stray marks that people commonly make using pens and pencils, opponents warn they perpetuate some of the same risks inherent to paperless systems while giving a false sense of confidence.

BMDs are already in use in hundreds of voting jurisdictions across the country. South Carolina bought 13,500 last summer, and officials in Texas and Georgia have also made recent purchases. Marci Andino, the executive director of the South Carolina State Election Commission, boasted last year that the systems would allow for auditing of paper ballots, which “will go a long way in providing voters and election officials the assurance that every vote is counted just as the voter intended.”

Two influential board members of the prominent election security watchdog group Verified Voting resigned their positions late last year over the BMD dispute, accusing the organization of glossing over concerns about the systems’ security issues. After the resignations, Verified Voting issued a statement recommending their use “be minimized,” suggesting that polling places might only make them available to certain voters. “The trustworthiness of an election conducted using BMDs depends critically on how many voters actually verify their ballots, and how carefully they do it,” the statement read, adding that voters who use the machines should be specifically reminded to review their ballots.

To conduct their 2019 experiment, the Michigan researchers set up mock polling places at two public libraries in Ann Arbor, inviting patrons to participate in a “study about a new kind of election technology.” The researchers developed ballots featuring real candidates from the city’s 2018 elections, but programmed the machines to randomly manipulate the voter’s intent in one contest either by de-selecting a vote in a given race, marking a vote in a race where there was no vote, or changing a vote.

The researchers found that just 40 percent of the voters reviewed their machine-printed ballots on their own, with just 6.6 percent spotting and reporting the error. A slightly higher percentage of participants, 7.8 percent, correctly identified the manipulation during an exit interview. “These results accord with prior studies that found that poor voter performance in other election security contexts,” the authors wrote. “The low rate of error detection indicates that misprinting attacks on BMDs pose a serious risk.”

The study’s authors concede BMDs can offer “practical advantages” over hand-marked paper ballots, including a more user-friendly interface, increased accessibility, and the ability to customize ballots down to the precinct level. Given those factors, and the fact that BMDs are already deployed in several states, the researchers also tested ways to encourage voters to carefully examine their ballot. Verbally instructing voters to review the printed ballots after they’d made their selections resulted in 14 percent of voters finding and reporting the BMD’s error, but passive signs and reminders to voters before they went to the machines did not make a significant difference.

While noting that the findings about interventions “may be encouraging,” the researchers wrote that additional research is needed to design procedures that ensure “high verification” can be achieved in real elections. Until and unless that happens, the researchers report “the safest course for security is to prefer hand-marked paper ballots.”