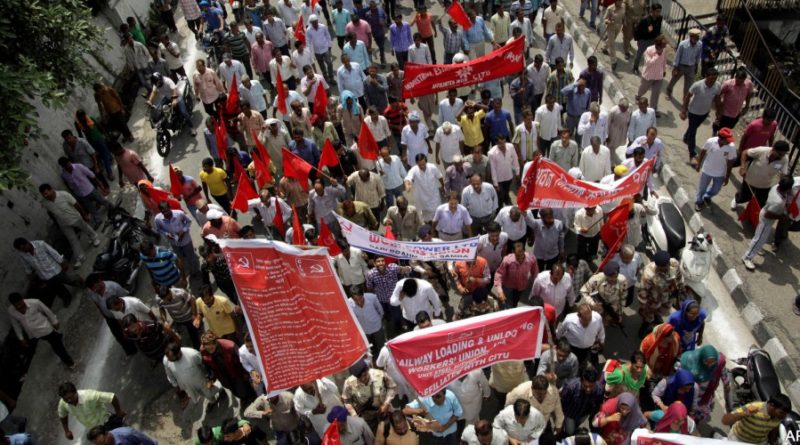 If a new trade union law goes into effect, India will essentially abandon any commitment to workplace democracy

Indian cities never go silent. Sound is a constant feature—the horns of cars, the chirping of birds, the cries of hawkers, the steady hum of a motorcycle engine. On Tuesday, India is on strike. It is likely that about 150 million workers will stay away from their workplaces. Trade unions of the Left have called for the strike, a general strike in a country exhausted by rising inequality and a mood of dissatisfaction.

The streets of Kerala—a state governed by the Left Democratic Front—are not quiet. Cars and motorcycles go their way. But the roads are quieter. Public transport is off the road, because the transport unions are behind the strike. Thiruvananthapuram sounds like it did about 20 years ago, when traffic was lighter and when the city was calmer. But there is nothing calm in the atmosphere. Workers are angry. The government in Delhi continues to betray them.

Strikes of this scale are not unusual in India. The largest recorded strike in world history took place in India in 2016, when 180 million workers protested the government of Prime Minister Narendra Modi. The demands of this strike are—as usual—many, but they center around the deterioration of the livelihood of workers, around the demise of work itself for many people and around the political attack on unions.

Modi’s government is eager to amend the trade unions laws. Tapan Sen, the leader of the Centre of Indian Trade Unions (CITU), said that the new trade union laws would essentially lead to the enslavement of Indian workers. These are strong words. But they are not unbelievable.

Since India won independence in 1947, it has pursued a “mixed” path of national development. Important sections of the economy remained in government hands, with public sector firms formed to deliver essential industrial goods to enhance the development goals of the country. The agricultural sector was also organized so that the government provided credit to farmers at subsidized rates and the government set procurement prices to ensure that farmers continued to grow essential food crops.

All this changed in 1991, when the government began to “liberalize” the economy, privatize the public sector, reduce its role in the agricultural market and welcome foreign investment. Growth was now premised on the rate of return on financial investment and not on the investment in people and their futures. The new policy orientation—liberalization—has grown the middle class and earned the wealthy fabulous amounts of money. But it has also created an agrarian crisis and produced a precarious situation for workers.

The government, since 1991, knew that it was not enough to privatize the public sector and to sell off precious public assets to private hands. It had to do two more things.

First, it had to make sure that public sector enterprises would fail and would then lose legitimacy. The government starved these public sector firms of funds and watched them swing in the wind. Without investment, these firms were unable to make improvements and so began to deteriorate. Their demise validated the argument of liberalization, although their demise had been manufactured by an investment strike.

Second, the government pushed to break trade union power by using the courts to undermine the right to strike and by using the legislature to amend the trade union laws. Weaker unions would mean demoralized workers, which would mean that workers would now be utterly at the mercy of the private firms.

This strike, like the 17 before it, is about livelihood issues and about the right to strike. A new trade union law sits in the legislature. It would mean the death of trade unionism in India. Tapan Sen’s statement about enslavement seems less hyperbolic in this context. If workers have no power, then they are effectively enslaved to the firm. This is already the case in factories that operate almost like concentration camps.

Walking through factories along the Chennai-Coimbatore corridor or in the Manesar area gives you a sense of the power of these new factories. They are a fortress, difficult to breach. Or a prison. Either way, trade unions are not welcome there. They are kept out by force—either violence or political muscle. Workers are often brought in from far away, migrants with few roots in the area. No workers stay long. As soon as they appear settled, they are removed.

Kerala is a unique place in India. Here, the culture of struggle remains strong; the pride in Kerala’s history of social transformation is evident. Over the course of the past 100 years, Kerala has sharpened its attack on hierarchy and on division. Horrific social practices were beaten back, and the Left movement cultivated public action as a normal feature of social life.

When the Left is in power—as it is now in power—it does not introduce new policies by fiat. Mass movements of the Left develop public campaigns to raise awareness and build a political will behind policies. This is one of the reasons why the air of hopelessness does not hang over Kerala.

Elsewhere in India, about 300,000 farmers have committed suicide largely because of the agrarian debt crisis. Professor Siddik Rabiyath of the University of Kerala tells me that the fisher folk have a higher debt burden than farmers, but that they do not commit suicide. He suggests that this might be because of the hope that the next day’s catch will rescue them from debt. It is also because of the general atmosphere of hopefulness in Kerala.

Last year, when this state of 35 million went underwater in a flood, the fisher folk grabbed their boats and became the frontline of rescue workers. They did not do this work for money or for fame. They did it because of the tradition of social solidarity in the state and because of the culture of public action here (see the Tricontinental: Institute for Social Research dossier on the floods in Kerala).

The rail lines out of Thiruvananthapuram do not function. Strikers sit on the tracks. They have blocked the trains. So have strikers in Assam—at the other end of India. They have also blocked railway lines. National Highway 16 in Bhubaneswar, Odisha, is a parking lot. Cars and motorcycles cannot move. Schools and universities are silent. Unions patrolled the industrial areas outside Delhi and outside Chennai. Public buses in Mumbai sit in their parking lots, bus stands a lonely sight.

Prime Minister Narendra Modi’s government has been silent. There are elections later this year. The temperature in India does not favor Modi. But that is not the reason for his silence. He has made it a habit to ignore public action, to stand above it all, pretend that it is not happening. If the new trade union law goes into effect, India will essentially abandon any commitment to workplace democracy. It is part of the slow erosion of democratic processes in the country, a drift into the ugliness of hierarchy and domination. The workers do not want this. They are on the streets. They have other plans for their future.

Featured image: On Tuesday, India is on strike. It is likely that about 150 million workers will stay away from their workplaces. (Photo: AP)