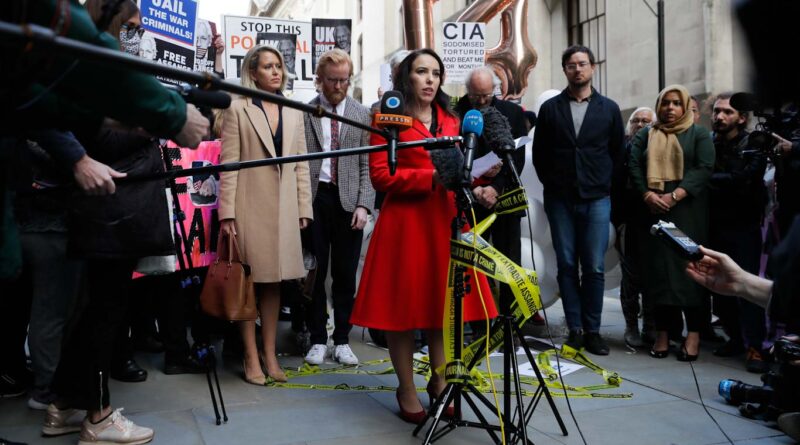 “90% of my traffic has just been cut off by what seems to be a general algorithm command of some kind to downplay Assange.” “I think it is as simple as that.”

Craig Murray, the former British ambassador to Uzbekistan and longtime confidant of Julian Assange, has been fastidiously reporting on the Australian publisher’s extradition hearing to the United States. Yet few people have been reading it. This, according to Murray, is because of a deliberate decision by online media giants to downplay or suppress discussion of the case. On his blog, Murray wrote that he usually receives around 50 percent of his readers from Twitter and 40 percent from Facebook links, but that has dropped to 3 percent and 9 percent, respectively during the hearing. While the February hearings sent around 200,000 readers to his site daily, now that figure is only 3,000.

“To be plain that is very much less than my normal daily traffic from them just in ordinary times. It is the insidious nature of this censorship that is especially sinister – people believe they have successfully shared my articles on Twitter and Facebook, while those corporations hide from them that in fact it went into nobody’s timeline,” he added.

“Anybody who is at all radical or takes any view of anything that is outwith the official establishment view gets used to occasional shadow banning, but I have never seen anything on this scale before.”

“90% of my traffic has just been cut off by what seems to be a general algorithm command of some kind to downplay Assange,” he added. “I think it is as simple as that.”

There has been considerable public interest in the court proceedings, but very little mainstream attention given to them. To be fair, British authorities have made it inordinately difficult to cover the case, allowing only a small handful of journalists into the Old Bailey court system, where they can watch a live television link up but cannot bring in recording devices. An online stream can only be watched if one registers and signs in between exactly 9:30 and 9:40 a.m., and if they suffer even a momentary lapse in wifi connection, they are shut out of the session. The court system has also blocked human rights groups, including Amnesty International, from monitoring proceedings.

Still, considering the implications for the future of journalism, the lack of coverage might surprise some. The New York Times, the flagship outlet of American print media (and a Wikileaks partner) printed only two articles on the subject and has not mentioned Assange in over two weeks. Its broadcast journalism equivalent CNN, meanwhile, has not touched the issue at all.

Online media creators have, for many years, lived with the threat of algorithmic suppression or demonetization of content on sensitive or controversial issues. YouTube regularly cuts all advertising on videos on the Syrian Civil War, fracking, or other topics on which advertisers might not wish to promote scrutiny. Even airsoft and paintball enthusiasts have learned not to use words like “shoot” and “gun” in their titles, lest the platform demonetizes their content.

Perhaps more alarmingly, however, Silicon Valley tech giants are becoming increasingly closely intertwined with the state department, to the point where it is often difficult to tell where one ends, and another begins. “What Lockheed Martin was to the twentieth century…technology and cyber-security companies [like Google] will be to the twenty-first,” wrote Google executives Eric Schmidt and Jared Cohen in their book, “The New Digital Age: Reshaping the Future of People, Nations and Business.” For example, Facebook is now in a close partnership with the Atlantic Council, who essentially decides for them what content to promote in people’s news feeds and what content is discarded as fake news, misinformation, or low quality. The problem is that the Atlantic Council is a NATO cutout, and a government-funded organization whose board of directors is a who’s who of deep state officials, including virtually every living ex-C.I.A. director, Bush-era cabinet members like Condoleezza Rice and Colin Powell, and military generals like Wesley Clark and David Petraeus. Thus, an organization like this deciding what the world sees on their screens is barely one step removed from total government control of the flow of information.

The U.S. government also frequently directly interferes with content appearing on prominent social media. Earlier this year, Facebook announced that it would remove all comments or posts in praise of recently-slain Iranian General Qassem Soleimani from all its platforms. This was done to comply with the Trump administration’s designation of the Iranian Revolutionary Guard Corps (which Soleimani led) as a terrorist organization. The problem is that Soleimani was Iran’s most popular political figure, with an over 80 percent approval rating, and that Instagram is used by around one-third of the entire Iranian population. Thus, Iranians speaking in their local language were barred from sharing a majority opinion with their country folk because of a decision by Donald Trump.

The Middle East is a particularly contentious area of the world. Yet when news broke that the British Army’s online psychological operations brigade had managed to become a senior Twitter executive, responsible for Middle Eastern content, media largely ignored it, raising even more questions. Algorithm changes have also hammered independent alternative media outlets — often precisely the ones most likely to cover the Assange case — drastically reducing their search engine traffic flow.

Former C.I.A. chief Leon Panetta (an honorary director of the Atlantic Council) recently admitted that Assange is being prosecuted as a warning to journalists. “All you can do is hope that you can ultimately take action against those that were involved in revealing that information so you can send a message to others not to do the same thing,” he told a German documentary crew. While the message is being heard loud and clear by journalists, the public is far less aware that anything is going on, thanks, in part, to online suppression of news about the case. Judge Vanessa Baraitser is scheduled to pronounce judgment on the media “trial of the century” on January 4, after the U.S. presidential election. Murray will doubtless be there. But will anyone read what he has to say?

Featured image: Stella Moris, partner of Julian Assange gives a statement outside the Old Bailey in London, Oct. 1, 2020, as the Assange extradition hearing to the US ended, with a result expected later in the year. Kirsty Wigglesworth | AP<