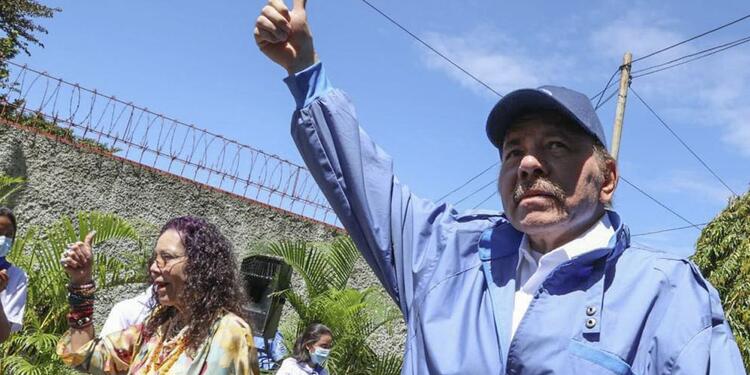 Caracas, November 8, 2021 (Special for OrinocoTribune.com)—Nicaragua’s President Daniel Ortega, of the Sandinista National Liberation Front (FSLN) was re-elected for a fifth term of five years, and a fourth consecutive term, with 75.9% of the votes polled in the general elections held on Sunday, November 7, according to the second report released earlier today by the Nicaraguan Supreme Electoral Council (CSE) on its Twitter account.

With 97.74% of the 13,459 Ballot Receiving Boards (JRV) scrutinized, the president obtained a wide margin of victory over other rivals, amid a strong voter turnout of 65.23%. Elector enthusiasm at the polls was particularly notable when one takes into account the electoral boycott promoted by elements of Nicaragua’s extreme right and pro-US political elements, and by international and local mainstream media outlets. The turnout was barely affected by this campaign. In 2006 turnout was 61.2%, in 2011 it jumped to 73.9%, and it was reported at 68.2% in 2016.

In second place, according to the most recent official report shared by the CSE at 4:23 p.m. Caracas time, is the candidate of the Constitutionalist Liberal Party (PLC), deputy Walter Martínez, with 14.15% of the votes. He is followed by the Reverend Guillermo Osorno of the Nicaraguan Christian Way (CCN), with 3.3% of the votes.

International reactions
Venezuela: The Venezuelan President Nicolás Maduro Moros was one of the first leaders of the continent to congratulate Commander Ortega and the people of Nicaragua for holding the election day in peace and with joy. “The sons and daughters of Sandino voted for peace, stability, and the prosperity of their Homeland,” wrote President Maduro on Twitter.

President Maduro’s words were followed by an official statement issued by the Venezuelan ministry of foreign affairs with the following content, unofficially translated by Orinoco Tribune:

The President of the Bolivarian Republic of Venezuela, Nicolás Maduro Moros, on behalf of the Venezuelan people and government, sends its embrace of solidarity and congratulations to Commander President Daniel Ortega and to the Vice President, compañera Rosario Murillo, for their legitimate re-election, and to the people of the sister Republic of Nicaragua, for the undeniable victory of the Sandinista National Liberation Front (FSLN), in the general elections held this Sunday, November 7.

Nicaragua ratified its independence and self-determination through the democratic instrument of the vote. It ratified before the world its willingness to continue traveling in peace, a political process that has guaranteed in the last decade the restitution of fundamental human rights, stripped away by the imposition of neoliberalism.

The people of Sandino and Darío have given the greatest demonstration of love for their country, of political maturity, and of popular resistance in the face of the titanic pressures of imperialism, which tried in every possible way to restrict their right to choose in freedom and without blackmail, their national authorities.

The Bolivarian Republic of Venezuela ratifies its strongest solidarity commitment to continue, alongside the Sandinista government and with ALBA-TCP, the construction of a world of peace and justice, a world where the self-determination and sovereignty of the peoples is respected, a multicentered and multipolar world. In short, a new world that allows us to make possible the “Supreme Dream of Bolívar.”

ALBA-TCP: The Executive Secretariat of the Bolivarian Alliance for the Peoples of Our America-Peoples’ Trade Treaty (ALBA-TCP) issued a solidarity statement to salute the Nicaraguan people for their civic and participatory behavior in the elections.

Cuba: Miguel Díaz-Canel Bermúdez, president of Cuba, also congratulated the people of Nicaragua, Daniel Ortega and Rosario Murillo, for their victory in Sunday’s elections. In a message published on his Twitter account, the Cuban president pointed out that the elections were a demonstration of sovereignty and civility in the face of the cruel media campaign vilifying Nicaragua.

“Congratulations to the brother people of Nicaragua, Daniel Ortega and Rosario Murillo, for the result of the elections this Sunday, which were a demonstration of sovereignty and civility in the face of the cruel media campaign…” wrote Díaz-Canel on Twitter. “You can always count on the support of Cuba. Un abrazo [a warm embrace].”

Bolivia: Bolivia’s ministry of foreign affairs issued an official statement saluting Nicaragua’s democratic fiesta. “Bolivia welcomes the general elections in Nicaragua,” reads the statement. “The Ministry of Foreign Affairs salutes the Nicaraguan people for their participation and democratic drive in the electoral process that took place this Sunday, November 7, 2021. We are sure that with majority participation and respect for the popular vote, democracy is strengthened, as a full exercise of the sovereignty of the people.”

Russia: Russia also considered the position of the United States—non-recognition of the electoral results—as “unacceptable,” and confirmed its opinion that the elections were carried out in compliance with all the requirements of the country’s legislation. This was said by Russian Foreign Affairs Minister Sergei Lavrov, and reported by the Interfax news agency. “We consider this to be unacceptable and we strongly condemn this line,” Lavrov said at a press conference following talks with Venezuelan Foreign Affairs Minister Félix Plasencia, currently on official tour in Russia.

US and its lackeys: On the day of the elections the US regime issued an interventionist statement questioning the legitimacy of the electoral process in Nicaragua in a fashion very similar to the one issued before launching the Lima Group in an attempt to oust Venezuelan president Nicolás Maduro. The widely discredited Lima Group has been all but abandoned after the victory of Pedro Castillo in host country Peru. A few hours later, US lackeys in Latin America and Europe began a familiar process of parroting similar statements questioning the legitimacy of Nicaragua’s elections.

Among the first entities acting under US direction were Costa Rica, Colombia, and the European Union. On Monday, Castillo’s Peru published a statement that resembled the Lima Group’s failed approach, now directed towards Nicaragua. Perhaps it is to be expected that a country traditionally subservient to US interests would in many cases continue to obediently accept the directives issued by the US Department of State through its embassies around the world.

Important regional players like Mexico and Argentina that have generally echoed the opinions of the US regime towards Nicaragua in recent months, are yet to issue official pronouncements on this sensitive issue. According to analysts, these countries should take into consideration the disastrous precedent of the Lima Group before making polarizing statements.