For the first time in 49 years, the Bloody Sunday Commemorative March has been forced off the road, as the COVID-19 worldwide pandemic makes the march a victim of the social distancing regulations now in force to combat the virus.

Here Betty McBrearty Doherty, a native of Derry city and campaigner for justice, explains how the virus has affected the continuing campaign of truth with justice, for the Bloody Sunday victims and their surviving family members.

The background
On January 30, 1972, in Derry City, Northern Ireland, there was a march for Civil Rights which was attended by over 20,000 people.

The march had been organized by the local population to demand an end to the practice of Internment Without Trial.

This draconian law was used under the Emergency Special Powers Act, which allowed the state to intern its citizens without charge of criminality or offence and simply imprison people the state decided may be a threat.

In reality the majority of all those interned where simply law-abiding citizens and their families, rightly, demanded their release.

Most of the internees were from Belfast and Derry. Nearly all were Catholic.

Interment officially ended in December 1975. A total of 1,981 had been held without trial.1,874 of whom were Catholic Irish Nationalists and 107 were Loyalist British Protestants.

The march set off, with 20,000 people demanding an end to this injustice.

When it was over, 26 people had been shot. Fourteen were to die and a great lie was born.

All the killed and dying on that day had been identified as being armed and engaged in gun battles with the army.

The republicans had opened fire on the army and this was the result.

No soldiers injured, just 13 dead and another to succumb to his wounds several months later.

To the people of Derry mass-murder and indiscriminate gunfire had been unleashed by the British army, on the defenseless people of the city. Those dead and dying were innocent of any offence, save demanding justice for the relatives, friends and neighbors.

They murdered the people to kill the ongoing protests.

Murder was a tactic used by the Army, instructed, many believe by the very highest echelons within the British Army and the British government.

The next year 2022, will see the  campaign reach a milestone.

For 50 years the people of Derry have been demanding prosecutions and for the full truth to be disclosed.

“This year has been a really strange year, hasn’t it? With the last eight months or so with COVID, and just before Christmas, the restrictions became really strict. No more than two people can walk together and people still need to socially distance. Many of the Bloody Sunday family members are getting older. We are nearly 50 years on from the original march.

“It is important not to put the elderly remaining family members in any danger, or anyone else for that matter.

“We had to cancel the march because of the virus. It would not have been very sensible to bring people onto the streets but hopefully, we will be back next year on the 50th anniversary which is another landmark.

“We have had two inquiries, both the Widgery Tribunal and the Saville inquiry into those events in 1972. From my point of view, the second Bloody Sunday Inquiry pacified some people. Some people were happy enough at that stage when David Cameron, the then-British Prime Minister, confirmed that the deaths on Bloody Sunday by the British army were ‘unjustified and unjustifiable’

“The reality remains they haven’t told the truth.

“Just last week we found out that the Northern Ireland Civil Rights Association that organized the march had been infiltrated by Mi5 at that time. There is a possibility that there were spies on the march?

“There is still a stain on the name of young, said Gerard Donaghy.

“The Saville inquiry said he probably had nail bombs on him. We all know that is a lie because the people who took him to hospital told the inquiry they had examined him in the house for his injuries, before taking him to hospital and there was no way he had any bombs. This is just a lie, as part of the cover-up.

“So what was Saville protecting there?

“I am assuming had he gone down that line of enquiry as to how the British army claimed he had nail bombs on his person, the highest echelons of the British military, would have had to appear before the inquiry which would have led to the government?

“There is still plenty to come out. Saville did not touch that’

A British soldier who was present on the day known only as “027” has stated publicly “that there was no justification for the firing of even a single shot.”

Within minutes of the shootings, the British Army soldiers stuck to the story that they had engaged gunmen and shot only identifiable targets.

With the exception of that one soldier who did not give evidence?

The campaign will continue. We must never forget what happened here in broad daylight on  January 30, 1972.

At the bottom of my street, there was mass murder.

They murdered my fellow citizens and attempted to murder the other 20.000 people who were on that march.

This was not in some dictatorship halfway around the world.

This was on the streets of what those in charge claimed to be the UK.

We cannot forget that.

We cannot allow this to happen in a democracy.

We must continue to make people aware of what happened on these British streets in 1972.

This is how they treat us.

This is by a colonial power.

We want prosecutions, but as Kate Nash would say, she doesn’t care “if they even do one day in jail, as long as it is recorded in the history books, they were prosecuted for these crimes.” Although the soldiers are the patsies and they will carry the can, it should go further. Their commander General Jackson should be jailed. General Ford and others.

For the first time, we also had to cancel our weekly program of events and go online.

Through Zoom, we were able to allow contributions from all over the world. People could virtually attend workshops, meetings, book launches and discussions.

Hopefully next year we can return and march once again along the original route of the march. 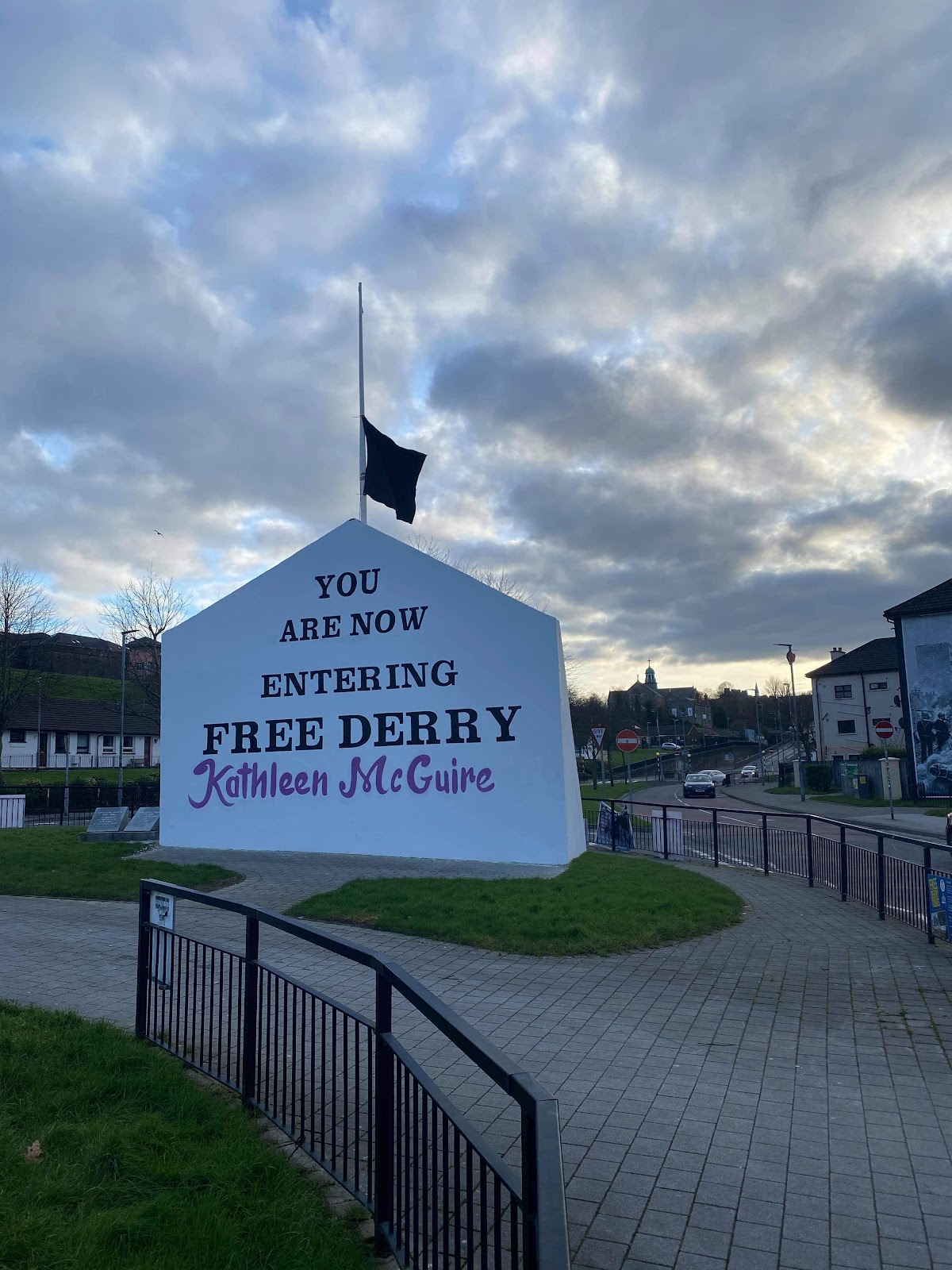 A black flag was hung at Free Derry Corner at 4:10 pm on January 30 2021. This marks the time of the first shooting by the British on Bloody Sunday.

In David Cameron’s address to the House of Commons, he said:

“Mr. Speaker, I am deeply patriotic. I never want to believe anything bad about our country. I never want to call into question the behavior of our soldiers and our army, who I believe to be the finest in the world. And I have seen for myself the very difficult and dangerous circumstances in which we ask our soldiers to serve. But the conclusions of this report are absolutely clear. There is no doubt, there is nothing equivocal, there are no ambiguities. What happened on Bloody Sunday was both unjustified and unjustifiable. It was wrong.”

List from Wikipedia of the victims, and where they were murdered.

The casualties are listed in the order in which they were killed.

• John “Jackie” Duddy, age 17. Shot as he ran away from soldiers in the car park of Rossville Flats. The bullet struck him in the shoulder and entered his chest. Three witnesses said they saw a soldier take deliberate aim at the youth as he ran. He was the first fatality on Bloody Sunday. Both Saville and Widgery concluded that Duddy was unarmed.

• Michael Kelly, age 17. Shot in the stomach while standing at the rubble barricade on Rossville Street. Both Saville and Widgery concluded that Kelly was unarmed. The Saville Inquiry concluded that “Soldier F” shot Kelly.

• Hugh Gilmour, age 17. Shot as he ran away from soldiers near the rubble barricade. The bullet went through his left elbow and entered his chest. Widgery acknowledged that a photograph taken seconds after Gilmour was hit corroborated witness reports that he was unarmed. The Saville Inquiry concluded that “Private U” shot Gilmour.

• William Nash, age 19. Shot in the chest at the rubble barricade. Three people were shot while apparently going to his aid, including his father Alexander Nash.

• John Young, age 17. Shot in the face at the rubble barricade, apparently while crouching and going to the aid of William Nash.

• Michael McDaid, age 20. Shot in the face at the rubble barricade, apparently while crouching and going to the aid of William Nash.

• Kevin McElhinney, age 17. Shot from behind, near the rubble barricade, while attempting to crawl to safety.

• James “Jim” Wray, age 22. Shot in the back while running away from soldiers in Glenfada Park courtyard. He was then shot again in the back as he lay mortally wounded on the ground. Witnesses, who were not called to the Widgery Tribunal, stated that Wray was calling out that he could not move his legs before he was shot the second time. “Soldier F” faces charges for his murder.

• William McKinney, age 26. Shot in the back as he attempted to flee through Glenfada Park courtyard. “Soldier F” faces charges for his murder.

• Gerard ‘Gerry’ McKinney, age 35. Shot in the chest at Abbey Park. A soldier, identified as ‘Private G’, ran through an alleyway from Glenfada Park and shot him from a few yards away. Witnesses said that when he saw the soldier, McKinney stopped and held up his arms, shouting “Don’t shoot! Don’t shoot!,” before being shot. The bullet apparently went through his body and struck Gerard Donaghy behind him.

• Gerard “Gerry” Donaghy, age 17. Shot in the stomach at Abbey Park while standing behind Gerard McKinney. Both were apparently struck by the same bullet. Bystanders brought Donaghy to a nearby house. A doctor examined him, and his pockets were searched for identification. Two bystanders then attempted to drive Donaghy to hospital, but the car was stopped at an Army checkpoint. They were ordered to leave the car and a soldier drove the vehicle to a Regimental Aid Post, where an Army medical officer pronounced Donaghy dead. Shortly after, soldiers found four nail bombs in his pockets. The civilians who searched him, the soldier who drove him to the Army post, and the Army medical officer, all said that they did not see any bombs. This led to claims that soldiers planted the bombs on Donaghy to justify the killings.

• Patrick Doherty, age 31. Shot from behind while attempting to crawl to safety in the forecourt of Rossville Flats. The Saville Inquiry concluded that he was shot by “Soldier F,” who came out of Glenfada Park. Doherty was photographed, moments before and after he died, by French journalist Gilles Peress. Despite testimony from ‘Soldier F’ that he had shot a man holding a pistol, Widgery acknowledged that the photographs show Doherty was unarmed, and that forensic tests on his hands for gunshot residue proved negative.

• Bernard ‘Barney’ McGuigan, age 41. Shot in the back of the head when he walked out from cover to help Patrick Doherty. He had been waving a white handkerchief to indicate his peaceful intentions. The Saville Inquiry concluded that he was shot by “Soldier F.”

• John Johnston, age 59. Shot in the leg and left shoulder on William Street 15 minutes before the rest of the shooting started. Johnston was not on the march, but on his way to visit a friend in Glenfada Park. He died on 16 June 1972; his death has been attributed to the injuries he received on the day. He was the only fatality not to die immediately or soon after being shot.