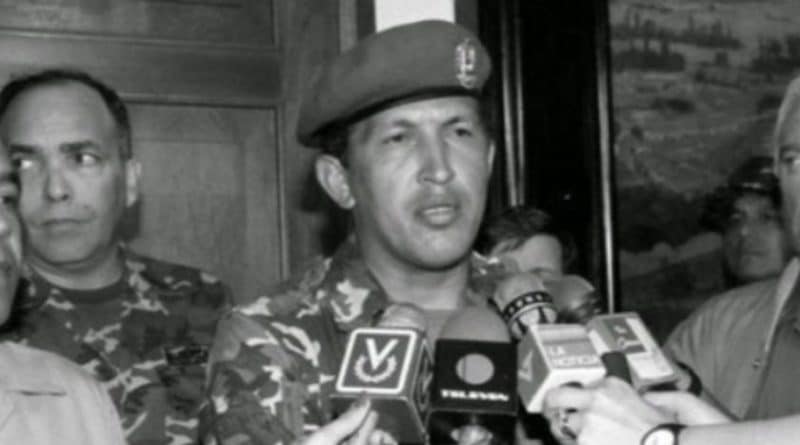 Can an event of the past give us a warning about current events today? The answer is affirmative if we believe that history is a teacher. When we look at an important historical event we usually tend to remember the factual information surrounding the event – the actual facts that took place at the time. As we are fond of marking anniversaries, that is essential. But we must also be challenged to re-examine the event for new meaning and new insight on the relevance of the event.

In history books, facts are usually accurate; official documents will testify to them. However, the analysis of those facts that will be recorded in the history books will depend on the correct interpretation of the actions as they were intended to be when they were carried out. The accuracy of the evidence including a balanced reporting of the analysis must be preserved.

At this time Venezuelans remember the anniversary of the revolt by Hugo Chávez in Venezuela on February 4, 1992. In a region where symbolism marks important events, that day has been declared as “Venezuela’s National Dignity Day”. We have already referred in a previous article to what aspects of Simon Bolivar’s thinking may have inspired Chávez, and we have a good idea of what were Chávez’s reasons for the revolt, but we also need to ask, what is the implication for Venezuela today, 28 years later?

Chávez believed that the “Bolivarian project”, as he called it, had not been completed, since Venezuela and the rest of Latin America had not achieved full independence – neither politically nor economically – and were still under a neo-colonial domination. He justified his actions in these words: “the same system, in economics and politics, the same denial of human rights and the right of the people to determine their own destiny [was still in place]… Venezuela was suffering a terminal crisis, ruled by a dictatorship dressed up in democratic clothing.” [1]

The “democratic clothing” was a reference to the appearance of a multi-party system when in reality the two dominant parties had signed a pact to form a centre-right monopoly of power controlled by the interests of the Venezuelan oligarchy, to the exclusion of the people, which did not allow a challenge to the policy consensus. Chávez referred to this monopoly as “Puntofijismo” after the location where the Pact of Punto Fijo was signed in Caracas. [2]

The failure of the coup in 1992 turned into an unexpected success since it gave Chávez the opportunity to attain exposure and to instigate a population that was ready for a wake up call to the contradiction of a rich country with 80% of the people living in poverty. A large majority of Venezuelans supported the rebellion.

But that failure did not stop Chávez from fulfilling his promise made ten years before in 1982: “I swear for the gods of my parents; I swear for my country; I swear for my honour that I will not give peace to my soul nor rest to my arms until I see broken the chains that oppress my people under the will of the powerful.”

The political reason he gave and his personal determination brought him to run for president and win the election in 1999 on a platform that promised to break the long stretch of Puntojismo that lasted from 1958 to 1999, and bring about a profound transformation of Venezuelan society. Chávez saw the social problems in Venezuela as a consequence – not as a coincidence – of the exploitation of its wealth by foreign corporations in complicity with the national oligarchy.

Chávez believed that Venezuela needed to gain total control of its oil industry so its revenues would benefit all Venezuelans equally and fairly in a process guided by the state through social programs. At the same time, and in order to do that, he would fulfill Simon Bolivar’s dream of true independence from all colonial powers not only for Venezuela but also for Latin America through fair trade integration of all countries into la Patria Grande – as he called it – the Great Homeland.

Chávez’s life was cut short by his premature death in 2013 but his legacy is captured in a single word, Chavismo. The intention that moved him to the action of February 4, 1992 is still alive and necessary today. The majority of Venezuelans have called on President Nicolas Maduro to bring forward the Bolivarian Revolution. The presidential elections that took place in May 2018 was the expression of the popular will of the majority of Venezuelans – freely, democratically and sovereign.

However, there has been a concerted effort to stop the Bolivarian project since its inception. Those who have inherited the political drive of Puntofijismo attempted a revolt against Chávez in 2002 that was much too soon to be used as a declaration of failure of his project, and, as history must record, it was against the majority of the people who in fact restored him to power.

While the Venezuelan opposition is totally fractured, the US insists in propping up its “chosen” candidate to lead the country and is co-opting a number of countries to do the same.

Currently, dominant governments have tacitly signed another pact – akin to an international Puntofijismo whose headquarters are clearly and overtly located in Washington, not in Caracas. This is a new pact to form an international monopoly of power controlled by the interests of the international oligarchy that is ready to re-install the original holders of Puntofijismo in Venezuela, indeed a more perverse version of it.

The tools of this pact are those of a Hybrid War on Venezuela including the promotion of violence and terrorist actions, relentless threats to Venezuela’s sovereignty, sanctions by the US, Canada and the EU, and a stringent financial blockade imposed on Venezuela’s resource sector affecting essential imports.

If there is any useful reminder from Chávez’s revolt of February 4, 1992, is that the danger of a repeat of the monopoly of power in Venezuela has not ceased to exist, it just moved to Washington and other colonial capitals. And if there is any implication for Venezuela it’s a warning that president Maduro will have to embrace more firmly Chávez’s legacy and embark in dismantling the Washington “Puntofijismo” by challenging its devastating international policy consensus.