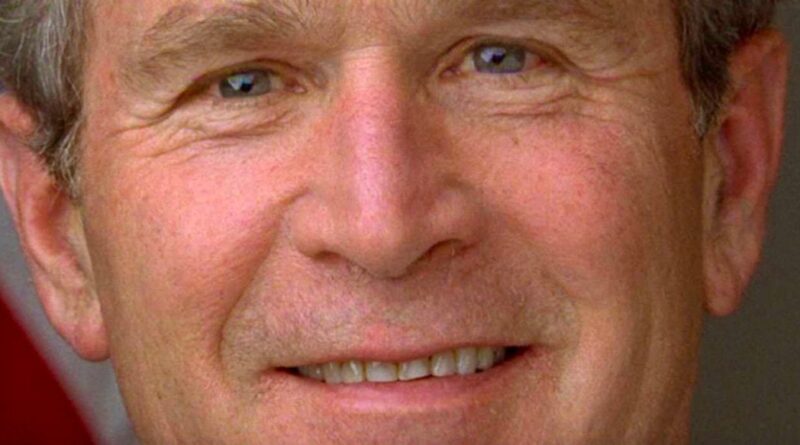 George W Bush has issued a statement on the situation in Afghanistan, and there are not enough shoes in the world to adequately respond to it.

“Laura and I have been watching the tragic events unfolding in Afghanistan with deep sadness,” the Hague fugitive writes. “Our hearts are heavy for both the Afghan people who have suffered so much and for the Americans and NATO allies who have sacrificed so much.”

Bush tells the US Armed Forces, diplomatic corps, and intelligence community how proud he and his wife are of their “sacrifice” and “courage” and that they “kept America safe” and “made America proud” with their decades-long occupation which accomplished literally nothing besides making horrible people very rich. And, it won’t surprise you to learn, the statement contains exactly zero apologies to anyone for anything.

President and Mrs. @laurawbush have released a statement on Afghanistan. Read it here: https://t.co/GJO1CGZHpC

Can you believe this person? Imagine being George W Bush in the middle of August 2021 and saying to yourself, “I know just what people need: a pep talk on Afghanistan from me, George W Bush!”

I mean, the gall. The absolute gall.

RELATED CONTENT: The US and Afghanistan: Exit the Paper Tiger

This is after all the same man who ordered the disastrous invasion in the first place under the justification of the plot hole-riddled 9/11 narrative after already having decided to oust the Taliban a month before the towers came down. The same man who rejected the Taliban’s offer to turn over Osama Bin Laden in October 2001 if the US would just show proof that he is guilty and end its bombing campaign. The same man who repeatedly rejected Taliban offers to surrender after the invasion began. The same man who initiated decades of lies about what was happening in Afghanistan in order to justify an occupation maintained for power and profit.

And after all that phony hand-wringing about “the oppressed people of Afghanistan“, the United States is after twenty years of occupation leaving the Afghan people the single most miserable population of any nation on earth. After all that phony hand-wringing about “the Taliban’s war on women“, Afghanistan has remained the worst place in the world to be a woman throughout the entirety of the occupation.

And it is entirely the fault of the US-centralized empire. The Taliban only came to power in the first place because the US backed their predecessors (whom they also actively radicalized) against the Soviet Union and its leftist Afghan allies in the eighties, then Bush invaded and rained explosives from the sky for twenty years, killing hundreds of thousands of people.

After four decades of interventionism and two decades of full-scale occupation following generations of shocking savagery and terrorism being inflicted upon the Afghan people by the British, it is perfectly fair to say that one hundred percent of Afghanistan’s problems today can be blamed entirely on the US and its allies.

So now, as the nation reverts back to Taliban control after a long and sadistic intermission and many Afghans are so fearful that some fell to their deaths desperately clinging to departing US military planes, it would be a fantastic time for George W Bush to shut the fuck up.

Not sure John Bolton needs to be one of the first people to be interviewed on the fall of Kabul by NPR’s Morning Edition. pic.twitter.com/e7fQALSgxV

But George W Bush did not shut the fuck up. Not only did George W Bush not shut the fuck up, but Bush administration war architects like John Bolton and Paul Wolfowitz are being interviewed by the mass media for their opinions on whether it was wise to finally end one of Bush’s wars. Bolton was given a platform on NPR to tell the world that the withdrawal is a “catastrophic failure of American leadership” and that the US should intervene to oust the Taliban once again. Wolfowitz was interviewed by BBC Radio where he said he feels “deep trepidation” about the withdrawal and called it a boon to China and to terrorists everywhere.

Yeah that’s sane and normal. Hello I’m a very serious newscaster; now here to explain what’s happening in Afghanistan let’s turn to a Bush administration PNAC neocon who’s helped create mountains of corpses and who is literally always wrong about literally everything. This could only happen in a media environment where blatant war propaganda is routinely disguised as news reporting.

What the US empire has done to Afghanistan is unforgivable. Utterly unforgivable. Never forgive those monsters. Never forget what they did to that poor country. Never forget that the next time you are asked to support another act of US military interventionism it will with absolute certainty be based on lies, fail to accomplish what its proponents claim, end in disaster, result in many broken promises to all parties involved, cost trillions of dollars, and benefit nobody but the very worst among us.

Featured image: George W Bush, former US president who started the US-NATO war on Afghanistan, is still getting platforms to opine on Afghanistan. Photo: screenshot