Israel is now at a crossroads. It can only win back the support of US Jews if it abandons Zionism altogether, or abandon them in favor of complete reliance on the Evangelicals. In fact, some top Israeli officials are already advocating the latter.

A unique but critical conversation on Israel and Palestine is taking place outside the traditional discourse of Israeli colonialism and the Palestinian quest for liberation. It is an awkward and difficult—but overdue—discussion concerning American Jews’ relation to Israel and their commitment to its Zionist ideology.

For many years, Israel has conveniently dubbed Jews who do not support Israel, or worse, advocate Palestinian freedom, as “self-hating Jews.” This term, designated to describe dissident anti-Zionist Jews, is similar to the accusation of “antisemitism” made against non-Jews, which includes Semitic Arabs, for daring to criticize Israel. This approach, however, is no longer as effective as it once was.

Recent years have unequivocally demonstrated that there is a quiet anti-Israel rebellion within the American Jewish community. This rebellion has been brewing for long, but only fairly recently did numbers begin reflecting the rise of a new phenomenon where US Jews, especially younger generations, are openly dissenting from the typical Jewish conformity on Israel and supposedly undying love for Zionism.

In the last decade or so, this new reality has sounded the alarm within various Zionist institutions, whether in the US or in Israel itself.

Several opinion polls and surveys are all pointing to an inescapable conclusion that the emotional and political rapport between Israel and US Jews is rapidly weakening. A poll published by the Laszlo Strategies for Jerusalem U in August 2013, for example, concluded that 87% of American Jews over the age of 50 strongly agreed that “caring about Israel is a very important part of my being Jewish,” while only 66% of young Jews between the ages of 18 to 29 felt the same.

RELATED CONTENT: The Palestinian Cause is Neither a Religious nor a Human Rights Cause

Other polls reached similar conclusions, where the number of young Jews strongly supportive of Israel continues to decline. A particularly telling and important survey was that of the American Jewish Committee in June 2018. That was the time when the US-Israeli alliance reached its zenith under the administrations of Donald Trump and Benjamin Netanyahu. Though 77% of all Israelis approved of the US government’s handling of US-Israeli relations, only 34% of American Jews did. In fact, 57% of US Jews outright disapproved of Trump’s policies, which practically granted Israel all of its demands and wishes.

The downward trajectory continued unabated. A May 2021 Pew research indicated that one in five US Jews believes that the US is “too supportive of Israel.” Those who hold such a belief, 22% of the US Jewish population, have doubled in number since an earlier poll released in 2013. 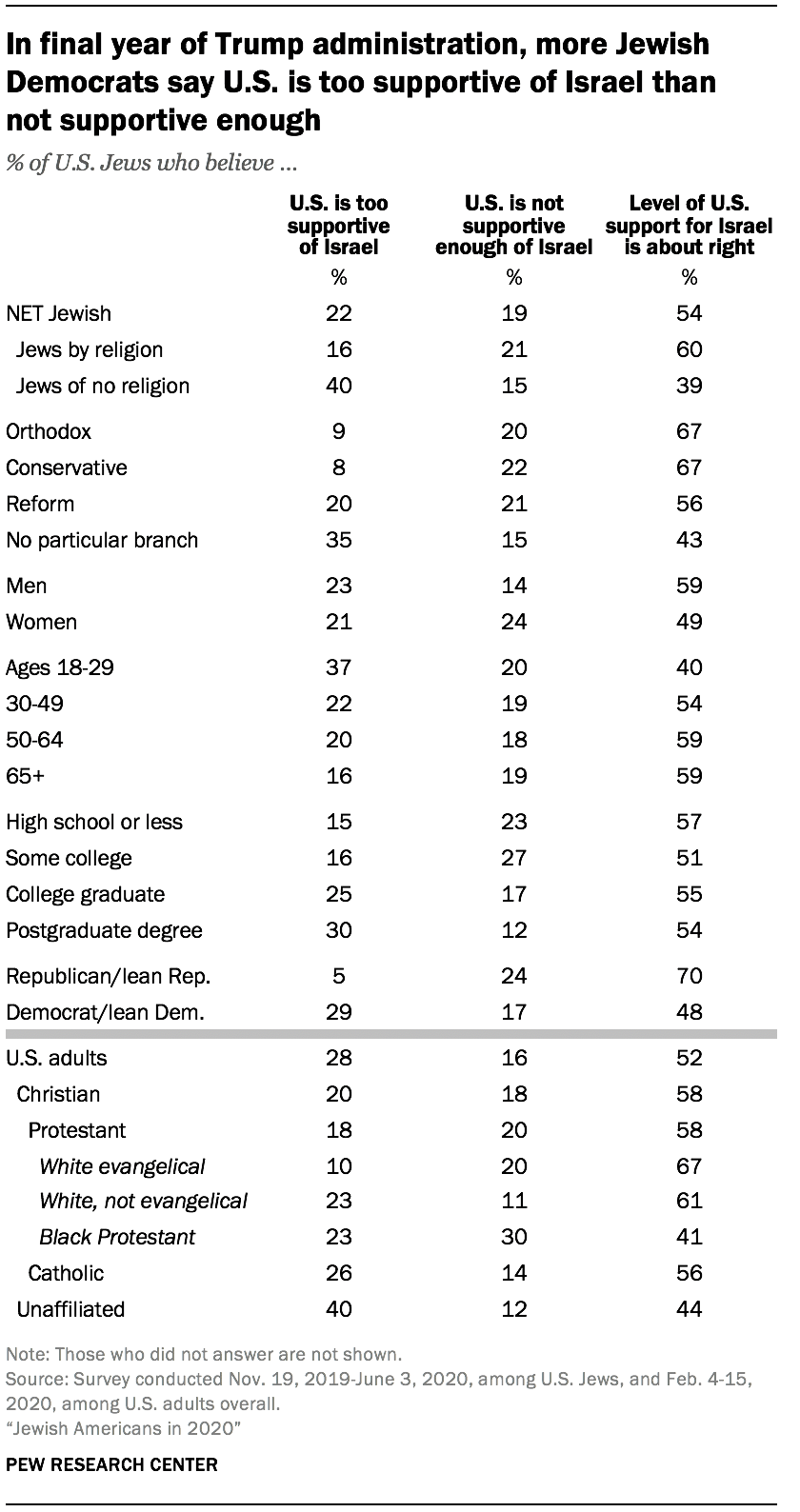 Data gathering for the above poll, though released during the deadly Israeli onslaught on Gaza (May 10-21), was, in fact, conducted in 2019 and 2020. The numbers of unsupportive US Jews must have risen since then, as if there is a clear correlation between Israeli wars resulting in massive civilian casualties, and the ongoing split between US Jews and Israel.

Libby Lenkinski, Vice President for public engagement at the New Israel Fund, told Rolling Stone magazine that she sees a “noticeable shift in American perception” on Palestine and Israel since the deadly Israeli war on Gaza in 2014, a war that killed over 2,200 Palestinians. For Lenkinski, US Jewish perception should follow an ethical paradigm. “It’s a moral issue. It’s right or wrong,” she said.

RELATED CONTENT: Palestine Aid on the Ground in Gaza

Similar sentiments emerged after the May 2021 war, where over 260 Palestinians were killed. In a recent article, American Jewish writer, Marisa Kabas, explains the dilemma felt by many in the US Jewish community regarding Israel. “Because the conflict has so often been boiled down to a binary—you either support Israel or you support its destruction—for many of us it felt like a betrayal to even consider the other side.” Because of the likes of Kabas and Lenkinski and numerous others, the “other side” is finally visible, resulting in the obvious shift in American Jewish perception of and relations to Israel.

While more space for dissenting US Jews is opening up, the discussion in Israel remains confined and is hardly concerned with ethics and morality.

Recently, the understanding that Israel is losing the support of US Jews has been accepted by the country’s main political parties, with disagreement largely focused on who is to blame for this seismic shift. Netanyahu was often held responsible for making Israel a partisan American political issue through his alliance with Trump and the Republican Party, at the expense of Israel’s relation with the Democrats.

However, the Netanyahu-Trump love affair was not as uncomplicated as Netanyahu’s critics would like to believe. Indeed, the idea of Israel has changed in American society. The notion that Israel is a supposedly vulnerable little state, facing existential threats by Arab enemies, which flourished in the past, has become almost entirely irrelevant. The new concept of Israel, which is Tel Aviv’s main selling point in America, is that of a biblical Israel, a place of prophecies and spiritual salvation, which appeals mostly to right-wing Evangelical Christian groups. Young US Jews, many of whom support the Black Lives Matter and even the Palestinian boycott movements, have little in common with Israel’s zealot American backers.

Israel is now at a crossroads. It can only win back the support of US Jews if it behaves in such a way that is consistent with their moral frame of reference. Hence, it would have to end its military occupation, dismantle its apartheid regime and reverse its racist laws. Specifically, abandon Zionism altogether, or abandon US Jews in favor of complete reliance on the Evangelicals. In fact, some top Israeli officials are already advocating the latter.

On May 9, former Israeli ambassador to the US, Ron Dermer, argued that, since Evangelical Christians are the “backbone of Israel’s support in the United States,” Israel should prioritize their “passionate and unequivocal” backing of Israel over American Jews who are “disproportionately among our critics.”

If Israel officially opts for this choice, perhaps with no other viable option, then a breakdown between Israel and US Jews becomes inevitable. As far as justice and freedom for the Palestinian people are concerned, that would be a good thing.

Ramzy Baroud is a journalist, author, and the editor of The Palestine Chronicle. Dr. Baroud is a Non-resident Senior Research Fellow at the Center for Islam and Global Affairs (CIGA) and also at the Afro-Middle East Center (AMEC). His website is www.ramzybaroud.net