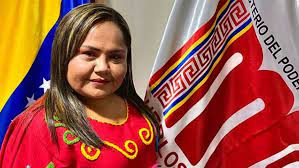 On Friday, August 20, President Nicolás Maduro appointed indigenous leader Roside Virginia González as the new minister for the welfare of the indigenous peoples of Venezuela.

President Maduro informed the new appointment on his Twitter account. As the new head of the Ministry for Indigenous Peoples, Roside Virginia González replaces Yamilet Mirabal.

Maduro stressed that González will continue with the extraordinary work carried out by Yamilet Mirabal, who is now preparing to participate in the November 21 regional and municipal mega-elections.

“[González] has the task of continuing with the extraordinary work of Yamilet Mirabal, who will fulfill her commitment regarding the upcoming mega elections of November 21,” tweeted President Maduro.

Roside Virginia González’s appointment is part of a series of new appointments to the ministerial cabinet made by the president this Thursday.

As part of this renewal of the cabinet, President Maduro also appointed Admiral in Chief Remigio Ceballos Ichaso as Minister for the Interior, Justice and Peace.

Félix Plasencia will become the new minister for Foreign Affairs, while Jorge Arreaza, who headed that ministry for the last four years, will now head the Ministry of Industries and National Production.

Moreover, the Ministry of Ecological Mining Development will be directed by William Serantes Pinto, and Mervin Maldonado will become Vice President of the Government for Social and Territorial Socialism.

President Maduro stated that Admiral in Chief Carmen Meléndez and Eduardo Piñate, both former ministers, will now focus on their commitments as candidates for regional office in the upcoming elections of November 21.

Featured image: Roside Virginia González is the new minister for the Indigenous Peoples of Venezuela. Photo courtesy of Aporrea.