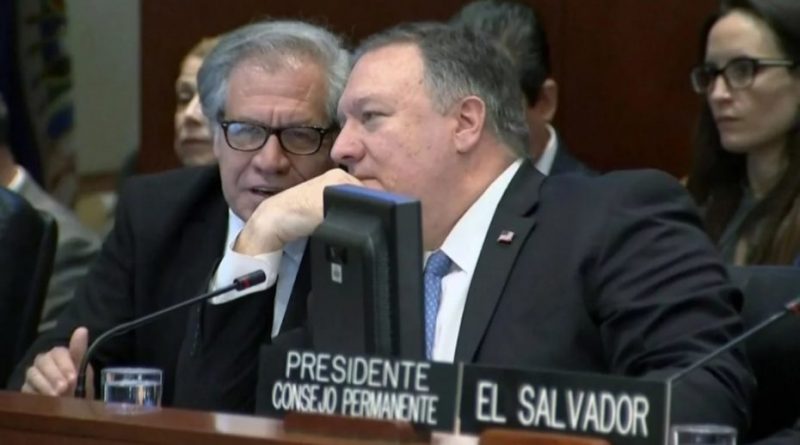 Some 18 delegations from member countries of the OAS refused to join the interventionist statement against Venezuela that was promoted by the United States.

The Organization of American States (OAS) held Thursday a session to ratify an interventionist declaration against the constitutional government of the President of Venezuela, Nicolás Maduro, and in favor of the illegal actions of the right of that country.

The correspondent of teleSUR, Alina Duarte, informed that 18 nations refused to join the proclamation that establishes interventionist actions.

The statement was presented by the delegation of Argentina and promoted by the United States (US) and intended that member countries recognize as President the opposition deputy Juan Guaidó, who proclaimed himself in an act that is unconstitutional and void.

“The image (in the OAS) was the Secretary of State (of the United States), Mike Pompeo, at the head of all together with the Secretary General, Luis Almagro, dictating practically the policies that the rest of the Allied Governments were dedicated to repeat until tired,” he said.

In addition, he indicated that the new discourse implemented by these governments is about a supposed humanitarian aid that seeks to “put pressure on intervention in Venezuela,” after the United States itself has imposed economic sanctions against the South American nation.

“With his protest, he revealed the macabre coup plan against Venezuela, we will always win, thank you,” said the Venezuelan diplomat.

During the intervention of Secretary of State, Mike Pompeo, the activist raised a banner that had the message “a coup is not a democratic transition!”