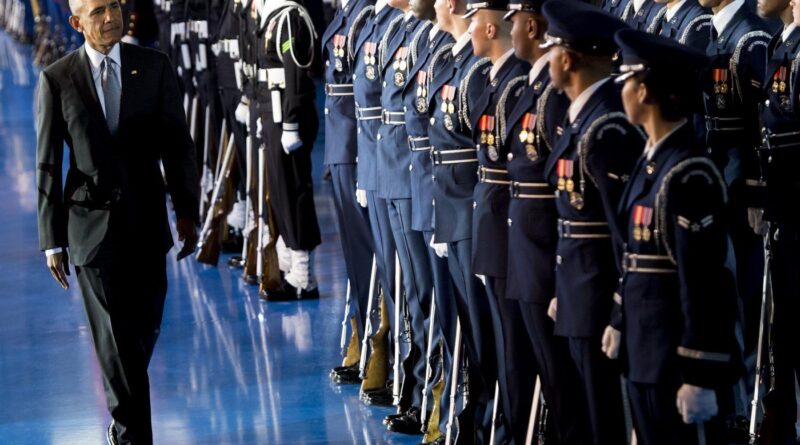 Strikes killing thousands of people, many civilians, one of the largest blemishes on former president’s record

November 16, 2020.-  Barack Obama has forcefully defended his controversial killer drone policy in the former US president’s first memoir written after his eight-year tenure in the White House.

In an excerpt from A Promised Land published in the Sunday Times ahead of its release on Tuesday, Obama said the evolving face of warfare meant that he had to resort to “more targeted, non-traditional warfare”.

Compared to his predecessor George W Bush, drone strikes under Obama increased tenfold, resulting in thousands of deaths in Afghanistan, Somalia and Yemen, among other countries.

But rights groups have consistently questioned the legality of such strikes and their precision, and have argued that well into Obama’s presidency, dozens of civilians were being killed in the ruthless pursuit of a single target.

Obama’s drone policy has been viewed as a significant blemish on his reputation as a president, with some regarding it as the most dangerous aspect of his legacy.

Defending his policy, Obama wrote that the often young men and boys he targeted “had been warped and stunted by desperation, ignorance, dreams of religious glory”.

“They were dangerous,” he writes. “The world they were a part of, and the machinery I commanded, more often had me killing them instead.”

Obama expressed some support for the controversial counterterrorism policies and interventions launched by his predecessor, President Bush.

“Unlike some on the left,” he writes, “I’d never engaged in wholesale condemnation of the Bush administration’s approach to counterterrorism.”

However, Obama was critical of Bush for having “spun the intelligence to gain public support” for the Iraq war, which he considered to be “as big a strategic blunder as the slide into Vietnam had been decades earlier”.

Still, along with the war in Afghanistan, which he also inherited from Bush, Obama writes that “it hadn’t involved the indiscriminate bombing or deliberate targeting of civilians that had been a routine part of even ‘good’ wars like World War II.”

‘Unlike some on the left, I’d never engaged in wholesale condemnation of the Bush administration’s approach to counterterrorism’

With “glaring exceptions like Abu Ghraib”, the former president says, “our troops in theatre had displayed a remarkable level of discipline and professionalism”.

However, critics have called into question the United States’ record in both wars, linking the rise of militant groups such as the Islamic State to the US-led interventions.

In September, an authoritative report by Brown University in the US said more than three million people had likely been killed as a result of America’s two-decade war on terror, including deaths caused by hunger, disease and the collapse of health systems.

The report, released by the university’s Costs of War project, further claimed that at least 37 million people, mostly civilians, had been displaced from Afghanistan, Iraq, Pakistan, Yemen, Somalia, the Philippines, Libya and Syria – countries largely targeted by the “war against terror” initiated by Bush in the wake of 9/11 and continued by Obama.

The study said “the scale of displacement across the eight countries surveyed likely reaches levels only seen in the Second World War”.

Obama writes of the need to “root out” suspected al-Qaeda militants across the world, and won plaudits for the US killing of Osama bin Laden in 2011.

Obama oversaw more strikes in his first year than Bush carried out in his entire presidency. A total of 563 air strikes, mostly by drones, targeted Pakistan, Somalia, and Yemen during Obama’s eight years in office, compared to 57 under Bush, according to the Bureau of Investigative Journalism.

Obama’s administration also carried out hundreds of strikes in Libya and Syria. The Council of Foreign Relations (CFR) estimates that 3,797 people were killed in drone strikes during Obama’s tenure, including 324 civilians, a number that is disputed.

The expansion was enabled by Obama’s embrace of so-called “signature strikes” that allowed fire on gatherings of suspected militants. As Obama reportedly told senior aides in 2011: “Turns out I’m really good at killing people. Didn’t know that was gonna be a strong suit of mine.”

The full extent of Obama’s aerial war remain unknown. But the Council on Foreign Relations’s Micah Zenko has calculated that in 2016 alone, the Obama administration dropped at least 26,171 bombs, amid a mounting campaign against the Islamic State group in Iraq and Syria.

This amounts to an average of three bombs being dropped every hour, 24 hours a day, across Syria, Iraq, Afghanistan, Libya, Yemen, Somalia and Pakistan.

In A Promised Land, Obama doubles down on his critics, arguing that the changing nature of the battlefield required new forms of warfare.

Because “al-Qaeda had scattered and gone underground, metastasizing into a complex web of affiliates, operatives, sleeper cells, and sympathizers connected by the internet and burner phones, our national security agencies had been challenged to construct new forms of more targeted, nontraditional warfare – including operating an arsenal of lethal drones to take out al-Qaeda operatives within the territory of Pakistan.”

Obama says the “dangerous” young men he targeted were actually people he wanted to support, but could not.

“They were dangerous, these young men, often deliberately and casually cruel. I wanted somehow to save them – send them to school, give them a trade, drain them of the hate that had been filling their heads. And yet the world they were a part of, and the machinery I commanded, more often had me killing them instead.”

Rights groups, meanwhile, have doubted the extent to which those targeted by the US military machinery under Obama were actually militants.

Reprieve, the London-based rights group, has pointed out that the US regards all military-age males – boys and men over the age of 16 – in a strike zone as legitimate targets unless evidence is brought to light after their death proving them innocent.

This has allowed US officials to controversially claim low civilian casualty figures and a high number of militants killed.

‘They were dangerous, these young men, often deliberately and casually cruel. I wanted somehow to save them – send them to school, give them a trade, drain them of the hate that had been filling their heads’

The lack of due process involved in such strikes was at the centre of a case brought by the American Civil Liberties Union(ACLU) against the Obama administration over what they argued were the extra-judicial killing of three US citizens in Yemen in 2011, among them the cleric and suspected militant Anwar al-Awlaki and his 16-year-old son, Abdurrahman al-Awlaki.

Jameel Jaffer, deputy legal director of the ACLU said: “If the government is going to be firing Predator missiles at American citizens, surely the American public has a right to know who’s being targeted, and why.” US courts dismissed the case.

Reprieve has also raised questions over the precision of drone strikes. Between 2002-2014, analysis by Reprieve shows US drone strikes in Yemen and Pakistan killed as many as 1,147 unknown people in failed attempts to kill 41 named individuals.

In targeting al-Qaeda chief Ayman al-Zawahiri, the CIA killed 76 children and 29 adults, said Reprieve. They failed twice, and Zawahiri is not thought to have been killed.

Obama writes that as he came into office he decided to set about “fixing” his predecessor’s counterterrorirsm policies, rather than “tearing it out root and branch to start over”.

“One such fix was closing Gitmo, the military prison at Guantánamo Bay – and thus halting the continuing stream of prisoners placed in indefinite detention there.”

The executive order to close the prison was signed on just his second day in office, as was another to end “enhanced interrogation techniques”, forms of torture such as waterboarding, rectal rehydration and sleep deprivation.

“It became clear pretty quickly that putting the fallout from past CT [counterterrorism] practices behind us and instituting new ones where needed was going to be a slow, painful grind. Closing Gitmo meant we needed to figure out alternative means to house and legally process both existing detainees and any terrorists captured in the future,” he writes.

When a heavily redacted Senate intelligence report in 2014 offered a glimpse into the CIA’s use of torture methods against suspects in its custody as part of its covert intelligence programme, Obama admitted the US had “crossed a line”.

“When we engaged in some of these enhanced interrogation techniques – techniques that I believe, and I think any fair-minded person would believe were torture – we crossed a line,” he said at the time. “We tortured some folk.”

Despite this admission, some have pointed out that less severe forms of abuse and humiliation were not ruled out.

Meanwhile, by the end of his presidency in 2016, 41 prisoners remained in Guantanamo some of whom were cleared for release.

Obama blamed an impasse in the Republican-dominated Congress for his failure, but rights groups have said that he was slow to act in his first term when the chamber was in Democrat hands.

“The failure to close Guantánamo is an epic one,” said Laura Pitter of Human Rights Watch in 2017, “not just because so many lives have been destroyed by years of unlawful and unfair detentions and torture, but because Obama hands Trump the ability to keep using it.”

Just one prisoner was transferred from the detention camp during Trump’s tenure.