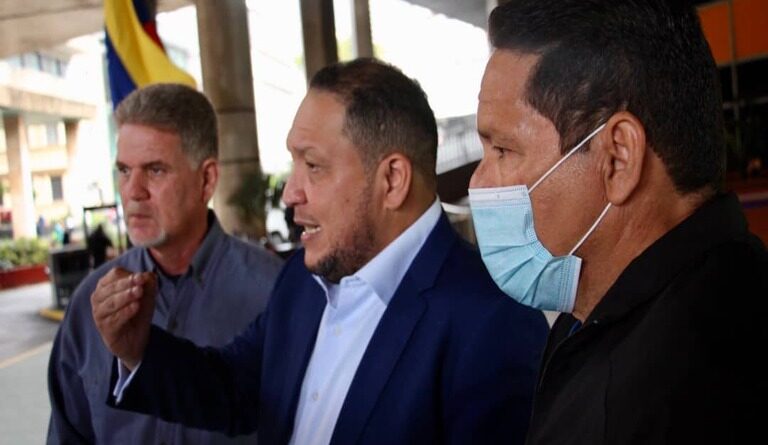 This Thursday, December 2, José Brito, a deputy representing Justice First in Venezuela’s National Assembly, asked the National Electoral Council (CNE) to repeat the regional and municipal elections in Pariaguán (Anzoátegui State) after the disqualification of the victor Tomás Bello.

In the company of the candidate for the Democratic Alliance for mayor of the Miranda municipality of Pariaguán, Tomás Bello, Brito went to the headquarters of the CNE to challenge the electoral process of that jurisdiction. He denounced that, following the disqualification of the elected candidate, a substitution of candidates was not allowed, which “mocks the will of a people who voted in the majority,” a press release reported.

“The Democratic Alliance was left without a candidate in that municipality, and worse still, the invalid votes exceeded the votes that gave the person they proclaimed as mayor the winner,” said Brito.

The candidate Tomás Bello said that to justify his disqualification, the CNE claim that he did not present his sworn statement of the cessation of his duties in Miranda municipality.

“We ask the CNE and the regional electoral board to take each of the allegations of this challenge into consideration,” said Tomás Bello.

He stated that his previous management was audited every year and his credit rating was inspected. For this reason, he considers that this action violates his right to be elected by a constituency that recognizes his effective management of the Miranda municipality.

“In May 2018, I presented my sworn statement, and even asked the Comptroller General of the Republic to update it, and at that time I was notified that I did not have any irregularity or debt,” said Bello.

Finally, both asked the Regional Electoral Board to revoke the swearing in of the person who was awarded the victory in that municipality, and proceed to repeat the elections in Miranda municipality of Anzoátegui state.