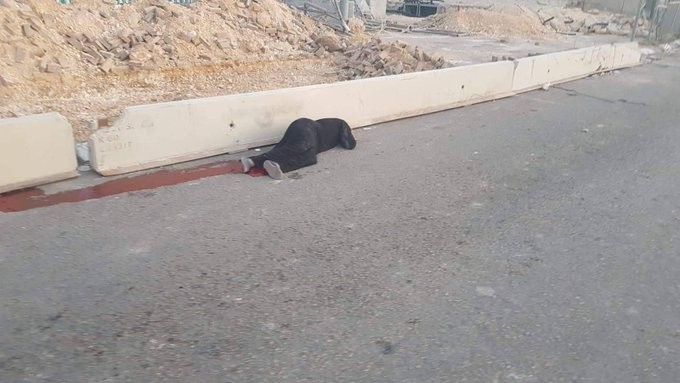 Israeli forces fatally shot a Palestinian woman near the Qalandiya checkpoint separating Ramallah from Jerusalem in the occupied West Bank on Wednesday.

Israeli police claimed that Alaa Wahdan was walking towards its forces on a pathway designated for vehicles when they asked her to stop.

They added that the 28-year-old from nearby Qalandiya refugee camp pulled out a knife before a security guard shot and injured her in the legs.

In the video above, Wahdan appears to pose no plausible danger to anyone around her when she is shot.

“They could have controlled her,” bystander Mohammed Hammad Jaradat told the publication Middle East Eye.

“They were five soldiers and she was some seven meters away.”

According to eyewitnesses, Wahdan was left to bleed without first aid.

Photos show the woman lying on the ground in a large pool of blood.

RELATED CONTENT: Haaretz Editor: “For Palestinians Murder is a Type of Sport, Perhaps a Substitute for Erotica”

She was eventually transferred to Hadassah hospital in Jerusalem for treatment, where she was pronounced dead.

Occupation forces have habitually denied first aid to Palestinians they have shot, causing them to bleed to death.

No Israeli soldiers were injured during the incident, as in many previous cases in which an alleged Palestinian attacker was killed.

Palestinians in a nearby vehicle filmed the shooting and circulated the video on social media. In the video above, they can be heard saying, “he shot her in the leg.”

A metal object appears to fall near Wahdan, which one of the armed Israelis kicks with his foot.

Israeli police spokesperson Micky Rosenfeld tweeted a photo of the knife he claimed Wahdan had carried:

Rosenfeld claimed Wahdan was “injured moderately” – although she died shortly after she was shot.

Although Wahdan was identified by Israeli newspaper Haaretz, Arabic-language Palestinian media haven’t named her. Some news reports said she was in her fifties.

Saleh Higazi, deputy director of Amnesty International’s Middle East program, said that Wahdan “did not appear to be carrying a firearm and did not pose any immediate threat to the guards or to the lives of people in the vicinity when they opened fire.”

“This strongly suggests that her killing may have been unlawful,” Higazi stated.

Higazi added that “the complete lack of accountability for Israeli forces who carry [out] human rights violations” is what allows the pattern of unlawful killings to continue.

Palestinian resistance organization Hamas called Israel’s “cold-blooded” killing of Wahdan a continuation of the “criminal sadism of the occupation army in killing and firing at the weak and defenseless.”

Israeli forces killed a young woman and her teenage brother at the same checkpoint in April 2016.