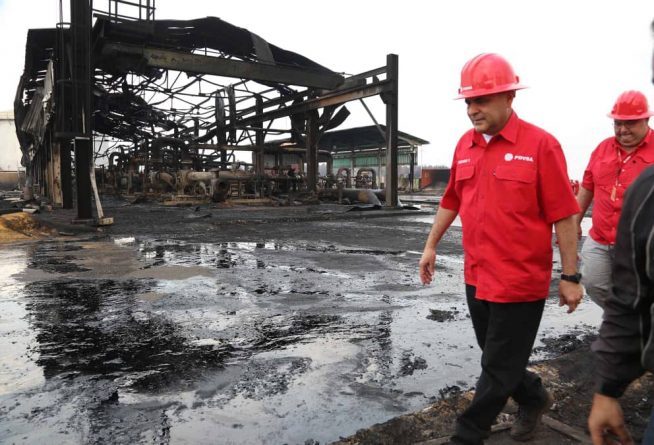 Petróleos de Venezuela, SA (PDVSA) on Tuesday controlled a fire in the pump room of the Ero Station, located at kilometer 50 of the trunk 36, via Morichal – San Tomé, in the operational areas of the Carabobo Division, of the Orinoco Oil Belt “Hugo Chávez”, which was caused by an act of sabotage perpetrated by the opposition right, informed the Minister for Petroleum and president of PDVSA, Manuel Quevedo.

Minister Quevedo announced that the terrorist act against the Venezuelan oil industry occurred hours after Donald Trump, with his warmongering speech, incited violence and war.

From the Carabobo Division, the minister toured the facilities of the Ero Rebombeo Station, and the pumping room, which was hit by the flames originating from a warmongering act which fortunately did not result in human losses or injuries of any kind.

During the tour he was accompanied by Miguel Quintana, Vice President of Exploration and Production, as well as Evenin Boscán, Executive Director of Production of the Orinoco Oil Belt (FPO) and authorities of the Carabobo Division; as well as oil workers.

The state oil company reported that as planned within the Contingency Plan of Pdvsa, the multidisciplinary team belonging to the Operations Management of Production, Maintenance, Operational Coordination, Integral Safety, Environment, Legal Affairs, Industrial Safety and the Prevention and Control Brigade of the oil industry, deployed in the area to extinguish the fire, and execute the most expeditious and safe strategy for the restart of the station, in order to guarantee operational continuity.

The Ero Station has an installed capacity of 300 thousand barrels of crude oil per day, segregation of Merey 16 type oil, coming from the production of the Petrodelta Mixed Companies, Petrocarabobo, Petroindependencia and the Morichal District of the Carabobo Division.

With these actions, the fighting force of PDVSA demonstrates its high level of commitment and professionalism to efficiently attend to the eventualities in the operational areas of the largest oil reservoir on the planet.